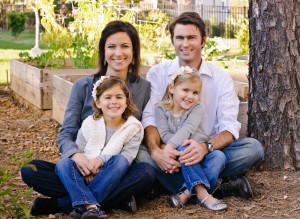 A little over a year ago, I radically changed my family’s diet from what most American’s would consider to be “normal food” to strictly “real food.” Before making this drastic change we thought we were making fairly healthy food choices, but I now realize those decisions were heavily influenced by what the food industry defines as “healthy.” I was planning our meals around supermarket sales and coupons, allowing our kids to indulge in fast food on occasion, and–I admit–eating my sandwiches on store-bought white bread. I’ve always had a love for cooking, but never once did it occur to me to plan our meals around the fresh, local food that was in season, nor did I ever think to read, much less scrutinize, the ingredient list on a food product before buying it.

My family has come a long way since then thanks to a series of events that included an Oprah show, a book by Michael Pollan called In Defense of Food, and the documentary Food, Inc. It was quite a wake up call to learn that what we thought were “healthy” food choices were actually highly processed and not the best choices at all. It also hit home to hear Pollan call the processed packaged foods in our pantry “food-like substances.” I felt compelled to make some immediate and drastic changes to our diet, but I honestly didn’t even know where to begin. I lost a lot of sleep over what I would feed my family if I could no longer rely on Goldfish, Fruit Snacks, and Wheat Thins.

So, after some extensive research and a lot of label reading, my “all or nothing” personality decided to take my entire family–including my husband and our three-and five-year-old daughters–on the journey of our lives. Beginning in May 2010, our family took a pledge to go 100 days without eating a single ounce of highly processed food or refined ingredients. We devised some basic rules to live by including no white flour, no sugar, and nothing out of a package with more than five ingredients. And while it was of course difficult at times these guidelines ensured that we would focus on foods that were, as Pollan said, more the product of nature than “the product of industry.” I just had to prove this could be done, but what I did not expect were the amazing changes to our health or the profound and surprisingly permanent impact on our eating habits.

For 100 long days–whether we were at home, traveling, at a birthday party, or out to eat–our family strictly indulged in whole grains, organic fruits and vegetables, meat from our local farmers’ market, wild-caught seafood, nuts, dairy products, and natural sweeteners in moderation. I blogged about the highs and lows of our journey online and also invited readers to join us by pledging to follow our same “real food” rules for only 10 days. So far over 1,000 people from Austin to Australia have taken the pledge with us and a growing community of hundreds of thousands more have followed along and been inspired to make at least some positive changes to their diets. We’ve been thrilled with such an amazing response from both readers and the media, but there was one piece of feedback we could not ignore. While everyone thought eating fresh, local, whole, organic, real food sounded wonderful they also thought this type of diet would be way too expensive to adopt on their own.

So in October 2010, we decided to take this feedback to heart and embark on yet another 100 Days of Real Food journey. Except this time it would be on a tight budget. And not just any budget…we would eat real food and real food only on less money than we would have if we were on full food-stamp (SNAP) benefits. Our family of four had to learn to survive on no more than $125 a week. Sure we struggled at times, but we never neglected to put a wholesome “real food” meal on the table. And we also learned a lot along the way as well.

We learned about making sacrifices–like drinking water instead of milk and eating frozen organic berries instead of fresh. We learned to go days without eating any meat. And we also learned to go even longer without eating any dessert or other “real food” sweet treats like our beloved chocolate powerballs that are sweetened with dried dates. Never relying on coupons or supermarket sales, we were forced to plan out our meals for the week, avoid waste, and be creative with the food that we had on hand. We never gave up shopping at the “expensive” health food supermarket nor did we give up our $30/week fresh local milk delivery. All in all, we stuck to our guns and never once had to give in to processed junk or go over budget!

After proving our point with the real food on a budget pledge we realized there was one more thing we needed to tackle. While we’ve received an overwhelming response from people signing up for the 10-day pledge, we knew there was a large subset of blog readers out there who didn’t think they could join us “all or nothing.” So in March 2011, we decided to launch some “real food” mini-pledges where we would challenge readers to cut out processed food one step at a time. Each week we announce a new mini-pledge along with tips, resources, and recipes to help everyone along the way. So far we’ve tackled meat, beverages, fast food, deep-fried foods, low-fat products, and whole-grains. A new pledge is announced every Friday so check out http://www.100daysofrealfood.com to learn more and follow along.

Our 100 Days of Real Food journey has been full of so many surprises, challenges, and enlightening experiences that we’ve made it our mission to influence others to embrace the emerging real food movement. We hope that the detailed account of our typical suburban family’s drastic transformation inspires others to give their next meal a second thought. If we stop buying the highly processed junk food then manufacturers will stop making it–so remember to vote with your dollars! I look forward to reporting back soon on CivilEats.com so I can continue to share the lessons we’ve learned from our real food journey.