Voodoo In The Vineyard | Civil Eats

Voodoo In The Vineyard 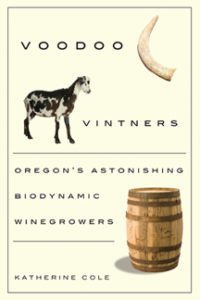 “Oregonians tend to be tough, hard-headed, and slightly insane,” writes Katherine Cole in her new book, Voodoo Vintners: Oregon’s Astonishing Biodynamic Winegrowers. Characteristics like these explain what makes Oregon so suited to play host to a growing number of biodynamic wineries. Cole, a Portland resident and wine columnist for The Oregonian, tackles her subject with welcome humor and a light touch which make for an informative and highly readable book. Her focus is mostly on Oregon, but the book also touches on biodynamics in California and France.

Taking on the role of reporter, Cole chronicles a number of notable figures within Oregon’s biodynamic wine world–many of which veer far from the beaten path. Several of the vineyards profiled were established by immigrants whose choice to grow biodynamically suggests a link between today’s viticulture and long-established Old World agricultural traditions: plant and herb based remedies, compost, and crop calendars based on the position of the stars and the moon.

At a glance, biodynamic agriculture is not so different from organic. Both require farmers to avoid chemical fertilizers and pesticides. But unlike organic farmers, biodynamic growers rely on a repertoire of earthy–some say witchy–mixtures, known as “preparations,” which must be stirred according to exacting instructions, and then sprayed on the vineyard’s vines. Preparation 500, a “cow horn packed with the manure of lactating bovines,” needs to be buried at a depth between two and a half and five feet over the course of a winter. For another preparation (number 502), growers are instructed to stuff deer bladders with yarrow flowers and then hang them amid the vines.

Instructional preparations lead to labor-intensive practice which requires a fairly serious commitment from vintners. But hard work does not dissuade enthusiasts who believe in the basic principles of biodynamics. Describing her first impression of Jimi Brooks at Momtazi Vineyards, Cole captures a kind of spirituality that seems to come with the terrain:

The practice was so new to me then that I could have sworn there was a giant black witch’s cauldron in that shed. But really, I rather think in retrospect that it was a plain old barrel. His stirring implement was a handmade switch broom hanging from the ceiling—I think. Jimi struck me as a spiritual person, but he also had a wicked sense of humor. If biodynamics sounded like witchcraft to some people, so be it: he would make like a witch and stir his preparations with a broom.

The history of the biodynamic movement is not overlooked in Cole’s coverage of modern day vintners. Voodoo Vintners explores at length the legacy of Rudolf Steiner, whose lectures, “Spiritual Foundations for the Renewal of Agriculture,” provide the foundation for modern biodynamic growers. Steiner was a multi-talented doer who brought us the Waldorf school, published a book-length study of Goethe, and founded anthroposophic medicine, a discipline that focuses on homeopathic remedies and holistic healing practices like massage. But Steiner’s legacy can be as much an obstacle to a wider acceptance of biodynamic farming as it is an inspiration to advocates, in part because his lectures sometimes sound, well, insane: “In a horn you have something that can radiate life, and even astrality…If you could crawl inside the body of a cow…you would be able to smell how living astrality streams inwards from the horns.” Still for believers, biodynamic certification is offered through Oregon’s Demeter USA.

Biodynamic farming has a historic leader, modern day followers, and a certification program to legitimize the practice, and yet the concept still remains elusive and difficult to describe without lengthy explanations. “When discussing biodynamic agriculture, we struggle with a way to describe it in just a few words,” writes Cole. “It’s über-organic. It’s witchcraft farming. It’s voodoo in the vineyard. It’s all of these things, and none of these things.” The challenge in defining the term is that biodynamic represents a way of thinking more than any single practice.

The value of connectivity–that between vineyard and wine–can lead to better fruit with higher Brix levels. As a seasoned wine critic, Cole does not say outright that biodynamic makes for a better wine, but the wines she describes are often preceded by adjectives like “delicious” and “fascinating.” In a way, though, flavor is almost beside the point. A great wine may be the winery’s ultimate goal, but what motivates many biodynamic growers is harder to put a finger on: it’s spiritual. The biodynamic wine industry makes up only around five to six and a half percent of Oregon’s wine lands–just a small sliver of the state’s wine production–but given the potential for climate change to affect vineyards, greener growing practices will likely become more important in the years to come.

Old tastemakers, like critic Robert Parker, may be skeptical of the practice, but a new generation of wine lovers have emerged in recent years who are, according to Cole, “young, idealistic,” and “borderline certifiable.” Their ranks include madcap video blogger, Gary Vaynerchuk of “Wine Library TV” and the “Daily Grape” iPhone app; “poet-philosopher” wine importer, Kermit Lynch, whose small store sells a range of hard-to-find French wines; and “terroiristes,” folks vigilantly devoted to growing practices that let the soil and climate of the vineyard show through in the wine itself.

As a field report from Oregon’s thriving sustainable wine country, this book delivers. What’s more is that Cole’s book is not just aimed at wine geeks (though it will certainly appeal to them). Voodoo Vintners is an enjoyable—and necessary—read for anyone who might want to take wine in a more sustainable direction, or for those readers who would like to raise a glass to the people who are already working to make it happen.