When it Comes to Food, One Size Doesn’t Fit All (VIDEO) | Civil Eats

When it Comes to Food, One Size Doesn’t Fit All (VIDEO) 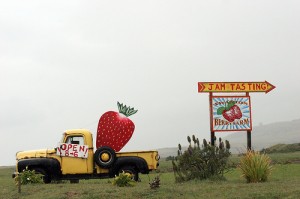 With strawberries lining grocery shelves from Boston to Tokyo, some say that global food supply chains are becoming ever more complex. In one sense, that’s true: speeding fresh-picked fruit across the country, or around the world, is no small trick. But in order to achieve this, it is actually necessary to simplify the way food is grown—to turn food from a source of nutrition and local pride into an industrial commodity produced by industrial-scale farms.

Having farmed for over three decades, I’ve watched it happen. The world of agriculture has become less complex, and less resilient.

Our global, industrial food system is causing a slow erosion of the rich complexity that used to exist in farming communities around the world. As food corporations grow ever larger, shrinking wallets force more and more growers to leave their farms and communities to work for a big company growing a single crop. Money flows away from their community to a handful of people, often living far away. And as their community life slowly succumbs to changes in global agriculture, somehow human dignity erodes as well. Social problems worsen. The complex social and environmental web gradually breaks down, with people–and plant and animal species–falling through the cracks.

Of course, global suppliers say that in order to produce strawberries and other foods on a scale necessary to supply the world market, you have to make some trade-offs. Maybe drop some varieties that don’t ship well. OK, I’ll buy that.

But what about the way in which strawberries are produced? Much like Henry Ford’s assembly line, churning out berries for a global market requires a transformation of growers into incredibly efficient, centralized farms. Instead of a diverse mix of farm scales and crops, you end up with industrial-scale operations, with hundreds of employees growing a standardized product. Less diversity, less care, and some serious consequences for the environment, the people working on the farm, and those living nearby.

In 1983, when I started experimenting with growing organic strawberries in California, everyone in the industry told me that it couldn’t be profitable on a commercial scale. At the time, the pesticide of choice for berry growers was methyl bromide, a highly toxic fumigant that even the EPA has admitted can damage the neurological system, the lungs, and the ozone layer. Many other toxic chemicals were de rigueur in strawberry production. Even today, the increasing use of methyl iodide (VIDEO) as a soil fumigant threatens human health in a very worrisome way.

Back then, I wanted to prove that it was possible to grow a commercially viable crop of strawberries without depending on all these chemicals. I talked with old-time farmers, read some of the pre-WWII literature, talked with Stephen Gleissmann of the Agroecology program at UC Santa Cruz, and tried a lot of ideas based on hunches and intuition. At the time, there was no “how-to” guide to organic strawberry production. It was all trial and error. But by using traditional methods of crop rotation and nurturing the surrounding ecological balance, I was finally able to grow a commercially successful crop.

Swanton Berry Farm gradually expanded to about 45 people working over 200 acres of leased land along the central coast of California, about 65 miles south of San Francisco. We’ve now been certified organic for 24 years, and we proudly grow 20 acres of strawberries, as well as blackberries, kiwis, artichokes, broccoli, cauliflower, peas, celery, brussels sprouts, and a few other vegetables.

But even as I discovered new (and old) ways of growing, I turned my attention to the larger context: the people and the community involved in the farming process.

By then, there was a lot of talk about organic farming–about the bugs and soil and plants. But what about the people who work a piece of ground in order to coax a living out of it? What about their livelihoods, their communities?

We decided to begin to address these issues by negotiating a contract with the United Farm Workers, founded by Cesar Chavez back in the 1960’s. In 1998, we became the first organic farm in the country to join with the United Farm Workers, and we’ve had a very successful relationship ever since. Apart from tangible benefits like health and dental insurance, a pension plan, paid holidays, and vacation pay, there are significant intangible benefits that come with the professional relationship that a union contract brings. Our employees are professionals and have all the rights that come with that status.

Our employees are intimately invested in the farm, and have ownership to show for it. Through our Employee Stock Ownership Plan, all employees receive bonuses in the form of stock in the company. They own about 12 percent of the company now, and their ownership share is increasing every year. Employees participate in major decisions–from production to marketing to personnel policies–because they know they are vital partners in the operation.

But because good workplace benefits raise the cost of production, it’s been a struggle to get even organic farmers to incorporate unionization into their labor forces. On the one hand, it makes sense–higher labor costs mean an even more expensive product. But in our view, sustainability goes well beyond protecting the environment. That’s why we’re trying to lead by example to further better labor practices in the organic industry.

While in our little corner of the world we are working to develop a new business model for organic farming, the fact remains that the current world food system requires standardization, large scale, and “simplified” streams of money flowing through a few major pipelines. A few people are making good money, and the rest are working for them. All the rich complexity–social, cultural, economic, and environmental–of a small farm community is disappearing fast. Most people engaged in “farming” now work for a big company. Too simple.

But the good news is that there is a significant counter-trend to revitalize farming communities and re-create the local food systems that used to support healthy communities. Right here in California, I’m proud to say that while I started as nearly 100 percent of the organic strawberry market, my market share is down to about one percent. That means more growers–well, more than 100 of them for strawberries alone–are finding sustainable growing profitable.

And even more gratifying is the fact that more and more organic farmers are improving their labor standards. But nonetheless we–all of us–have a long way to go before we can say that we are truly sustainable in the broadest sense.

Winning a Growing Green Award from NRDC is a milestone for our industry in that a major environmental group is recognizing that true sustainability must include better wages, benefits, and working conditions for the workers and communities that grow our food. It is an award not just for Swanton Berry Farm or myself, but for an entire generation of people who have been doing their best to follow a truly holistic vision of sustainability.

Jim Cochran has been a pioneer in sustainable food production for more than three decades, starting the first organic strawberry farm in California in the 1980s, before the industry thought that organic growing could be profitable. Jim’s vision of sustainability goes well beyond environmentally friendly growing practices, as his farm incorporates fair labor policies and encourages other organic farmers to do the same. Read more >