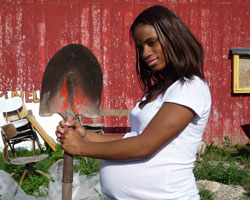 Recently a Detroit public high school that focuses on farming and second chances for young mothers was added to a list of schools that would be closed this summer. Catherine Ferguson Academy is on that list thanks to a new law that allows Michigan governor Rick Snyder to dismiss locally elected officials and put in place new ones. (I’ll let Rachel Maddow give the details in the video, below).

You might have heard that Detroit lost 25 percent of its population in the last decade. What has resulted is a lot of abandoned land and a lot of blight. And yet, Detroit is also home to an urban agriculture Renaissance, with projects like the Greening of Detroit and D-Town Farm, among others. Catherine Ferguson Academy is just one such place that offers opportunities in growing food to those who need it most.

Principal Asenath Andrews recognized that opportunity and created a vision that helped propel her students to success. “I need to figure out how kids can make around $20,000 a year minimum farming,” she said in a film that features the school, Grown in Detroit. Her graduation rate is 90 percent, and all of her students are being taught and tested with the expectation that they will go on to college. She even helps them find the money to make that happen. Meanwhile, they grow vegetables, raise animals, and are given childcare and health services at the school. Their school and work were even featured by Oprah’s magazine.

The students aren’t taking this threat to close their school lightly. Last week, some were even arrested as they protested the move.

If you feel moved to support the school, you can sign a petition here, and there is a fundraiser going to pay the legal fees of those fighting the closure here.

Here is Rachel Maddow’s coverage of the story from last Friday:

Photo: via Grown in Detroit