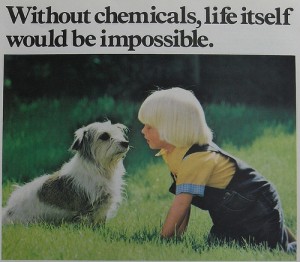 Chemicals and additives found in the food supply and other consumer products are making headlines regularly as more and more groups  raise concern over the safety of these substances. In a statement released yesterday, the American Academy of Pediatrics (AAP) asked for reform to the Toxic Substances Control Act of 1976. The group is particularly concerned about the effects these substances have on children and babies.

Last month, the U.S. Food & Drug Administration (FDA) held hearings on the safety of food dyes but failed to make a definitive ruling—the most recent study on Bisphenol-A (BPA) added to growing doubts about its safety but the FDA’s stance remains ambiguous. Meanwhile, in 2010, the Government Accountability Office (GAO) reported that the FDA is not ensuring the safety of many chemicals.

Yet while the FDA drags its heels and hedges on the safety of these substances, Americans are exposed to untested combinations of food additives, dyes, preservatives, and chemicals on a daily basis. Indeed, for the vast majority of Americans consuming industrial foods, a veritable chemical cocktail enters their bodies every day and according to the GAO report, “FDA is not systematically ensuring the continued safety of current GRAS substances.”

The term GRAS refers to “generally regarded as safe,” the moniker the FDA uses to regulate food additives, dyes, and preservatives. The trouble is this system is not effective. Dr. Michael Hansen, a senior scientist at Consumers Union, said in an interview that many additives in our food supply are never even tested. That’s because the GRAS designation is a voluntary process—instead of being required to register food additives, companies can notify the FDA about their product, but only if they so choose. Hansen added that even for those additives considered GRAS, he didn’t have much faith in the designation.

So just how many of these largely untested and unregulated chemicals is the average American consuming every day? As of yet, no study has determined this number nor has looked at what the effects of the various combinations might be. But according to the Body Burden Web site, there are 80,000 chemicals in commerce and the site says that, “No one is ever exposed to a single chemical, but to a chemical soup, the ingredients of which may interact to cause unpredictable health effects.”

There are only a few studies that evaluate the combined effects of food additives. One 2006 study published in Toxicology Science concludes that the combination of several common additives appears to have a neurotoxic effect: “Although the use of single food additives at their regulated concentrations is believed to be relatively safe in terms of neuronal development, their combined effects remain unclear.” Of the four additives looked at, only one is now banned in the U.S., while the rest remain in the foods on our grocery store shelves. In a 2000 study, researchers looked at the combination of four major food additives or a mixture of six typical artificial food colors and found indications of toxicity in both.

And perhaps the most alarming study dates back to 1976 from the Journal of Food Science. In this study, young rats were fed a low-fiber diet along with sodium cyclamate, FD&C Red No. 2 and polyoxyethylene (20) sorbitan monostearate individually and in combination. While the study found that any one of the three food additives given individually had little negative effect, the combination of all three additives resulted in weight loss and the death of all test animals within fourteen days. Sodium cyclamate is an artificial sweetener now banned in the U.S., but FD&C Red No. 2, a food dye, and polyoxyethylene (20) sorbitan monostearate, an emulsifier, are still in regular use in the food supply, according to the FDA’s Web site.

BPA, another regularly used chemical, has raised a number of concerns. The most recent study found that when participants switched to a diet with minimal amounts of canned foods or plastic food packaging, urinary levels of BPA decreased by more than 60 percent after just three days. According to the Centers for Disease Control (CDC), nearly all Americans have detectable levels of BPA in their bodies, which has been linked to breast and prostrate cancer, infertility, early puberty in girls, obesity, and ADHD. This study indicates how quickly the body will excrete BPA if given the opportunity, but here’s the key: The body must be given the opportunity to do so. Many Americans don’t take three-day fresh food breaks from a diet based largely on packaged and processed foods. What’s more, BPA is just one of the chemical compounds with potentially harmful effects entering into our systems.

Based on the anecdotal information I see in my client’s food journals, people eating processed and packaged foods are taking in exorbitant amounts of artificial ingredients and additives. Typically, a client will say something like, “I eat a bowl of cereal with low-fat milk, have yogurt for a snack, and a Subway sandwich for lunch.” While this sounds relatively harmless, here’s what it might actually look like based on some popular “health food” items:

The person in this example has consumed more 60 food additives eating breakfast, a small snack, and lunch alone, to say nothing of dinner, dessert, further snacking and drinks. Consumers Union’s Dr. Hansen told me, “I wouldn’t be surprised if it were up to 100 additives or more that people are taking in on a daily basis.”

And it’s not just food. A number of additional toxins also enter our systems from other industrial sources and often come in the form of phthalate plasticizers and parabens—both of which are used in personal care products, some medications, and even foods and food preservation. Most Americans use some form of shampoo, soap, lotion, and antiperspirant every day, and these toxins, applied to the skin, are absorbed dermally.

According to a 2010 study, like BPA, parabens and phthalates can clear our bodies relatively quickly but only if we aren’t exposed to them on a regular basis. The study states, “For serious health problems to arise, exposure to these rapidly-clearing compounds must occur on a daily basis.” Phthalates are associated with infertility, obesity, asthma, and allergies, as well as breast cancer; parabens are a cause for concern regarding breast cancer.

So what if it’s not the dyes alone, the preservatives alone, or the BPA alone, but some haphazard combination thereof that has yet to be studied or evaluated properly? Jason August, with the FDA’s Office of Food Additive Safety, admitted as much in his defense of food dyes in relation to ADHD recently when he said, “There were other factors in most of these studies that could have been the reason or could have gone hand in hand with the dyes to create these problems in these particular children, including preservatives.”

This is precisely why the FDA needs to be more rigorous with its testing of individual additives and start evaluating the combined effects or “other factors” that August so blithely refers to here.

Chemicals used in all of these industrial products are big business—food corporations own some of the largest personal care companies and they’re profiting on multiple fronts with cheap, industrial ingredients. For example, Nestlé owns 30 percent of the world’s largest cosmetic and beauty company L’Oreal—tightly regulating these substances and evaluating potential harm would be a financial hardship for these corporations.

But the real hardship is placed on the American people who trust that the foods they eat are properly regulated by the government and safe for themselves and their families. How long will the FDA continue to put the health of the American people at risk with its antiquated policy? Let’s hope with pressure from groups like the AAP, changing consumer demand, and continued headlines, the FDA will finally do its job.