GROW! A Film About the Next Generation of Young Farmers in Georgia | Civil Eats

GROW! A Film About the Next Generation of Young Farmers in Georgia 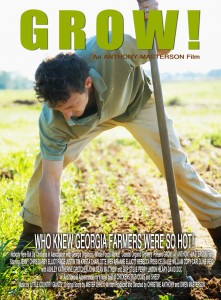 As the average age of farmers in the U.S. continues to raise, young farmers are beginning to sprout up across the nation. The recent documentary GROW!, directed by Christine Anthony and Owen Masterson, showcases the resurgence of young organic farmers in the state of Georgia. The film highlights 20 individuals across 12 farms who have found their way back to the land, whether working on a family-owned farm, buying their own, or, in most cases, using another farmer’s land to grow food for their community.

GROW! is a story that does not seek to convince the moviegoer of any particular viewpoint, but instead offers the opportunity to understand a new generation of farmer and why they seek to live a lifestyle removed from the hustle and bustle of the corporate world. “It’s a beautiful story and we wanted these young farmers to tell it in their own words; no narrator, no scientific experts, no hand wringing gloom and doom, just an honest, on the ground account of a movement taking place at this very moment in time,” said directors Anthony and Masterson.

While we might be tempted to write their farming endeavors off as young, idealistic attempts at a simple life that simply no longer exists, what we get is a picture of hardworking, passionate and, yes, idealistic 20 and 30-somethings who feel called to a “real” job with tangible results. Not least of their reasons for becoming farmers is a desire to fight injustice and create a healthier, more sustainable world by growing “clean, fair food.” Being self-employed has its perks too.

Far from the back-to-the-land movement of the 60s and 70s where, as Anthony and Masterson suggested, individuals were mainly concerned with dropping out of society and being self-sufficient, the young farmers of today are “fully engaged and participating in all aspects of society.”

“After the excesses of the 80’s and 90’s there is a sea change of values. A lot of young people no longer are drawn to earning a bunch of money working hard for somebody else in an unrewarding career.”

Add to this the fact that many young people are graduating college to find there are no jobs in their chosen career field, whether it be in accounting, chemistry or medicine, like some of the farmers in the film. But there are deeper reasons for becoming a farmer. “A lot of people of this generation want to work towards changing this world for the better, be it the environment or simply improving things in their local communities.”

The directors hope the film will inspire more would-be farmers and retired land owners to find each other and continue a legacy of small, organic farming, while working to change laws in support of small, sustainable farmers. They also hope it will encourage viewers to think about where their food comes. But viewers should also be prepared to leave with a desire to do more. As one moviegoer stated, “[it] makes me want to quit my job and become a farmer.”

To schedule a local screening of GROW! for your community or classroom, contact the filmmakers through the film’s Web site.