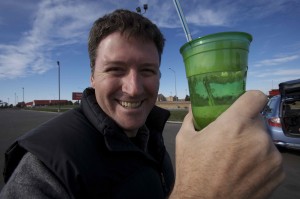 I was skeptical and sighing heavily when I pressed play to view Fat, Sick, & Nearly Dead. I immediately thought, “With such a negative title, this documentary will be a) depressing and b) preachy.”

I’m an optimistic person though–hence my dislike for the title–so I tried to toss out the judgmental thoughts and, as it turns out, my initial impression was pleasantly proven wrong.

The premise of the story is that Joe Cross, an affluent Australian businessman and director of the film, armed himself with a juicer and a video camera to wage a war against his weight in America. Predictably, Joe loses 100 pounds after a 60 day juice fast and eradicates his autoimmune disease that manifests itself as an annoying rash. (Admittedly, I scoffed at his complaining about taking a few pills a day while I watch my husband give himself six insulin shots daily along with a cocktail of pills, but, really, a disease is a disease whether a rash or a failed pancreas.) If this was the end of the film, I would think it was an indirect infomercial for a new line of juices.

But this is where the film takes a direction that is refreshing, especially after watching Jamie Oliver’s come-to-America-and-revolutionize-the-food-system, community-placed approach.

Joe has a genuine, gregarious, non-condescending manner that allows his conversations with the diversity that is America unwrap raw truths of the trajectory of our food culture. From a family that proudly only eats a home cooked meal a few times a month to a father who shrugs off dying early in front of his son even when he could change course with better eating habits, our convenience-based eating habits are exposed.

Then Phil comes along, a story one gets all too used to after shows such as the Biggest Loser. By befriending Phil, a random trucker with the same rare condition as Joe and who is severely obese, the film demonstrates how a helping hand and a healthy relationship with food can give you a life back.

And that is what the film’s mission is to do, I learned, with a campaign called “Reboot.” As the film unrolls across screens this spring, the Reboot team is partnering with the National Good Food Network to help build the supply channels to meet the increased demand for fresh fruits and vegetables this film will seed.

As a beginning farmer and advocate for local food systems, I cannot help but love the demand this film can create for local produce growers, but in the film there is no rally cry to local, sustainable or organic food, it’s just simply increased fruit and vegetable consumption. The film’s singular focus may attract more viewers, but it’s a missed opportunity to not touch upon the built environment, i.e., how many fast food chains were in close proximity to Phil’s home compared to the grocery store or farmers’ market? Why was the day’s worth of juice ingredients more expensive from the local co-op versus the big box store? Maybe Reboot as a campaign will delve more deeply into the issues the film skimmed over.

So even though I still don’t like the title, I recommend watching the film to witness how the simple act of consuming more fruits and vegetables can, in fact, reboot your life.

You can watch the trailer here: