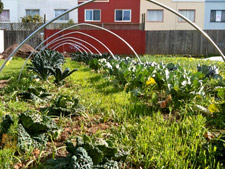 The shift will allow farming enterprises under an acre in size to grow and sell produce within city limits without an expensive conditional use permit (CUP) (previously around $3,000) or a lengthy bureaucratic process. Little City Gardens, the only for-profit farm in San Francisco, has been engaged in a year-long process with the San Francisco Urban Agriculture Alliance (SFUAA) and the Mayor’s office to draft new legislation for urban agriculture and shepherd it through the approval process. The cost of a permit is now only $300 and urban farmers will also be allowed to sell value-added products such as jams, salsa, and herb salts along with produce they grow.

Little City Gardens—whose farm near in the Mission Terrace neighborhood has earned a great deal of community support—has already announced plans for a CSA subscription program on their website. “Each week the box will include a bag of salad greens, cooking greens, roots, and herbs, as well as some form of communication (newsletter, artwork, recipe, etc) related to either the produce or the farm in general,” the site reads.

Although no one else appears ready to take advantage of the ruling just yet, Dana Perls, co-coordinator of the SFUAA, told the SF Weekly she thinks “this will have a trickle-down impact on people who work at Alemany [Farm] or Hayes Valley [Farm] who’ll be much more likely to farm their own land.”

Nonprofit urban farming groups also have the potential to have a larger impact on their communities, thanks to the new legislation. As SFUAA co-coordinator Antonio Roman-Alcalá wrote in a recent article here on Civil Eats, “Should for-benefit (i.e., non-profit) farm projects seek to raise some of their operating funds through sales, including of value-added products, this will now be allowed. This could also open the door for social justice-minded urban farms to create truly green jobs without requiring so much grant funding.”

It’s All About the Conditional Use Permit

In Oakland, the spotlight is on Novella Carpenter, the author of Farm City and an urban farmer known for her boundary-pushing experiments in backyard livestock. Until a few weeks ago, Carpenter had been selling her homegrown produce at a farm stand in her neighborhood; she stopped, however, after she was approached by a city official and told she was in violation for not having a permit.

Carpenter has blogged at length about her experience over the last three weeks as she’s struggled to untangle a knot of rules and regulations. She learned that growing vegetables on an empty lot in Oakland was in fact illegal without a permit (regardless of whether she was selling them). However, starting on April 14, when phase one of Oakland’s new urban agriculture laws took effect, that is not longer the case. Now, she’s been told, all she needs is a business license to grow and sell produce. But Carpenter’s goats, ducks, chickens, and rabbits are another case all together. Phase two of the urban agriculture laws will relate to animals, but it won’t take effect until next year. Although she raises the animals for home consumption alone, Carpenter is playing it safe. “I don’t know what kind of rules they’ll come up with and I’d rather have my CUP grandfathered in,” she says.

In the meantime, Carpenter has also been told that she may need a second permit for the farming she’s doing on property surrounding the apartment she rents, which is adjacent to the empty lot (the latter of which she owns). So, last week, she set out to raise the necessary $2,500 through her website, and on Wednesday announced that her goal had been met.

Meanwhile, thanks in part to a general petition supporting improved zoning for urban agriculture from the Oakland Food Policy Council and an outpouring of personal responses by Carpenter’s fans and supporters, Oakland mayor Jean Quan’s office has been inundated with phone calls and letters.

“I don’t want special treatment,” says Carpenter, who has been openly reluctant to ask for support. On the other hand, no one else has come forward to say they’ve been similarly fined. And, indeed, it may be Carpenter’s near-celebrity status (and a possible complaint by animal rights activists) that called attention to her farm.

The recent zoning changes in San Francisco happened in large part because of the existence of the SFUAA, which boasts nearly 50 member organizations and gained early support from Mayor Ed Lee and Supervisor David Chiu. Carpenter has some hope that the nascent East Bay Urban Agriculture Alliance, which was initiated by Esperanza Pallana from Pluck and Feather Farm, could take some of the pressure off Ghost Town Farm and initiate more of a community approach.

“It’s hard to be out on the front lines,” says the author/farmer. “I’m not made for politics.” But, as reluctant as she is, Carpenter is a powerful spokesperson for the right to farm in the city. When she learned that her home was in a zone of Oakland where farming was deemed illegal, she saw the problem as much bigger than her own. “This is a food sovereignty issue, especially in West Oakland,” she says, a traditionally under-resourced area, where grocery stores are scarce. She adds, “Folks around here have enough to deal with—and they’re not even allowed to grow chard?!”

Of course, not everyone looking to produce their own food in Oakland will take it to the level that Carpenter has. “I understand I might be an extreme example,” she says. “But I think I might be the future. More and more people are going to look for ways to grow their own food. So we have to find a way to make it legal.”

A version of this article was originally published by CUESA