Nourish: Teaching About the Food System 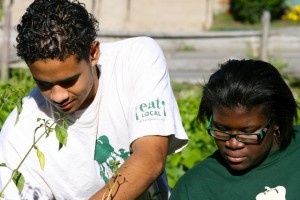 The big news out of California this past week was all about the premiere of Jamie Oliver’s Food Revolution, Season 2. This controversial show, which has plenty of detractors from within the food movement, is nonetheless the most successful effort to bring the food movement into larger public awareness that I’ve seen so far. But the same week a quieter food revolution was rolling along the West Coast: The launch of Nourish California.

As a national audience watched the dramas unfold on Food Revolution I tuned into the Twitter stream where the show was trending. Two things were clear: The show was making a profound emotional impact on viewers and these energized viewers were now clamoring to know how to make change happen in their own communities.  “I want unflavored milk at my school, too!” said one tweet. And like the brilliant evangelist that he is, Jamie has a plain-milk campaign at the ready for his energized base to plug into. But Nourish California is poised to take some of the Food Revolution buzz and direct it toward deeper and broader systems change and they’re focusing their campaign on a key change agent: Youth.

Nourish California is a pilot educational initiative (led by nonprofit organization WorldLink) whose mission is to “increase food literacy and build healthier communities throughout California.” The multimedia program includes a 30-minute special, Nourish: Food + Community, broadcast on PBS (it was shown nationwide in the fall and is being rebroadcast in California through the spring) and available on DVD, 11 short videos, a curriculum guide for grades 6-8 aligned with California state standards, and a library of topic-focused videos for classroom use (there will eventually be 45). All of these materials are free and can be downloaded (or ordered) from the Web site. Nourish will also run workshops at teacher seminars and youth summits around the state.

The goal of Nourish is to open up a conversation about sustainability with teachers and students, as well as administrators, food service workers, school garden coordinators, and health professionals. While there is a clear emphasis on nutrition education, “We’re definitely in the systems side of thinking,” says Nourish Communications Manager Brie Mazurek. And while nutritional education is a critical starting point, the program acknowledges that having the right choices available is also important–which is why a large component of the program focuses on how the entire food system works, from the soil to around the world, and how everything is interrelated.

From this foundation, says Kirk Bergstrom, Executive Director of WorldLink, “Our vision is to build a network of food-literate teachers and students who can directly contribute to the health of their schools and communities.” By teaching students a common language of food literacy (how many teens out there even know what “food system” means?) and an awareness of the different schools of thought within the food movement the program hopes to give youth a stronger voice. And California is just the beginning; as Bergstrom’s team fine-tunes Nourish in California and secures adequate funding they are expanding the program across the nation. “I think the real legacy of [Nourish] is this network that’s forming across the country,” Bergstrom says.

Obviously in a state as diverse as California a program like Nourish would have to find ways to connect with people across different ethnic communities and socioeconomic levels in order to build a strong, inclusive network. It helps that Nourish translated the student handouts into Spanish and that its materials address social justice issues. The program is also partnering with over 50 local organizations and the videos feature a diverse group of experts, including writer Anna Lappé, eco-chef Bryant Terry, and pediatrician Dr. Nadine Burke.

Dr. Burke was recently profiled in the New Yorker for her groundbreaking work with the Bayview Child Health Center. She is on the Nourish advisory board and shows the 30-minute video in her clinic waiting rooms as a conversation starter to get her patients talking about nutrition and where their food comes from. She has also been promoting the program in schools within the Bayview community and has even been working on connecting Nourish with the HMO that she works with.

Will the program have an impact in the severely challenged Bayview community? Will an activated base of youth in the area find the support they need to push meaningful food system change? I suspect it depends partly on how organized and loud those teens become. In the meantime, the Nourish program is providing some structure for youth-led efforts. The curriculum includes a concluding section called “action projects,” which shows students how to organize food projects, and encourages students to report on these projects. This reporting, in turn, can be used to inspire yet more youth while also providing Nourish with mini-case studies so the authors of the program can see how people are using it in their communities.

Bergstrom and his team are hoping this investment in youth, influencing people while they’re still young, will have an exponential, long-term payoff for both individuals and for the country. With an effective program teens internalize lessons and then pass them on to their families as well, creating a ripple effect. “Youth are a great catalyst for social change,” Bergstrom says. “Young people with their passion for issues and their ability to work on these projects can be a powerful means for transformation.”