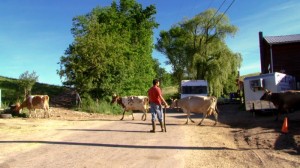 The hard-working young couple that runs Brookford Farm in Rollinsford, New Hampshire did not grow up farming. Luke and Catarina Mahoney are part of a generation of farmers raised in cities and suburbs that has returned to the land, not out of family duty, but because of their own desire to make a connection with the land.

The Mahoneys have embraced the rewards and frustrations of a life centered on the small-scale production of local food. Without inherited land, one of the major obstacles for first-generation farmers is the actual leasing of farm land that guarantees little long-term, definite success. Will their venture to grow food for their community and support themselves and their children end with success?

My film, Brookford Almanac, a cinema verité documentary currently in production, explores their story. Since reading a 2008 New York Times article about the trend of young people moving out of the city to farm, I have wanted to find out why highly educated people would walk away from specific career paths to choose a life of farming. There are a wealth of great films about food and farming but I don’t know of any that dig into the story of one, first-generation farming family. Brookford Almanac will communicate a rich sense of place through an observational lens, tracing the intimacy a farmer feels towards his land. My approach to filming the importance of small farms is not through a purely informational production, nor is it through a purely activist one. Brookford Almanac seeks to capture the grit of labor.

Now entering their fifth year at Brookford Farm, Luke and Catarina have expanded their operation considerably. They have hired a dedicated team of farm apprentices and increased their acreage. They are supplying raw milk, cheese, butter, meat, eggs, and produce to hundreds of nearby families who have come to depend on these products. But with this expansion has come problems with their landlord, a strong-willed, retired farmer who holds different opinions about the way things should be done. Because of these divergent philosophies, the landlord has decided not to renew the Mahoney’s lease. Soon they will have to leave the land that has become their livelihood. The issues of land access and cost–challenges that almost all first-generation farmers struggle with–are now harsh realities in the Mahoney’s lives. Those challenges are the focus of my film.

I am raising money for the second year of production. Please visit my Kickstarter page by April 30th to learn more about the film and become a part of the production!

Cozette Russell is a documentary filmmaker whose work explores the relationship between people and landscape. She is currently a fellow at Harvard University's Film Study Center, and she lives with her husband and creative partner Julian Russell in Lee, New Hampshire. Read more >