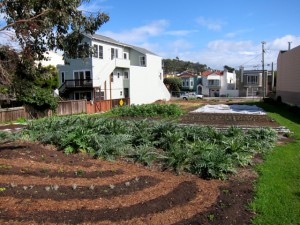 This week, the San Francisco Board of Supervisors passed one of the most progressive pieces of legislation for urban agriculture in the nation. The new legislation has amended the zoning code to allow agricultural activities in all parts of the city, as well as defining the parameters by which urban agriculturists can sell their products. It doesn’t address the touchier subjects of animal husbandry or marijuana cultivation, but has created opportunities for and the legitimacy of urban fruit and vegetable cultivation.

The legislation was the result of a rare combined and cooperative effort between city officials and urban agriculture practitioners and advocates. This was accomplished mainly through the work of the San Francisco Urban Agriculture Alliance (SFUAA), an organization of which I am a member, which formed nearly a year ago to coalesce the various efforts and projects focusing on local food and agriculture into a cohesive political voice. The coalition is made up of over 300 individual and 40 organizational members, and its formation turned out to be very well timed.

The work of re-writing the zoning code came up early in SFUAA meetings, but became more pressing when one of our members, Little City Gardens, came up against the code in attempting to expand to a new, larger plot of land. Told that converting the empty lot into a garden would cost $3,000 in conditional use permit fees, LCG opted to petition not for a personal exemption, but for a rewriting of the code.

With support from key individuals in the department, as well as in the mayor’s office, the planning department immediately went to work on crafting a new code. In that process, they consulted a zoning working group of the SFUAA, which proposed certain zoning priorities and tried to limit potential negative impacts of new zoning legislation.

For the most part, our advocacy campaign worked. For example, the original drafts contained provisions (supposedly at the express behest of former mayor Gavin Newsom) that gardens be required to have fencing, and further, fencing that is qualified as “ornamental.” Seeing as ornamental specifies made of wood or wrought-iron, this would have meant any new garden project would have had hundreds, if not thousands, of extra dollars of start-up costs. The SFUAA pushed for the the fencing requirement to be removed for new gardens, and for gardens to be given more choices. Which means that, not only will less-expensive fencing be a possibility, but we have encouraged new spaces to use their fencing to grow something (kiwi? grapes? passionfruit?).

Sadly, another of the SFUAA’s proposed amendments was not adopted. We recommended that the “change of use” fees paid to the planning department for new gardens be waived. We argued that if the city truly intends to support the flourishing of many new food-producing sites, it would behoove them to remove potential barriers to entry. In the context of an economic recession where all governments are having a hard time making ends meet, it was argued that agencies cannot make such blanket fee exceptions, even for something acknowledged as beneficial like urban agriculture. But comparing $3,000 to the $300 it will cost to get a permit with the new code, this is obviously an improvement.

One issue that the code brings up is the question of sales-focused versus community-oriented production. Many of the urban farming projects that currently exist in San Francisco (Alemany Farm, Free Farm, and Hayes Valley Farm being the three largest examples) are all focused on growing food and giving it away; none sell any produce. So how will this legislation help these projects? While a large portion of the legislation regards legalizing production for local markets, by virtue of setting up designations for urban agriculture the legislation legitimizes agriculture’s place in the urban landscape. Food that is grown for personal use is not regulated in the code; if someone has a backyard garden, this legislation won’t effect them. Should for-benefit (i.e. non-profit) farm projects seek to raise some of their operating funds through sales, including of value-added products, this will now be allowed. This could also open the door for social justice-minded urban farms to create truly green jobs without requiring so much grant funding.

Impacts on neighborhoods were also taken into account by planners in writing the code. As a result, the regulatory parameters of the legislation are based on size (less than an acre is designated “neighborhood” vs “large-scale” for more than an acre) and not whether or not the food is grown for sale or not. Any new project (for profit or not) that occurs on a large site would be legally allowable, following the permitting process (including a vetting of water-wise irrigation practices by the Public Utilities Commission). This means that, once neighbors have been notified and a permit has been secured, no neighbor will be able to complain and get a project shut down. Before this code, non-residential gardens on private property had an unknowable legal status, and could theoretically be fought by neighbors.

All told, this legislation is proof that “the system,” as ossified and change-resistant as it may seem, can occasionally work, with the combined efforts of the right people in positions of power and aware, active community members. The SFUAA’s mission and work is ongoing and constantly being developed, and we welcome input and participation (see our website for details on our mission and other non-policy-related work). Our next steps will be up to our members to formulate. Having worked to allow fruit and vegetable production and sales in the city, what steps will we take to support our other members’ work? Will we agitate for “food sovereignty” like Sedgwick, Maine? Will we create pop-up resource centers for urban farmers to access compost, mulch, and plants? Will we petition the Recreation and Parks Department to replace purely ornamental landscaping with productive alternatives? These are just some ideas, since we know that there’s plenty to do to craft the urban landscape we know to be necessary for a sustainable and equitable future.

Alliances have a long tradition within U.S. civil society, and urban agriculture alliances can be at the forefront of new movements towards food system sustainability. With the 2012 Farm Bill fast approaching, my personal hope is to see urban agriculture alliances serve as platforms for advocacy and organizing; getting urban folks working together to reorient some of the huge levers of subsidy which so distort our food system.

If you’re interested in starting an alliance in your area, or would like more information on our work, feel free to write us at info@sfuaa.org, or to me at antidogmatist@gmail.com