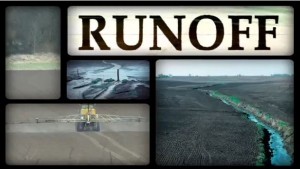 Bad federal policy and intensifying storms are washing away the rich dark soils in the Midwest that made this country an agricultural powerhouse and that remain the essential foundation of a healthy and sustainable food system in the future.

That’s the alarming finding of a new Environmental Working Group report that highlights innovative research by scientists at Iowa State University. The report is titled Losing Ground, and it shows in stark terms what industrial-scale crop production is doing to our soil and water in the Corn Belt.

In researching Losing Ground, EWG filmed Iowa farmland from the air to show graphically how recent rainstorms washed away tons of soil. Working with Atlas Films, EWG produced a short video that provides stark images illustrating how federal farm subsidies and ethanol mandates, piled on top of skyrocketing crop prices are supporting an intensive monoculture that kneecaps any hope for a more resilient and diverse food and farm system. EWG’s flights found numerous Corn Belt fields scarred by ephemeral gullies that funnel soil and toxic farm chemicals into streams and rivers before they’re plowed over again–causing damage that is not accounted for in official or even ISU’s estimates of soil erosion and runoff.

Losing Ground should be a wake-up call for policy makers and stakeholders who have been under the mistaken assumption that when it comes to soil loss, everything is more or less fine. In April 2010, the US Department of Agriculture’s Natural Resources Conservation Service issued a report concluding that soil erosion across Iowa, and the Corn Belt as a whole, is–on average–comfortably lower than the so-called “sustainable rate.” But the more precise look provided by the Iowa State data shows that these statewide or regional estimates mask the serious damage that larger storms cause.

By tracking erosion after every storm over a period of years, the researchers showed that some Iowa farms are losing precious topsoil up to 12 times faster than the government estimates. When storms hit vulnerable or poorly protected soil, fields sometimes lose more soil in a single day than is considered sustainable for the whole year, or even decades.

And we can’t just blame the weather. Farmers are planting fencerow-to-fencerow in response to high crop prices that are likely here to stay. Misguided mandates for increased corn ethanol production add fuel to the fire, and flawed government farm and insurance subsidies clear the way for all-out production–with little regard for what happens to the soil, water and wildlife habitat.

Losing Ground is bad news for many reasons–the foremost being that we are sacrificing the nation’s future ability to grow food in the name of protecting today’s profits for Agribiz. Worse, federal erosion measurements are misinterpreted by industrial agriculture and its lobbyists to provide political cover to continue doing subsidized business as usual while our soil and water pay the price.

The American Farm Bureau Federation, one of the largest and most powerful groups that lobby on behalf of agribusiness, pounced on the USDA’s estimates the moment they were released in 2010:

The 2010 National Resources Inventory (NRI) recently released by the Agriculture Department’s Natural Resources Conservation Service shows that farmers and ranchers are careful and caring stewards of our nation’s natural resources. The massive report, coupled with the latest USDA productivity figures, confirms the shrinking environmental footprint of our efforts to produce food and fiber in the United States. This is good news that should not go unreported.

The National Corn Growers Association was quick to join the chorus, happy to use the data to bolster a million-dollar PR campaign.

The latest data basically gives farmer documentation for what we already knew… growers are doing more with less; less land, less water, less crop inputs from pesticides to fertilizer, and all the while getting gonzo increases in productivity of crops like corn.

This was the very reason corn growers created the Corn Farmers Coalition (CFC) last year; to bridge the large gap between what consumers don’t know or think they know and the reality of modern, innovative farming. In the case of CFC the idea was to start small by educating decision leaders in Washington, DC because of the enormous impact Congress and other federal agencies can have on farmers either legislatively or through regulation.

Now NRCS gives us a well-deserved “A” on our environmental report card. This is a story worth telling, especially given the misleading information being spewed by some agenda driven groups. So, look for opportunities to speak up for your farm; Do it locally, tell your story online through social media, tell your elected officials. We all have a vested interest in getting this right.

The Farm Bureau and the corn growers would like members of Congress and their constituents to believe that everything is fine with the soil and water in the Midwest, with good reason: Awareness that agribusiness practices are wreaking environmental havoc would erode taxpayer willingness to continue subsidizing these practices and would invite calls for regulation of an industry that largely escapes government oversight.

For instance, non-point source pollution–nitrates and phosphates from fertilizers slathered on farm fields to squeeze out every possible bushel–is subject to no regulation at all under the Clean Water Act. Excessive pesticide spraying over water sources is enforced by nothing more than a label on the pesticide container, and water utilities must bear most of the work and expense of removing toxic farm chemicals and other pollutants from tap water.

Still, there is good news in Losing Ground. The report reminds us that common sense and traditional conservation practices work. As much as 97 percent of soil loss is preventable by simple measures like planting strips of grass or trees on the edges of crop fields and along streams and the contours of hills. These practices also help limit the damage from chemicals that run off fields and into water sources. Our aerial survey revealed that some, but not nearly enough, farmers are using these and other practices to protect our soil and water. These conservation-mined farmers are living proof that profitable farming doesn’t have to come at the expense of our natural resources.

Unfortunately, however, most of the federal conservation programs that help farmers implement these practices are slated to lose funding–what looks like a $356 million cut from last year–in the current frenzy of budget cutting. And this isn’t their first visit to the chopping block. State programs aren’t faring any better.

Moreover, these programs have never been robust enough to compete with the pressure that subsidies and incentives put on America’s soil and water. Between 1997 and 2009, the government paid Corn Belt farmers $51.2 billion in subsidies to spur production, but just $7 billion to implement conservation practices. The $18.9 billion spent to subsidize the corn ethanol industry rubs salt in the wound.

Farmers love these conservation programs but are being turned away in droves for lack of funds. Commodity groups and Agribiz lobbyists are already circling the wagons to fight any cuts in traditional subsidies. They would be wise to not let the public’s benefit from agriculture program spending–improved water and soil quality from conservation programs–evaporate or any rationale for public support for commodity subsidies and propping up crop insurance will disappear along with it.

What’s needed is full and aggressive enforcement of provisions in the 1985 farm bill that require farmers who accept subsidies to use soil conservation measures on the most vulnerable cropland. But the reality, according to official reports and anecdotal evidence, is that “conservation compliance” enforcement has waned, putting at risk the real soil conservation gains that were made between 1985 and 1995.

Farmers need a safety net, but so do our soil and water.