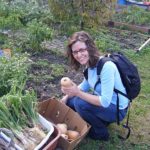 Siena Chrisman is the Manager of Strategic Partnerships & Alliances at WhyHunger in New York City. She joined WhyHunger in 2005; in her current capacity, she works with organizations and advocates around the country to build the movement for a healthier and more just food system. She is the editor of Green Roofs: Ecological Design and Construction (Schiffer Publishing, 2004), and holds a BA from Mount Holyoke College. Originally from Amherst, MA, Siena lived in Italy prior to moving to New York, teaching English, doing odd jobs, and learning what a culture looks like when it values food. She now lives in Brooklyn, where she cooks, bakes, composts, and is anxiously awaiting warmer temperatures so she can start planting in her community garden plot.

In my work at WhyHunger, I’m fortunate to focus at both macro and micro levels, working with national level organizations and local grassroots groups around the country. We’re able to see the connections—how federal policy impacts local communities, for example; or the commonalities between groups from, say, Iowa and New York City, who may seem very different on the surface. A primary focus of my work is making these connections—helping to organize the grassroots for national policy advocacy, or bringing groups together to learn from each other.

I am most inspired by the grassroots community leaders we work with. There are such incredible people all around the country, and right here in New York—I have friends and colleagues working in Bed-Stuy, Brooklyn, or the South Bronx (which has one of the highest diabetes rates in the country) who are making changes in their communities every day—often on top of another job. They eke out the time and energy to organize, advocate, grow their own food, and inspire their neighbors at a very basic level of personal engagement. Despite the enormous changes they’re making, most of them are still so under the radar, and I’d say most people don’t realize that this is where a lot of the good food revolution is coming from.

Much of my work is done in service to and in recognition of these leaders. My work is about amplifying their voices and stories so more people can be inspired and learn from them.

On days when I’m ready to just give up because the problems are so huge, I think about them—and I also think about the joy of sharing amazing food with people I love. At the risk of sounding cheesy or trite, I’m inspired by the idea of a better, healthier food system for everybody and, despite all obstacles, truly committed to working towards a world where that joy is a basic right for all people.

My overall vision—which dovetails with WhyHunger’s – is a just, healthy, sustainable food system that nourishes all people. More specifically, I see it as a localized system, with a diversified network of producers producing for regional markets before export, supplemented by fair national and international trading systems. This would build local economies, create jobs, and develop resilient, self-reliant communities.

I recently finished Don’t Think of An Elephant by George Lakoff. Such great stuff about framing and messaging—and how, basically, conservatives are winning because they’ve learned how to frame the debate. The food movement has a lot we could learn from Lakoff.

I’m completely in love with Mark Bittman in his new Opinion column and blog at the Times. I love “How to Cook Everything Vegetarian” and years of Minimalist columns too, and I think the crossover he’s made is so brilliant—we trust our cookbook authors; they become characters cooking with us in our kitchens. Bittman is using the trust he’s built up to guide his broad audience gently into some right-on, pretty sophisticated, progressive food politics. I think his voice is exactly the one the food movement needs right now. Plus: the New York Times has a food writer on its op-ed page! What a thrill!

I read The New Yorker – I’d like it to do more about food, but I’m frequently flagging relevant articles. There was recently a profile of a Peace Corps volunteer and his advocacy in Congress for increased Peace Corps funding, which made me think a lot about alternative strategies for congressional advocacy. Back in the food realm, Obama Food-a-Rama and Civil Eats are great. And I’d be completely lost without the Comfood listserv.

There’s often a pretty fine line dividing personal and professional for me. I work nationally, with colleagues all over the country—many of whom are also friends; so that’s one community.

And I live in Brooklyn, which, as you may have heard, is doing a lot with food—I feel like it’s gotten to a point with local food that the borough has kind of jumped the shark, so to speak. The next big trend might be super-processed, eating-on-the-go—as a backlash against the huge local/sustainable thing! On a personal level, I love that, and it’s an amazing place to live. I have a great food community there—I’m part of a community garden and a CSA, I have a network of friends who are farmers. A big part of what makes Brooklyn such an exciting place to live is the really diverse, community-based food work—I’d like to see more of the diversity of it get more publicity, rather than the current media focus that too often seems to be exclusively on young white hipsters growing crops on rooftops.

I’m committed to working at the nexus of grassroots and national to accurately support and represent voices of people who cannot be in the room or aren’t in the conversation—as well as working to get them to the table themselves. I’m committed to social justice, antiracism, grassroots-up leadership, and to equitably-produced and delicious food.

Broadly speaking, a healthier and more just food system for everyone. The goal of my work is to foster alliances and networks towards building the broad food movement. The Food and Farm Bill will be one catalyst towards this end, and I see it more as such than as a place where we’ll get any real change, at least in this next round. Ultimately, I’m working towards a time when the food movement recognizes itself as an actual movement, when it’s something that the broader public sees themselves as a part of—and when we have actual political power.

Change looks like a different national conversation; a fundamental shift in how we live our lives and see the world. Because change is so large and happens at so many different levels, up to national and international policy, incremental change must happen at all those levels to reach a tipping point.

I think symbols are important to indicate our progress—so, with regards to food, the White House garden is a real symbol of change, indicating from the highest levels of government that food is something to have a national conversation about. Of course, that one is a complicated symbol, given the split personality of the Obama Administration on food—I guess I could equally argue that the ruling allowing GE alfalfa to be planted without restriction is a symbol of their real priorities. But I think the garden is important. Or maybe Bittman on the Times op-ed page is a better example, or the way food companies have embraced the “sustainability” buzzword—they’re all indications of how much our ideas about a healthier, more truly sustainable food system have permeated the culture. All of that has changed so much just in the six years or so that I’ve been doing this work—the magnitude of change in cultural awareness about food just in the last few years is kind of mind-boggling to me.

We need to be doing more concerted grassroots organizing. Crafting a strategy, building relationships, building momentum, reaching beyond the choir. We can learn a lot from the Civil Rights movement and the Obama campaign. The practicalities of organizing include sometimes difficult conversations across difference, taking real time to cultivate relationships and learn from each other, setting common goals. It’s hard work, but so rewarding, and we need to be putting more energy there.

Probably as part of that, we also need to develop a much more unified basic message, so that we can tell our own story and not always simply reacting to McDonald’s or Big Ag’s version of the story.

In collaboration with Growing Power, we’re beginning the pilot year of the Community Learning Project for Food Justice, which is linking pairs and groups of organizations to learn practical skills and strategies from each other. We’re so excited about helping grassroots organizations build capacity through relationships with each other, and will be sharing the stories of the partnerships as they develop.

We’ve also been part of the development of Live Real, a new initiative uniting youth and communities across the country. One of the first projects is a Fellowship for 18-29 year-olds; the application announcement will come out next week, and Live Real’s really innovative website will debut in May.

WhyHunger is also a founding member of the US Food Sovereignty Alliance. It’s the first national US group to use the term “food sovereignty,” which builds on food justice and takes it a step further.

Our Harry Chapin Self Reliance Award winners this year—as always—are really stellar, including groups like Healthy Solutions in Washington, DC, Community to Community Development in Washington state, and the Detroit Black Food Security Network. And then people ranging from Anim Steel, of The Food Project, to Mark Bittman (again!), to my (NY) Senator, Kirsten Gillibrand.

At the local/state level, yes—I can see real policy change happening there, as it already is. Nationally, with the economy, the budget cuts, and the conservative trends these days, it’s hard to see how we’ll be able to make much significant change in the next Food & Farm Bill, say. For that reason, I think it’s really important to keep up efforts at the local and state level, to create good models and build momentum so that national change is a greater possibility down the road.

Focus more on our commonalities and what unites us. Tell our own stories. Talk to each other, across lines of difference and across sectors. Build our own message. Give money to candidates and hire lobbyists. Ultimately, we need to be a political bloc, and food needs to be recognized as a political issue.

Something involving spring produce—ramps, asparagus, peas, strawberries; homemade pasta; and, assuming realistic logistics are no object, eggplant cooked in the way they do it in southern Italy. Dessert would be this cake with chocolate mousse and espresso-soaked poundcake that my Mom used to make.