Bees Are Here to Stay at the Fairmont | Civil Eats

Bees Are Here to Stay at the Fairmont 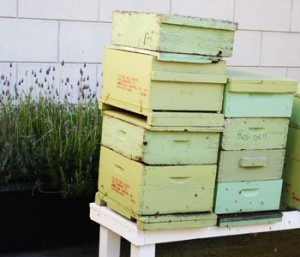 There are two gardens on the roof at the Fairmont Hotel in San Francisco. One has a picturesque green lawn, a fountain, and an array of decorative trees and flowers. In other words, it’s exactly what you’d expect from a Nob Hill hotel. Nearby, on a smaller terrace, is something less expected: a culinary herb garden. Raised beds brim with lavender and rosemary, a small compost bin is visible in one corner, and, off to one side, honey bees busily travel to and from three large hives.

The bee hives belong to Marshall’s Farm Natural Honey, but it was the Fairmont’s executive chef jW Foster (capitalization intentional) who had the idea to put them there. Shortly after relocating from the Fairmont in Dallas, Texas, where he had started a kitchen garden complete with bee hives, Foster voiced the idea of doing something here in San Francisco. “I had gone to the farmers market in Dallas and met a local beekeeper. After talking with him on a few different visits, we decided to put some bees at the hotel.”

The idea was embraced at the SF Fairmont too, and Foster was put into contact with Helene Marshall from Marshall’s Farm. Helen, who grew up in San Francisco and has a long-standing relationship with the landmark hotel, jumped at the chance. “I used to wear my prom dress to the Fairmont,” she says. “I’ve been going there for weddings and bar mitzvahs for years. The Fairmont and I go way back!”

The garden where the hives were placed last June is located above the Tonga Room, on a sunken rooftop that gets morning sunlight and allows for a good flight pattern. “If it had been any higher, there would have been too much wind,” says Helene. At first, she and her husband Spencer, who does the majority of the beekeeping, were a little worried about the bees having enough to forage in the two-mile radius around the hotel. “Spencer was skeptical, but when he goes to visit the bees they’re always active and healthy looking,” she says.

The Marshalls have several other hives in the city, but none in such a visible location. And while an urban environment does pose some risks of contamination, Helene says they’re no more significant than the risks in rural places. “Urban bees often do better than bees in agricultural areas, because of the pesticides.” Plus, she adds, “People water their gardens here. Out in the Valley everything dries up in the summer, so there aren’t as many year round flowers.”

Foster sees the bees as part of a larger effort to engage his staff and guests in the world of sustainable food. He says that more than half of the food prepared in the hotel’s kitchens comes from local farms (Allstar Organics, for instance, drops off a box of produce every three days), and Foster’s staff breaks down a portion of their own meat from whole and half animals raised on local ranches. 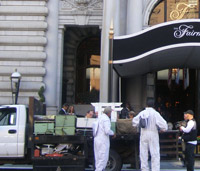 The chef has read widely about colony collapse disorder and says he hopes that hosting bees on the Fairmont’s roof will bring some awareness of the importance of preserving their health. “[As pollinators], they really are crucial to so much of what we eat,” he says. The hotel has included information about the bees on their menus and website, and Foster has high hopes for expanding the garden. “When we put in a greenhouse, I’d even like to try growing tomatoes,” he says.

The hives have only produced around 120 pounds of honey so far—not enough to stock the hotel’s kitchen, but Foster does use it here and there in his recipes. “It’s in some of our ice cream, pastries, vinaigrettes, and wherever else I can find a place for it,” he says.

Foster and Helene will also be teaching two honey-based cooking classes this month in San Francisco with CUESA, at the Macy’s Cellar and in the hotel’s herb garden. Helene is intrigued by the idea of seeing more local people visit the Fairmont. “It’s traditionally a very upscale place, so this could bring it down to the here and now,” she says.  Perhaps most importantly, the hives at the Fairmont are a sign, says Helene, that “people are starting to accept bees in urban situations.” Recalling a letter she received from the lawyer of an angry SF resident living near a Marshall’s Farm hive, she says, “This just wouldn’t have happened 10 years ago.”