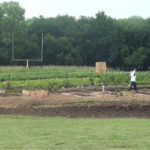 Highland Hills is one of those down-and-out communities that’s allowed a glimpse of prosperity but never gets to taste it. The Dallas skyline looms large across the hazy north Texas horizon and is linked to this poverty-plagued neighborhood by a seven-mile ribbon of light-rail steel. Ledbetter Avenue crosses the train line passing vacant buildings, empty parking lots, and a dizzying array of “For Sale” and “For Jesus” signs. Named for the renowned guitar picker Lead Belly who did time in these parts–both in and out of prison–the Avenue speaks little in the way of promise, but wails the blues of poverty loud and clear.

Like cockroaches in a post-nuclear winter, the only commercial survivors appear to be pawn shops, Dollar stores, and fast-food joints. One supermarket, a Minyard whose cinder-blocked and windowless façade is about as inviting as the entrance to Stalag 13, is the only retail food source in the surrounding miles of food desert. But a lifeline from an unlikely source has arrived via a group of innovative academics. Paul Quinn College, a historically black college that sits at the neighborhood’s eastern edge is committed to lifting the Highland Hills’ physical and economic health with a combination of food, farming, and servant leadership.

To drive by the campus is to, well, keep on driving. There are no signature ivy-clad buildings or tree-shaded quads, in fact the first roadside buildings you see are in various states of demolition. Student enrollment plunged from 600 to 200 and the school has experienced on-going accreditation problems. At first glance anyway, and like the adjoining neighborhood it wants to help, Paul Quinn appears to be hanging on by no more than a pea tendril.

But first glances are deceiving, and pea tendrils are stronger than they look. And when your back’s to the wall and nobody, even your own government, will help you, you fight like hell, you do the unexpected. You take risks.

In this case not only did the college take risks, it committed a grievous sin, at least by Texas standards–they terminated their football program and turned their field into an organic farm. Yes, in the shadow of the Super Bowl, with the specter of Tom Landry looking down, and the holy glare of Friday night lights forever dimmed, they ripped up sacred turf and planted–goalpost to goalpost–peas, lettuce, carrots, strawberries, and more, lots more.

While the roar from the stands may have subsided, the field has not fallen silent. When farm manager Andrea Bithell announced to student and staff volunteers that the kohlrabi had gone in last week, everyone cheered. Showing a group of farm visitors where the corn would be planted later this spring evoked a round of applause from students who proclaimed their love of its sweet kernels. The competitive spirit and enthusiasm so much a part of college athletics is hardly lacking at “Food for Good Farm,” the name chosen to denote it’s larger mission of education, community service, and healthy food for all. Sounding more like a coach than a farmer, Bithell uses words like hustle to describe her student crew’s effort to plant and seed the two-acre field. When the volunteers complained about working in the cold and the rain, she reminded them that football games are played in all kinds of weather. Even the plants are forced to compete in a set of 12 trial beds located in the south end zone. Here students test different growing methods and evaluate their potential financial rate of return.

Elizabeth Wattley, Director of Service Learning, said with pride that the farm’s tomatoes were better than anything she’d ever bought in a grocery store. Biology major Symphonie Dawson giggled when she described the farm’s mascot that they temporarily borrowed from Delta State University. “It’s the ‘Fighting Okra,’ an image of the vegetable wearing boxing gloves. We borrowed it because last year’s okra crop seemed to go on forever.” The “Rah-rah, Go Team, Go!” energy previously reserved for football games is now channeled into the planting of 1500 strawberry plants, 6600 onions, a new asparagus bed, and dozens of vegetable varieties. “The farm is the light of the college,” said Wattley.

Once on the ropes, Paul Quinn has gained a reprieve by discovering the multiple benefits of farming while also turning attention outward to the community. One major need the farm addresses is healthy living and eating, no small concern on today’s college campuses, especially one surrounded by a food desert. “Before their work on the farm, students wouldn’t eat carrots unless they were smothered in ranch dressing,” said Bithell. But by getting their hands in the dirt–a task that usually took two or three visits to get past the “yuck” declaration–students started eating carrots right out of the ground, dirt and all. “They actually taste,” said Wattley, pausing for a moment to find the right adjective, “carrot-tee.”

By engaging students in the school’s biology and social entrepreneurship courses, the farm gives young people a chance to get hands-on laboratory experience while getting their hands in the dirt. Even the students who don’t care to venture into the world of bugs and compost get a taste of the farm’s output. The cafeteria now offers a monthly dish to showcase the farm’s harvest and introduce students to food that is healthy, tasty, and very local. Jasmine Wynn, a freshman legal studies major, summed up the farm’s health benefits best. “I’m a city girl from Dallas, and for me the farm was something new. I liked being out there. I also started getting serious about my diet and decided that organic food is better for you. It’s just part of a healthier lifestyle, and I want to stick around for a long time.”

The lack of farming experience or a farm background has not been a deterrent to anyone’s participation, including school President Michael J. Sorrell. With public policy and law degrees from Duke University, his stellar resume shows he has represented American Airlines and Morgan Stanley, served on numerous commissions including an assignment at the White House, and was selected in 2009 as one of the 10 Best Historically Black College and University presidents. However, lacking from Dr. Sorrell’s career synopsis, which also includes representing top-flight athletes like Utah Jazz’s Deron Williams, are any agricultural credentials. So why did he eliminate the football program and have the audacity to make the field into a farm?

A big part of the answer lies in his commitment to servant leadership, which, like the farm, is a concept he brought to Paul Quinn. With such simple but difficult to live by ideas like putting others before self, leaving the world a better place than you found it, and maintaining spiritual faithfulness, Dr. Sorrell not only preaches what he practices (he teaches a freshman course in servant leadership), he practices what he preaches. The farm is the center of that practice.

Isaiah 58: 9-12 gets prominent mention on the College’s website which also touts the school’s Christian underpinnings. The scripture admonishes us “to pour yourself out for the hungry…then shall your light rise in the darkness…and you shall be like a watered garden.” The Food for Good Farm is set on serving the hardscrabble community that surrounds it and though a share of the harvest goes to the cafeteria, 10 percent is donated to a local food pantry, a sizeable share is sold on a weekly basis to the community from the field’s former hot dog stand, and just to preserve some historical symmetry, the Dallas Cowboys buy a small share of the farm’s organic veggies.

The “adaptive re-use” of the field has been impressive under Bithell and Wattley’s leadership. The hash stripes are gone as well as the top four inches of sod and dirt that they replaced by dump truck loads of pure organic matter. Reflecting the program’s absolute commitment to organic farming, there was simply too much distrust of the chemical residues from years of a perfectly green gridiron. The goalposts remain as do the blocking sled, scoreboard and the bleachers running the length of both sides of the field. The former press box will be turned into a chicken coop and Wattley retains some hope that the bleachers can be repurposed as a greenhouse. Acres of adjoining land are being eyed for farm expansion, especially if a federal grant comes through.

None of this extraordinary progress has come cheaply. The school has made significant capital expenditures to accomplish this conversion and the on-going operating costs, which are only marginally offset by farm sales. An April fundraiser featuring Will Allen hopes to swell the coffers to enable the farm to buy its own tractor.

The rapid development of the farm, and the rising fortunes of Paul Quinn College have come with a price, however. The Food for Good Farm is the result of a 50/50 partnership with PepsiCo’s Food for Good Initiative. The college makes it clear that this is an equal partnership and that PepsiCo has not placed any strings on their giving. Other than cleaning up its tarnished image, one cannot detect any sinister covert or overt motives in the cola giant’s support. Yet the contradictions can’t be ignored. After all, Pepsi and other soda makers have contributed more than their fair share of calories to America’s obesity crisis.

In the meantime, it’s hard to argue with the outcome of the partnership. Texas has one less football field and one more organic farm, clearly a net gain for humanity.