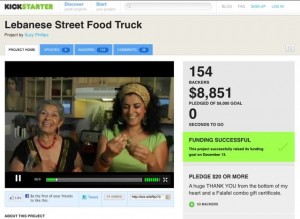 “Crowdfunding? What’s that?” As many farmers and founders of food-based businesses have discovered, crowdfunding is a tool that can enable people to raise gift money from friends and complete strangers, in increments of anywhere from one dollar to thousands, for projects that might never have gotten off the ground otherwise. Wondering if it might work for you? I recently asked Yancey Strickler, co-founder of Kickstarter, one of the most popular online crowdfunding platforms, to share his insights into what makes a Kickstarter Food project successful.

At its most basic level, here’s how Kickstarter works: a project creator posts a campaign video and a description of the project to the Web site (assuming it meets the guidelines), along with a system of rewards offered to entice people to support or “back” the project with gift money. The campaign begins! The project creator has a limited time to raise pledges to meet or exceed a fundraising goal; backers can pledge any amount over $1 using a major credit card. In real time, Kickstarter shows how much money has been pledged to each project, and by how many backers.

If–and only if–the project reaches its goal by the end of the fundraising period, backers’ credit cards are charged the amount of their pledge, and Kickstarter releases the money to the project creator, minus a five percent cut, and another three to five percent cut to Amazon Payments, which handles the actual transaction. The project begins, and eventually the rewards, which are often related to the project itself, are distributed.

Turns out this model works remarkably well. Consider a few numbers: backers currently pledge over $1 million dollars every week to projects on the Kickstarter platform, and seven staff are responsible for receiving the 250-300 project proposals that come in every day. They ultimately give a green flag to 55 percent of these projects; 45 percent of which go on to meet their fundraising goal and collect the money pledged by their backers. The average successful project raises 125 percent of its fundraising goal, though a few in Kickstarter’s Hall of Fame have raised six-figure amounts.

What kind of projects are we talking about? Charity projects, “causes,” and businesses seeking general funding violate the site’s guidelines, but non-profits and businesses pitching a specific project are fair game; indeed, many projects listed on Kickstarter reveal a social conscience and are designed to make money.

“We get really excited about an individual pursuing something of passion for them, where they’re clearly on a quest to create, and share their work with a larger audience. We see that in film and art.” They also see many of these qualities from farmers and chefs, hence the Food category. “From the very beginning we wanted food to be part of Kickstarter. These are artists, these are creative people!”

Many of the projects in the Food category are entrepreneurial in nature, despite the guideline against using Kickstarter to raise business startup funds. “This is a gray area for us,” Strickler admits. “We allow more in Food because we like the category a lot, and people respond well to it. We’d rather be open and take it case by case and do our best. If you feel we’re in error, we’re happy to talk about it.”

Food trucks are a popular proposal. Though they are favored by the staff over restaurant proposals, Kickstarter is really looking for innovators who convincingly pitch on original idea or solo adventure—someone that says “I’m a person, here’s what Im doing.”

To date, backers have pledged more than $1 million to projects in Kickstarter’s Food category and more than 15 Food projects have met or exceeded their fund raising goals. Most of these projects were successfully funded, including Suzy Phillips’ Lebanese Street Food truck in Asheville, NC and a project teaching cooking classes in Los Angeles schools. The most successful Food project to date was Britta Riley’s Windowfarms Project, which raised $28,205 at the end of 2009.

If you want to launch your own campaign, here are Yancey Strickler’s tips for a successful Kickstarter project:

“Kickstarter is a separate economy,” Strickler explains, “one that people are choosing to participate in because it’s more meaningful for them. People watch the videos and say ‘Hey I like that person, he or she is kind of cute.’ For backers, it’s about more than just the idea; it’s about wanting to live in a universe where a person like this can succeed.”

Elizabeth Ü is executive director of Finance for Food, a nonprofit that educates food-system entrepreneurs in the United States about the full range of financing options available to support them. Her book Raising Dough: the Complete Guide to Financing a Socially Responsible Food Business, will be released by Chelsea Green in June 2013 and is currently available for pre-order. Elizabeth previously served as manager of strategic development at RSF Social Finance, helping launch a loan fund to support high-impact, sustainable food ventures. She has served on staff at the Business Alliance for Local Living Economies (BALLE), and spent two years as program officer of Slow Money, then a project of Investors’ Circle. Elizabeth regularly speaks, designs and delivers workshops on the topics of impact investing, social finance, and sustainable food systems at conferences geared toward foundations, financiers, investors, philanthropists, nonprofits, and social entrepreneurs. Read more >