The EPA: Cleaning Up Crappy Water Since 1970 | Civil Eats

The EPA: Cleaning Up Crappy Water Since 1970 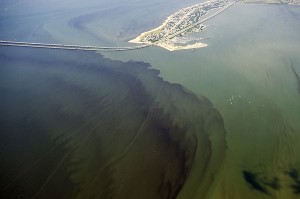 This is a story about crap–literally, tons of it. Piling up in Confined Animal Feeding Operations (CAFOs) and being sprayed onto farm fields, animal manure is polluting the nation’s waterways and is nearly impossible to regulate.

Last week, the Fifth Circuit Court of Appeals handed down a ruling [PDF] reversing the decision by the Environmental Protection Agency (EPA) requiring CAFOs to obtain a Clean Water Act permit in order to pollute. The court did uphold the EPA’s right to fine those that do pollute after the fact. Here’s the rub: Farmers are not responsible for manure that exits their property and enters waterways when it rains.

This is one of the many lawsuits against the EPA–issued by both environmental groups and pro-agribusiness organizations like the American Farm Bureau Federation, National Pork Producers Council, and United Egg Producers. For a small agency, with a $10 billion annual budget, it seems a lawsuit is the only way to force the EPA to take action. Hamstringing the EPA, which is high on the national Republican agenda [PDF], is both part of the grand plan of maintaining business as usual for agribusiness interests and a coordinated effort to step up the culture wars ahead of the 2012 election.

The EPA has been taking heat from agribusiness interests for decades, but that heat has been ratcheted up since Republicans took the House this year. Congress has called in EPA head Lisa Jackson to question her so many times, they’ve joked about giving her a parking space. She’s been asked, for example, about her plans to regulate greenhouse gases after a court mandate required it and about a plan to clean up the Chesapeake Bay–the largest estuary in the U.S.–which is surrounded by industrial farms. In fact, the questioning has at times even become absurd, with GOP committee leaders stoking fears of regulating “cow flatulence, farm dust or milk spilled on dairy farms.”

Critics claim that the EPA stepping in to regulate greenhouse gases or farm run-off would eliminate jobs. There is, in fact, no proof or precedence from other environment-protecting regulations to demonstrate this and Jackson eloquently argued that regulation instead spurs creativity and creates jobs in an Op-Ed in the Wall Street Journal last December, on the 40th anniversary of the agency’s founding.

The history of that founding is instructive: In 1970, appalled by the deteriorating quality of the air and water, 20 million people took to the streets (the largest American protest ever) on Earth Day and demanded that the Nixon Administration do something. This was just months after the Cuyahoga River in Ohio had caught fire because of flammable pollution.  The EPA was created and laws were written to support it: the Clear Air Act and the Clean Water Act, which gave the agency the ability to clean up where industrialization had made a big mess.

Along with banning the pesticide DDT, which has been linked to cancer and persists in the environment today, and taking on the biggest polluters, one of the early jobs of the EPA was to stop the practice of allowing human waste to be dumped in our waterways. It turns out that this was causing excessive algae growth, killing fish and other creatures, and was rendering these waters unswimmable. Since modern sewage treatment plants became de rigueur in the U.S., the problem has developed anew: Virtual animal cities producing tons of manure without any really sane method (ponds lined with plastic, anyone?) for keeping it out of our waterways have sprung up in greater numbers, with similar results. A tide of Republican deregulation along with a lack of interest or understanding by the public of the issues has allowed the problem to progress.

Every year nearly 10 billion animals are being raised and slaughtered for food in the U.S., and industry wants the public to believe that their waste is being used as a resource. But the fact of the matter is that there is just too much of it and it is filled with chemicals and antibiotics–chickens are often given feed that contains arsenic, for example. Those antibiotics might even be increasing the amount of nitrates in our drinking water. Manure was once a part of a functioning farm, but now it has become ersatz–stinking up rural areas, causing fly epidemics, and being linked to illnesses.

The Chesapeake Bay could set a precedent for cleaning up America’s waterways after years of run-off has spawned inter-sex frogs there and has created a “dead zone”–an area lacking oxygen where fish go belly up–which covers 40 percent of the Bay and is destroying the local fishing industry. The Chesapeake Bay isn’t alone: In the Gulf of Mexico, where nitrates and other run-off from Midwestern farm fields empties out of the Mississippi, there is a dead zone the size of Connecticut.

The EPA set out to clean up the Chesapeake Bay by putting it on a ‘diet’–regulating how much run-off from farms can enter the Bay. This set off a fire storm from agribusiness interests–the poultry industry in particular operates many facilities near the Bay, the House has attempted to defund the project and the Farm Bureau filed a lawsuit to take on the proposed Total Maximum Daily Load (TMDL) limits. These critics argue that voluntary measures are working just fine.

Unlike USDA, which is caught between promoting and regulating food and FDA, which deals with food, drug and product safety on an ever threatened budget, EPA has always understood its role as having to play the bad guy: Getting us to change things because it’s the right thing to do and because it improves our lives in the long term. It remains to be seen whether or not the public will rally in support of the EPA this time around. In light of the fact that a Democratic House and Senate couldn’t pass a climate bill–even with concessions to Republicans–and our president has not prioritized the environment like many might have wished, the EPA may be our only hope for making real changes that impact the way we produce our food.

Photo: aerial of a dead zone

For further insight on the pollution in America’s waterways, I highly recommend the Frontline documentary Poisoned Waters, which can be watched for free in its entirety here.