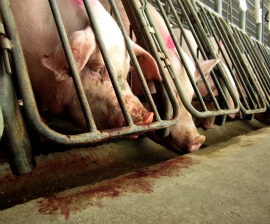 What do Florida and Iowa have in common when it comes to animal agriculture? They’ve both been hot spots, past and present, for the movement to combat some of the worst abuses in industrial agribusiness. And now the factory farming industry is fighting back in both states—and their latest methods represent their biggest overreach yet.

In Florida, The HSUS and other groups pushed for the adoption of the first statewide law in the country to restrict the extreme confinement of animals on factory farms. In 2002, voters there passed Amendment 10, to phase out the caging of breeding sows in gestation crates. In Iowa, HSUS and other animal welfare groups have conducted a series of undercover investigations (see the video below) to expose cruelty in the nation’s biggest factory farming state.

Now, these two states have something else in common. They are trying to make it a crime to photograph or videotape farm animals. They don’t want to criminalize animal cruelty, but they do want to make criminals of people trying to document abuse and to put an end to the cruelty. Lawmakers have introduced bills in both states to establish criminal penalties for going undercover at agricultural facilities and simply taking pictures.

Mind you, if this legislation is enacted, it won’t just be a setback for animal welfare. Shabby, squalid, overcrowded conditions for animals on factory farms are also a food-safety threat for Americans, with millions of Americans sickened every year by contaminated food. It was, of course, an Iowa egg factory farm that was forced to recall half a billion eggs last year because of a Salmonella outbreak, creating one of the biggest food product recalls in American history.

With a potentially dramatic pare-back of funding for federal inspections of animal-agriculture operations looming, at production and slaughter facilities, these new proposed policies to bar the exposure of unhealthy and unsafe practices could not come at a more inopportune time. The industry has long argued for self-regulation, and with government inspection programs stretched so thin, they now want no meddling animal advocacy groups looking either.

Our exposés aren’t just important for raising public awareness about the mistreatment of animals. HSUS investigations have led to the largest meat recall in U.S. history, misdemeanor and felony cruelty convictions, closure of rogue slaughter plants, and disciplinary actions for government inspectors not doing their jobs. None of these important services we fulfill would be possible if such far-reaching and stifling laws are enacted.

It’s precisely because of what past factory farm investigations have uncovered—cruelty at egg farms, pig farms, and other settings—that such exposés are critical to the movement for animal welfare and food safety. With some members of the agriculture industry, including Dr. Temple Grandin, calling for more transparency at animal-raising facilities, these bills run in the opposite direction, seeking to criminalize efforts even to take a picture or to produce a video. They want to criminalize whistle-blowers who bring abuses to the attention of regulatory agencies, or even snap a photo on a cell phone.

I can understand why factory farmers don’t want the public seeing images of their business practices. The images of almost featherless hens, so crowded the animals are living on top of each other, or pigs being struck with metal bars by workers coarsened to their duties are deeply disconcerting. The response should not be, as in some country ruled by a dictator or a junta, to have the strongmen grab the cameras and smash them to the ground or melt them in a fire, as the authorities do in order to hide the beating and shooting of pro-democracy advocates. It’s the same principle at work for the strongmen in these state legislatures. Their scheme is a neater way to smash those cameras to the ground and hide what’s going on. Ironically, they want to prevent their very own customers, America’s consuming public, from learning about the production practices that bring food to their tables and plates.

They’d be best advised to follow the original lead of Florida and other states that have adopted modest animal welfare reforms. Ban the extreme confinement of laying hens and pigs in small cages and commit to sound and safe animal husbandry practices. Transparency is a bulwark in a democratic society, and it’s also critical in an era of systemic animal mistreatment and food safety threats.

Photo: Pigs in confinement. The HSUS Taking a photo like this one without permission would be illegal under proposed bills in Iowa and Florida.