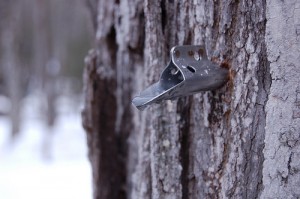 Lately, we’ve been having cold (below freezing) nights and warm (above freezing) days–the exact conditions needed for maple sugaring. The change in temperature is what makes the sap rise and spill out of taps into waiting buckets. I’ve wanted to try maple sugaring ever since I was a little girl marveling at the metal spiles and buckets that decorated the huge maples along our road in upstate New York in early spring. Everything about the process whispered “magic” to me. The small metal taps, the grand old trees, the buckets that appeared mysteriously over night, and most of all, the special “water” that dripped from the stiles and plink, plink, plink-ed into the buckets. This is the stuff Tuck Everlasting is made of.

Now that we’re back on the east coast, it’s finally time come to make this dream come true. I’m happy to report that, unlike so many childhood wonders, the magic of this one has not dimmed with time. If anything, the whole thing seems even MORE magical now that I’ve finally experienced it first-hand. 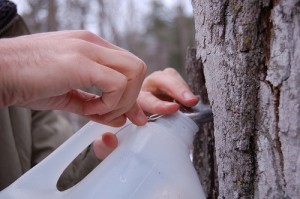 It turns out that sap has a rather short shelf-life, which surprised me. So it’s important to gather it often and not leave it sitting around for more than a couple of days, particularly if the temperature is above freezing–or it will spoil. Within a day and a half, we had five gallons of maple sap on our hands.

By the way, maple sap is absolutely delicious as is! You can drink it straight out of the tree and it is cold and refreshing with a slight maple flavor and a mild sweetness. Move over nectar, maple sap is the new drink of the gods. Why some new age entrepreneur has not yet cashed in on this new superfood health drink is beyond me. 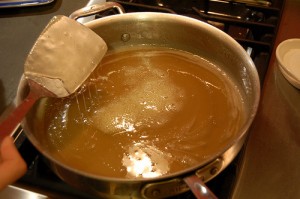 Due to the 40 to 1 ratio that dictates turning maple sap into syrup (that’s right, it takes 40 gallons of sap to make one gallon of syrup – no wonder the stuff is expensive!), we knew that five gallons would not yield much syrup but we decided to give it a go anyway. Woefully unprepared, we ended up boiling the sap down over a number of hours, indoors (which is really not recommended, especially if you have wallpaper anywhere in your house!), in four separate pots. When we were done, the house had been thoroughly humidified and smelled very mapley, indeed. 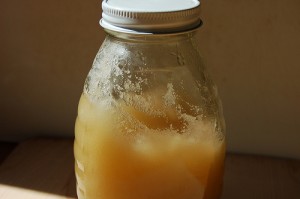 Something went slightly amiss (there’s no candy thermometer at our house and we appear to have misinterpreted what “sheeting” looks like) and we ended up making maple sugar instead of maple syrup.

I really can’t complain about this mistake–the sugar is rich and startling sweet with a lovely mellow maple flavor and surprising hints of vanilla. I’ve been putting a couple lumps in my coffee in the morning and sneaking little spoonfuls here and there when I can no longer resist the urge.

My husband wants to try doing another boil (outside, this time) to see if we can get the timing right to make syrup instead of sugar. I bought a candy thermometer at Woodstock Hardware in preparation and we’re gathering firewood and setting up a firepit. The weather is supposed to be gorgeous. Wish us luck!