By Bruce Cole and Jennifer Maiser 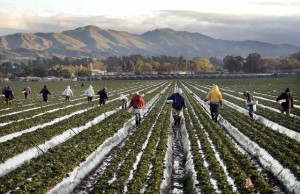 Strawberries are tasty, sweet treats that announce spring and warmer weather. We use them in baking, cocktails, and eat them straight out of hand. As delicious as strawberries are, they are also a huge industry in California–the state is the nation’s leading producer and over 37,000 acres are set aside for strawberry production this year. They are the sixth most valuable fruit crop in California, with an approximate value of $2.1 billion.

Because they are such an enormous part of California’s agricultural economy, strawberries are also a microcosm of many issues facing the industry, especially the proposed use of highly toxic chemicals like methyl iodide and the labor, health, and safety issues that accompany it.

Called “one of the most toxic chemicals on earth,” methyl iodide remains a pesticide that is used in growing strawberries. A carcinogenic toxin, it is harmful to farm workers and the communities surrounding the strawberry fields themselves.  While the U.S. Environmental Protection Agency (EPA) approved methyl iodide for use in 2007, it wasn’t until December 2010 that outgoing Governor Arnold Schwarzenegger controversially approved its use in California over the vehement protest of many scientists, and more than 53,000 public comments.

Join us on Wednesday, April 6, at Viracocha in San Francisco, for the next installment of Kitchen Table Talks. We’ll gather to discuss this important issue and some of the many related and critical issues facing agriculture in California.

Joining us in our panel for the discussion will be:

Sam Mogannam, owner of Bi-Rite, a neighborhood market in the Mission district of San Francisco renowned for the care and consideration invested in its sourcing practices. Sam is uniquely versed in local farmers and their growing methods and will share his insight into why he chooses organic strawberries and what he looks for when buying them.

Dana Perls, Community Organizer for the Central Valley and Bay Area region at Pesticide Watch.  Dana will tell us about the methyl iodide fight and how she believes we should help push Governor Brown to overturn the previous administration’s decision.

Brett Melone, the Executive Director of the Agriculture & Land-Based Training Association (ALBA). The Salinas/ Watsonville area is the largest grower of strawberries in the state, and ALBA is in the middle of the action. ALBA helps to generate opportunities for farm workers, by empowering them through training for their roles as pickers, crop growers, to farmers market vendors and has fostered 40 new farmers through their Farm Incubator Program. Many of those farmers grow strawberries.

Ryan Casey from Blue House Farm, a certified organic farm located on the San Mateo Coast in Pescadero. The farm grows a diversified assortment of fresh produce, fruit, and flowers and is committed to providing delicious, seasonal, local foods to the peninsula region. Ryan will discuss the realities of growing and selling organic strawberries in the San Francisco Bay Area.

Bruce Cole publishes, edits, and washes the dishes for Edible San Francisco. Jennifer Maiser is an advocate for local and sustainable food. She is the editor of the Web site Eat Local Challenge, which was founded in 2005. The site was one of the first online resources to support those looking to eat locally. She is a writer who has had work published in Edible San Francisco, Cooking Light, Fine Cooking, on KQED's Bay Area Bites, and for Williams Sonoma. She writes regularly for Serious Eats. Additionally, Jennifer is an avid photographer who has had fresh food photographs published in many nationwide publications. By day, Jennifer is a data geek who supports organizations with their data needs. Read more >