Spring Cleaning: An Update from the Urban Homestead | Civil Eats

Spring Cleaning: An Update from the Urban Homestead 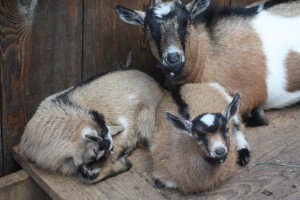 Holy half a year, I can’t believe it’s been so long since I’ve last updated readers of Civil Eats about the urban farm! We last left off in the fall when the goat babies were born. Since then, it has been a whirlwind adventure and as we approach spring, cleaning up the aftermath has been the priority.

The little goaties, Fred and Ginger, were an adorable addition to the farmstead. They delighted us with their playful prancing, silly kid games of who could be king of the hay bale or goat house, and jumping in our laps for some quality snuggling. I dare say goat kids are the most darling and precious creatures in the animal baby world. Too bad infancy does not last forever.

As the kids grew, Fred began to show signs of his manliness early on. This sure made explaining the birds and bees to our seven year old a breeze. The mechanics of sexual reproduction were laid out for everyone to see, which led to an inquisition that would have rivaled a questioning by Tomás de Torquemada: “Mom, what’s that thing sticking out of Fred’s belly? Why is Fred always jumping on top of his sister? So is Fred going to make a baby with his sister?” Oh dear god, let’s hope not! Though awkward, the latter question left a poignant reminder that Fred could not be housed with his female relations for much longer unless we were looking to vie for a spot on Montel Williams.

Though he still seemed like a baby, suckling his mama and crying whenever he was set apart from the herd, Fred was becoming a full on buck. He began to emit a smell that left no doubt his hormones were racing towards adulthood. It was one serious stench that grew more potent with each passing day. He would make ridiculous overtures towards his sister and mother, which included blubbering, pawing at their backs, and urinating on his face. Sweet Jesus, can you imagine if that were how a human male attempted to attract his mates?

Separating Fred was no easy task. He broke through fences, crawled under heavy objects, hurdled six foot high obstacles. Nothing was going to stop him from being with his family. That is until I patched the hole in the fence.

The situation was compounded by the unrelenting rains we’ve been experiencing this winter. Our backyard consists of four terraces that descend in elevation approximately 15 feet over a length of 40 feet from the top yard to the bottom. The animal pen is the furthest from the house at the bottom of the yard and consequently flooded due to all the precipitation. The goats couldn’t hang out in such a mucky mess without risk of health problems so we moved them near the house where they found shelter in the half finished playhouse/greenhouse that the husband has been working on. After two months of stinky Fred, the top yard was almost as much of a foul mess as the bottom.

In January, Fred and Ginger finally went to their new home in Vallejo, and Ethel returned from a two month romantic getaway in Lake County where she rendezvoused with a studly buck named Flapjack (Ethel left shortly after the babies were born to get knocked up). The Itty Bitty farm looked like a shipwreck from all of the animals running amok and all of my attempts to jerry-rig various areas to contain my overly curious caprine friends.

At this point, figuring out how to milk my non-compliant goat was taking up all of my time. I took round upon round of beatings to try and squeeze a few drops from my doe Lucy, until I finally broke down and bought an easy to use hand milker called the Henry Milker. The contraption helped me to salvage my milk instead of having a filthy hoof planted in my bucket every morning, but I still struggled with my goat on the milk stand. 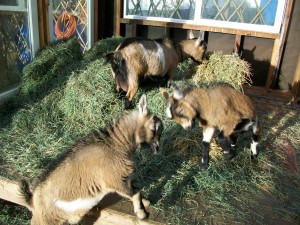 Slowly but surely everything is coming back together. I was able to install a French drain in the animal pen with the help of my fellow urban farming friend Esperanza of Pluck and Feather in Oakland. We’ve shifted from using straw for animal bedding to bark mulch, as straw seems to trap the water creating poor drainage and too much anaerobic activity. My fall garden is finally starting to reach harvest stage and the interns have been helping with the spring plantings.

The container tomatoes held out until December and I was able to harvest my Jimmy Nardello peppers in January. The animals are content, with the exception of a few mite and louse problems due to all the wet weather followed by warm sunny spells. Though it’s been great for the garden, it’s also been a boon to the bugs, which is not so great for the animals.

Ethel is due to kid on Easter Sunday. Step aside Easter bunny; goat babies will be taking your place this year. I’m already swooning for the potential cuteness overload. By the way, if you are interested in some irresistibly cute baby goats, I should have a couple for sale by the beginning June. Shoot me an email if you would like to stake a claim.