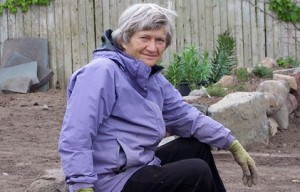 Like many of the women I admire most, Joan Gussow has a bit of an edge to her.  One gets the impression that she doesn’t gladly suffer fools.  But as an avid gardener and longtime professor of nutrition at Columbia University’s Teachers College, she is also a world-class nurturer and a mentor to many, including Michael Pollan, whose quote on the back of Joan’s latest book, Growing, Older, reads:

Once in a while, I think I’ve had an original thought, then I look and read around and realize Joan said it first.

Joan is also a practice in dichotomy–though she bemoans new media for its “misinformation pollution” and is known best for her expertise in that old-timey tradition of subsistence farming (though on an extremely small scale), she is also an unrepentantly radical thinker and the first person I ever heard speak coherently about nanotechnology.

For the uninitiated, Joan Gussow is known as the matriarch of the local food movement.  She and her late husband Alan began growing most of their food in their backyard decades ago. She wrote a memoir about the experience that included recipes but also told the story of our broken food system—never too preciously—in a way that connected it to her life, but also couched it in the context of larger environmental and economic systems.

The first time I met her (in 2008, I think), Joan had agreed to host a group of food activists at her home.  I was thrilled to finally lay eyes on the garden I’d spent so much time picturing while reading her first book, This Organic Life, and I was struck by how close the reality of it was to my mental images—a testament to her descriptive prose. (We made a short video that day, you can view it here.)

One year ago this week, Joan’s garden was devastated by a massive storm and flood.  It wasn’t the first time; the garden, shaped like a bathtub and fenced in on each side, had flooded each year since she and Alan first broke ground on the edge of the Hudson River. The damage was more serious than ever before, but this time, she could rectify the situation. Her neighbor had torn down his house and had yet to build a new one, so for the first time since she’d owned the property, there existed a land-based route to her backyard that wouldn’t involve thousands of wheelbarrows full of dirt, and thus existed the potential to fill in the bathtub-ness, once and for all.
Maybe it’s Joan’s connection to the garden and its inhabitants, which, as she notes in this video, “always seem to hang in there.” Or maybe Joan Gussow is just a tough old bird (or more aptly, a phoenix) who really does have a bit of an edge to her.

After last year’s storm–and anyone who has ever tended a garden could guess this–Joan was devastated. Foodies rallied. To give people a way to show their support, my good friend Kerry Trueman and her husband Matt Rosenberg built this website, where monetary donations were accepted. Soon, Joan had the cash to buy soil and other supplies to rebuild her garden and raise it by several feet. Joan saved what she could of what was in the ground and hired a local man who’d helped with her garden before and had the machinery necessary for what was turning out to be a major undertaking. A skilled group came from the Stone Barns Center and in the style of an old-fashioned barn raising, put everything back.

Last fall, a few friends and I visited Joan and while we were there, she showed us a slide show of the devastation and subsequent rebirth of her beloved garden, and I offered to record her story and create this video.  At the time, the moral of the story I thought we were telling was one about how “many hands make light work.”  In a culture that has grown increasingly isolationist, I found it touching that people actually banded together and accomplished so much so quickly. (As you’ll see in the video, within two months of the storm, the season’s crops were thriving.)

But in the end, what is extraordinary to me about this story is the fact that it happened at all. At Joan’s advanced age, even in spite of her long history and intense devotion to that small plot of land, one might expect her to throw up her hands and call it quits. In fact, this seems like a metaphor for many of the challenges we face today. For those who believe that climate change is real, and for those who believe that we ought to help take care of one another, it’s hard sometimes not to throw in the towel in the face of our current social/political/environmental predicament(s).  But in my few short years of activism I’ve noticed that the best-informed people—even those who endeavor to educate the public about some decidedly devastating facts—are the same people who refuse to give up.

Maybe it’s Joan’s connection to the garden and its inhabitants, which, as she notes in this video, “always seem to hang in there.” Or maybe Joan Gussow is just a tough old bird (or more aptly, a phoenix) who really does have a bit of an edge to her.

Before pronouncing her a tough old bird, I thought I should ask Joan what she thought of all this, so I emailed her yesterday with a link to the (almost) final cut of this video, and reiterated a few of the things I’ve heard her say about carrying on the good fight.  Here’s how she responded:

As for my keeping on keeping on, I do believe that we are in serious trouble—maybe fatal trouble, that is, maybe it’s too late to stop the express train we’ve been riding on—but as I say to my students, suppose it’s too late?  What are we going to do?  Lie around reading novels and eating bon-bons?  I think we should all try to live as responsibly as possible because it’s the right thing to do, and it’s what’s most likely to give our lives purpose.  Working in the garden makes me happy, and after the incredibly heavy rainstorms and flood warnings of the last week, I had no flooding!

As you can imagine, dear reader, having formed, over the last few years, my own attachment to Joan’s garden, I was happy to hear it.

For those who loved This Organic Life as much as I did, Joan’s latest book doesn’t pick up where the former left off so much as it transcends the first, but still answers your most pressing questions—about the more intimate details of Joan’s family life, about (you guessed it) growing older—mostly in the familiar setting of that oft-imagined garden, and carries the reader into new conversations about the nature of relationships, the potential of hope and the meaning of purposeful work. I enthusiastically recommend it.

(Note: All but four of the photos shown in the slideshow were taken by and are property of Susan Freiman. The other four were taken by Georgie Wells, Anthony Geathers, Mary Lukens and Leslie Hatfield. More of Susan’s wonderful photography can be found here.)