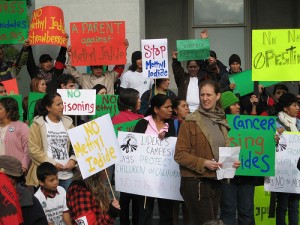 California’s top pesticide regulator is leaving her job to work for Clorox. Mary-Ann Warmerdam, the director of the Department of Pesticide Regulation (DPR), announced her resignation on Tuesday. Warmerdam’s departure was voluntary, but environmental and public health advocates have been pushing for her removal for months. They say she let the chemical industry’s influence trump science and the public’s health when her agency approved the use of methyl iodide—which causes cancer, nerve damage and miscarriage—for use in strawberry cultivation. (See more Civil Eats coverage of the issue here, here and here.)

While environmental health advocates say the move illustrates the coziness of government officials and the industries they are supposed to oversee, it may also be a step toward halting the use of the potent fumigant that UCLA chemist John Froines called, “one of the most toxic chemicals on earth.”

DPR spokeswoman Lea Brooks said Warmerdam’s departure was not related to the pesticide uproar. “Her decision had nothing to do with methyl iodide. It had to do with opportunity,” said Brooks.

Warmerdam’s departure to chemical-giant Clorox was no surprise to Kathryn Gilje, co-director of the Pesticide Action Network of North America. “Unfortunately, we see far too often this revolving door between people from pesticide companies and government regulators,” she said.

Still, the resignation has revived hopes that methyl iodide may not be used in California’s strawberry fields after all, depending on who Governor Jerry Brown appoints to the post. “If there’s someone there who will use science and community engagement and will take the mandate of the department seriously, there’s no doubt in my mind the methyl iodide decision will be reversed,” Gilje said. If the DRP decision stands, the chemical will likely begin to be applied within the next few months.

Despite the objections of the DPR’s own scientists and an all-star scientific review panel [PDF], California approved methyl iodide in December. The DPR green-lighted the fumigant’s use at levels that would expose farm workers and people who live near strawberry fields to levels 100 times greater than what is considered safe. It will be used as an alternative to methyl bromide, an ozone-depleting pesticide which is being phased out internationally in accordance with the Montreal Protocol.

Critics of methyl iodide say state regulators crumbled under the force of lobbying by the chemical’s manufacturer Arysta LifeScience, the largest privately-held chemical company in the world.

In January, a coalition of farmworker and environmental groups filed a lawsuit challenging the chemical’s approval. And more than 52,000 Californians submitted comments in opposition to methyl iodide’s approval, a signal of the public’s rejection of corporate influence in government, Gilje said. “We are seriously heartened by the increasing groundswell of people are unwilling to accept corporate capture of government and democracy,” Gilje said.

Evan Westrup, a spokesperson for the governor’s office, said “a diverse pool of candidates are being considered,” but could not say when Warmerdam’s replacement will be appointed.

The Environmental Protection Agency has opened a 30-day public comment period on methyl iodide. To read the petition and submit comments go here.

For more information on what you can do:

Editor’s Note: CivilEats today introduces a new partnership with the UC Berkeley Graduate School of Journalism News21 course on food reporting. Over the next several months we will regularly feature stories from students in the class.