Consulting the Genius of the Place: An Ecological Approach to a New Agriculture | Civil Eats

Consulting the Genius of the Place: An Ecological Approach to a New Agriculture 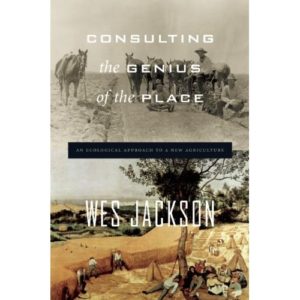 The Land Institute sits atop a sloping hill on the south end of Salina, Kansas, its 600 acres showcasing a living laboratory of grasses and grains being bred to “solve the problem of agriculture.” Founder Wes Jackson lays out the urgent necessity of this task in his latest book, Consulting the Genius of the Place: An Ecological Approach to a New Agriculture, published in October 2010.

Jackson delves into the problem of agriculture by looking to our dependency on fossil fuels, the resulting, rapid degradation of the land, and the reductive, Enlightenment-era thinking that continues to drive us further into deficit spending of the earth’s resources.  He does not mince words in his account of our current predicament, but takes us on a tour of the rabbit hole that has led us to the brink of ecological disaster.  Points are laid clear through personal and evolutionary histories that highlight a need for ecosystems thinking (Part I), accounts of our losses through industrialization and climate change (Part II), and immediate possibilities for the future (Parts III, IV and V).

Throughout his life, Jackson has been informed by the prairies of Kansas and South Dakota and his encounters with such prominent figures in the conservation movement as Aldo Leopold, Wendell Berry, and Stan Rowe.  These men were both his mentors and friends and he regularly draws upon their wisdom in his writing.  Through his promotion of ecosystems thinking, Jackson disputes mainstream cultural and economic assumptions that value monetary capital over ecological capital.

He pushes the reader to undertake a major ideological reorientation that acknowledges the life-giving properties of the non-living biology (i.e., the soil and atmosphere) that is our lifeline.  In taking up this challenge, we are offered the possibility of a new agriculture that can at once conserve the land and sustain the human population.  This is the work of The Land Institute, which Jackson details through an FAQ and a 50-year farm bill he and others recently presented to Secretary of Agriculture, Tom Vilsack.

Jackson engages the reader with personal anecdotes and individual histories, while also requiring a willingness to mull over the information as a cow chews on its cud.  Put another way, Jackson’s style will suit those who have the patience to follow a line of thought and aren’t afraid to delve deep.  For these individuals, it will be a pleasurable and refreshing experience.  However, there are occasions when the point may elude the reader, but this should not detract from the overall breadth of the work.

This book is best suited to the conservationist or to the devoted reader of authors like Wendell Berry.  Yet it is also accessible to the educated reader possessing a passionate interest in conservation and sustainable agriculture.

Whether or not you agree with Jackson’s assertions on our current environmental reality and future prospects, Consulting the Genius of the Place is a thought provoking read that challenges mainstream perspectives and raises issues we cannot afford to ignore.  With 40 percent of our agricultural land seriously degraded and with the loss of an additional 25 million acres each year (pg. 130), Jackson offers a timely solution that promises the potential for a “sustainable and resilient” future.