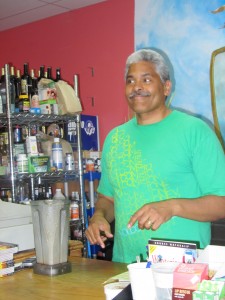 For obvious reasons, advocates would rather support a self-sustaining business in a food deserted neighborhood than turn to expensive government programs. But what kind of store will take that chance? In addressing the problem of food deserts the big questions is, “How do we get fresh food into those areas?”

The answer may lie in small stores like Karrot, a pair of health food shops located in Clinton Hill, Brooklyn, and Central Harlem. A little over 10 years ago, one would have found Karrot’s owner, Carlos Aguila, Jr., in a suit. But after 20 years of watching the boom and bust of dot-coms and becoming disenchanted with the underhanded tactics of finance, he quit his senior-level position at Bank of America. He says he is much happier now.

Carlos Aguila, Jr. is a fit looking man with a thick head of gray hair and a matching mustache. On most days he can be found behind the counter at his Harlem store, where he is ready to greet any customer who walks through the door with a big smile. Behind him hangs a large, handmade smoothie chalkboard with selections like the Hulk, a potent combination of carrots, beet, ginger, chlorophyll, and cayenne pepper. “Drink some of that,” he will say, as he pours a glass of his concoction to the brim. He claims he has the best smoothies in both Harlem and Brooklyn.

Aguila brings his special brand of personality and business know-how to the enterprise. In his slight Hispanic accent, he talks of margins, consumer activity, and negotiating deals. But it is clear he is not in it for the money. “I put in more hours. But it’s a labor of love. I feel like I am enriched by the process, where as when I worked in corporate, it was a very cold, impersonal environment.” As if to illustrate his point, the door swings open and Aguila stops short and calls out enthusiastically to the customer, “Wassup?” He hustles behind the counter to ring him up, chatting and gossiping about the neighborhood. That is a big part of his job, gossiping.

“My day is about making conversation,” Aguila explains. “A lot of people come in here to chat. It’s like a country store. I’m entrenched in the community. I’m not just some guy who shows up here and very cold-heartedly sells stuff and takes money out of the neighborhood.”

It is that kind of “we’re in this together” attitude that has made Aguila a prominent figure in the community. Only recently did he begin to sell craft brews and he still refuses to stock cigarettes and lotto tickets. In 2005 he won the NYC Neighborhood Achievement Award for his first store in Clinton Hill, Brooklyn, where he took a big risk as one of the first businesses to move onto the blighted Myrtle Avenue (named “Murder Avenue”). Now there is a green home store across the street, a muffin shop next door, and a bank on both corners. Having honed his skills there, he placed his next store in Central Harlem where the initiative for fresh food and access to it is vibrantly taking root.

“I think what he’s doing is beyond noble–it’s needed,” says Kamali Williams, a local food advocate with Harlem4 Center for Change. “When I moved to Harlem, I was very excited but also disappointed, because I’ve been shopping at farmers’ markets for 15 years in other cities that were more progressive on food issues.” She stumbled on Karrot while out for a walk two or three years ago. “It became my new best friend.”

Aguila makes it clear that his store is not just for rich folks moving into the new condos nearby. While he is banking on the gentrification reaching up from the Upper West and East Sides, he has a broad customer base. “I get everybody. I get the mothers, I get the college kids, I get the singles, gay, straight, black, white, yellow, whatever. My leading customer is an African American woman who has been living in the neighborhood for years.”

In his Clinton Hill store, the story is the same. On a Saturday within 20 minutes, I see an African American mom with her little girl, a young guy with whom the cashier chats in Spanish, and a British couple.

Karrot is not perfect, of course. Most of its products are organic but because Aguila does not do enough turnover to keep a lot of fresh produce in the store, he specializes in packaged health foods like granola, bread, milk, and supplements. Karrot may not be the cheapest place in the neighborhood, but the extra dollars are worth it to patrons who value stellar customer service.

Now Aguila is facing a new competitor in Harlem. Just a block away, a Best Yet has opened its doors. The supermarket chain has 13 grocery stores in the New York area. Although Best Yet could be vilified as a “big business,” there is no denying it provides a needed service for the neighborhood. Some customers have been splitting their time between the two stores: Karrot for teas and packaged goods, Best Yet for fresh produce. Still, many neighborhoods–especially in Brooklyn–have witnessed the small businesses that pulled the block up by its bootstraps eventually get crowded out by big competitors. Take Williasmburg for example: the beloved Bagel Store is getting replaced with a Starbucks because of drastic rent hikes. Aguila understands this real estate process and has experienced its effects personally.

At one point Aguila himself had four Karrot stores. Two were with partners, which both failed, while the one he nurtured himself in Brooklyn is thriving, and the Harlem location was seeing a 20 percent growth per year until Best Yet walked in. Aguila is tight lipped about exactly how much in sales Best Yet is stealing. “Let’s just say it’s taken a good chunk out of an arm.”

Competition aside, there is something to be said for a returning customer base which Aguila most certainly has. People buy groceries at Karrot because the buying experience is satisfying. Karrot is a special combination of healthy food and healthy relationships–something that a city-dweller may not find so easily outside of a farmer’s market. “I feel like you pay a little more for his input,” one regular customer says. “He works all day and weekends. You want to see a guy like that succeed.”

Alden Wicker is a writer living in Brooklyn, NY. She has written for Huffington Post Green and LearnVest, and is a regular contributor to Elephant Journal. Read more >