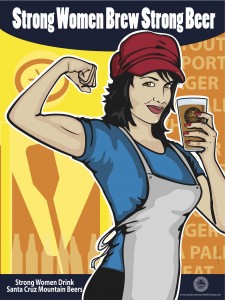 If a women’s place is in the kitchen, then why do men get celebrity chef status?

This age-old question, although archaic, still has some validity when you take a moment to study the statistics on which gender tends to hold more power in the culinary arena. Of course, we can acknowledge and celebrate the legions of legendary women who have risen to the top of the food world, but we should also not forget to keep asking ourselves if things are truly equal.

This holds true in beverage circles as well.  The list of iconic winemakers, distillers and brew masters heavily tilts to male.  So where are the ladies?  Santa Cruz Mountain Brewing is helping to turn the tide.  Opened in 2005 by wife and husband Emily Thomas and Chad Brill (she actually taught him how to brew), they are all organic, integral to the local community, and work to promote beer education through a myriad of events throughout the year.  The second annual Strong Women Brew Day took place on a rainy weekend during SF Beer Week, and the turnout was heartening despite the downpour.  Strong women gathered to learn about, taste and craft the next batch of the brewery’s Belgian Wit. In between hauling canfuls of mash, forklift trips and temperature checks, owner and brewer Emily Thomas ducked inside to talk with me about women and beer.

So tell me more about the Wit.

We took a Classic Belgium style wit, which is a lighter style beer typically made with oranges and coriander, it’s got a specific yeast profile that has some cloves and vanilla.  Both Nicole (brewer & manager) and I are very novice herbologists and so we like the idea of getting some healthy properties while we’re drinking.  It’s more about putting some good stuff into the beer that we’re brewing.  So we brew our beer with St. Johns Wart and lemon balm as well as the orange peel and the coriander.  That’s why it’s called the Feel Good Wit.  We got in trouble with the witches because we were calling it the Witches Wit, based on this idea that witches were just female brewers. It came out in the newspaper and then we started getting these messages on our machine from women who were part of the Santa Cruz Mountain Witches and they didn’t want to be associated with that at all, so we decided to change the name.

Why do you think there aren’t more female brewers?

I think in general beer has always been perceived to be a man’s drink and that just led to men being brewers and getting interested in it. Even with homebrewing, it seems like men really picked it up a lot more, which is strange because originally it was mainly women who brewed, but over time it definitely shifted. I think with beer popularity growing with women, it’s starting to open a lot of doors in homebrewing and brewing in general, but it’s still dominated by men and that can be really intimidating for women to even get their foot in the door.

Are there any female brewers, beside you, working at successful breweries?

Yes. There is a society of women brewers called the Pink Boots Society and I’ve been to a few of their meetings. And there is a brewery started by a women and her husband about 30 years ago called Sprecher up in Wisconsin.  There are also several women in California; North Coast and Stone have some women brewers.

Historically, did women play a role in beer?

Yeah.  One of our customers just gave me this book called Beer in the Middle Ages and I just started reading it.  It is one of the first real concrete pieces of literature that talks about women as brewers.  There is a lot of speculation about how the term “witch” came to become associated with brewing techniques, and all the symbols that were actually part of brewing like the broom and the cats and the kettle and the cauldrons…traditionally they would stick a broom outside their door so people would know this is where you get beer.  Especially in the Middle Ages, women’s work was definitely separate from men’s work, which was building and hunting.  Women would produce food and beverages.

Why do you think a “witch” became such a negative thing?

I don’t know.  I can’t wait to really get into this book, because it did become a really negative thing.  But I think in general during the Renaissance things shifted from solid ideas like this is earth and this is water, and all the spiritual stuff just took on a whole negative connotation.

What compelled you to start this annual event?

That’s a good question.  Well, Nicole and I do a lot of beer traveling and we also do a lot of brewing and we just thought, here is a unique opportunity and nobody else is doing this.  Probably the reason no one else is doing it is because there aren’t that many women brewers and here the two of us are.  We kind of just did it on a whim last year, it wasn’t really well planned, we only had a couple of people, but then people were interested in it long after.  So then it was like, oh yeah, we have to keep doing this.  It’s become this neat thing about us and our brewery.

In general, do you see a rise in women’s participation in brewing?

Yes, I think one thing, especially about this area, and I guess the across the whole country too, is that women in particular are really aware of food and what’s going into it and how it’s being produced. There’s more of a drive of knowing who’s making what I’m going to put into my mouth.  Partly because there’s a big scare about mass-produced food right now, but also because it’s just an interesting thing.  So women are definitely gravitating more towards brewing and doing it themselves, which is a whole other movement too.  Growing it yourself, making your own products, canning, preserving, cheesemaking, brewing…

Do you think it goes along with the resurgence of DIY trends?

Definitely.  That’s the driving force.  Also, beer is evolving so it’s not just fuzzy yellow Budweiser or whatever.  There are so many complex flavors and styles and adaptations, especially for people who like cooking, and that really draws them in and starts to inspire them as a culinary thing too.