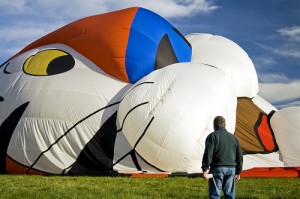 One in four children goes without breakfast each morning, according to the U.S. Department of Agriculture, a tragedy to be sure—but are Kellogg’s breakfast products the solution?

Last week Kellogg announced its new project called Share Your Breakfast, part of a national advertising campaign. The project asks Americans to upload their breakfast photos to the Web site shareyourbreakfast.com, and for each breakfast photo shared, Kellogg Company will donate up to $200,000—the equivalent of one million school breakfasts to help feed children from food-insecure households. Feeding hungry children sure sounds nice, but filling hungry bellies with highly-processed junk foods is hardly the answer.

Let’s take a look at some of the products Kellogg is promoting as part of this endeavor.

Frosted Flakes—one of the products represented by Tony the Tiger at a National Breakfast Day event in New York last Tuesday—contains 11 grams of sugar per three-fourths cup serving. After the first ingredient of milled corn, the next three read: Sugar, malt flavoring, and high-fructose-corn-syrup—three forms of sugar by different names.

Nutri-Grain bars—a product promoted as healthy—contain more than 30 ingredients (minus the synthetic vitamins) and include high-fructose-corn syrup, artificial flavors, red #40, TBHQ, and host of other chemicals. Meanwhile, the front of the package reads: “More of the whole grains your body needs,” “Good source of fiber,” and “Made with real fruit.” The only “real fruit” I could find is “strawberry puree concentrate” and it’s listed after high-fructose-corn syrup and corn syrup. Each bar contains 11 grams of sugar and 3 grams of fiber.

But Kellogg Company knows that people are concerned about feeding their kids sugar and chemicals for breakfast every morning, so it has dedicated whole sections of its Web site to “correcting” false nutrition information. In one section, Kellogg refers to sugar as the “misunderstood nutrient.” According to the Web site, “Sugar does not cause obesity, type 2 diabetes, heart disease or hyperactivity.” This statement flies in the face of the most recent research and a host of mainstream studies that say the exact opposite.

One of the most recent studies, reported in TIME Magazine last year, found that consuming added sugars raises the risk for heart disease by raising cholesterol and triglycerides. The American Heart Association’s (AHA) Web site states, “High intake of added sugars is implicated in numerous poor health conditions, including obesity, high blood pressure and other risk factors for heart disease and stroke.” The AHA is so concerned about the amount of added sugars in the American diet that in 2009 it established upper limits for adults (none exist yet for children, oddly enough). The AHA says that women should get no more than six teaspoons a day and men no more than nine.

Most of the Kellogg products I researched contained an average of 11 grams of sugar per serving, which is close to three teaspoons of sugar. If we assume that the average child weighs about half what the average woman weighs, then three teaspoons is the upper limit of how much a child should safely consume in one day, according to the AHA. That means the child couldn’t eat any other added sugars for the rest of the day (not likely) and that he or she could only eat the single three-fourths cup serving (also, not likely). The AHA says the average American eats an alarming 22 teaspoons of added sugar a day.

According to research by the Yale Rudd Center for Food Policy and Obesity, children will eat cereal with less sugar if the option is made available. The report found that the industry strives to reinforce the myth that children will not eat low-sugar cereals. “The industry has funded a number of studies that find that highly-sweetened cereal is good for children, especially when compared to having no breakfast at all,” the report noted.

Nutrition information based on these studies is exactly what Kellogg has laced throughout its Web site. In the section on sugar, you’ll find, “Keep in mind that a little sugar in foods can help the nutrition go down. For instance, picky kids might be more likely to eat presweetened cereal or drink chocolate milk. They’ll love the taste and you’ll love the nutrients they get from these foods.” This may well be true, but a “little sugar” is a lot different than the 11 grams found in a three-fourths cup serving of Frosted Flakes.

The Rudd Center’s 2009 report also found that some rather insidious advertising techniques appeared to be on the horizon. “What was once a simple marketing landscape—television advertising during cartoons—has morphed into a complex web of persuasive messages even adults may not perceive as marketing. Internet games and marketing through social media such as Facebook are just the beginning and do not capture digital advances that will occur in the future,” it stated. With this new Kellogg campaign it appears that day has arrived.

Make no mistake, Share Your Breakfast is an advertising campaign above all else. According to a New York Times article, the campaign is the largest integrated marketing effort, with ads in broadcast, print, digital, print, and social media. The campaign asks users to upload pictures to Twitter and Facebook, in addition to posting them on Kellogg’s Web site. And while Kellogg has agreed to donate up to $200,000 towards feeding hungry school children, this pales in comparison to the amount the company spends on advertising overall. The Times reports that Kellogg spent $464.9 million on advertising from January through September 2010 and $454 million from January 2009 through September 2009.

Meanwhile, the company is painting a rather rosy picture as to its motivations. “We find there’s a lot of people who don’t have access to breakfast,” Doug VanDeVelde, Senior Vice President for marketing and innovation at Kellogg told the Times. “We just felt like as the breakfast leader, we should do something about that.”

He’s right, Kellogg and every other food industry giant certainly should do something about the hunger problem, but they shouldn’t be filling already undernourished children with food products that are nutritionally void at best.

How about providing funds to feed kids real food for breakfast? Eggs, plain yogurt with fresh fruit, oatmeal, a fresh fruit smoothie with yogurt, milk, or nut milk, a slice of real, whole-grain bread with almond or peanut butter (skip the Skippy!). All of these breakfasts can be made in five to 10 minutes without the added sugar or hype.

Or better yet, why not apply some of that creative talent along with that large advertising budget and produce breakfasts that are nutritious enough to qualify as real foods? Then we could believe them when they say, “The best to you each morning.”

Photo: The fall of Tony the Tiger, by sulakkalus via Flickr