A Cup of Gold: Equator Coffee Sets the Bar for Sustainable and Socially Just Coffee 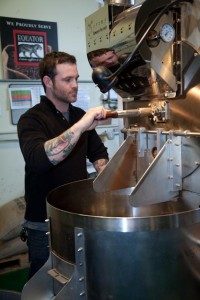 On a recent trip to Africa, I was fortunate to visit several coffee farms and meet the local growers. The work is grueling, the market unpredictable, and the direct rewards minimal in light of the $80 billion coffee trade, in which most farmers around the world earn three cents for a $3 cup of coffee. Overly caffeinated San Francisco, aflutter with buzz about new cafés and roasters, is ground zero for the current coffee craze. But I wondered, while walking through the coffee fields and talking with the workers, (many of whom earn roughly $2 a day), if most folks here also make the connection to the global implications of their morning Joe.

Coffee, the U.S.’s largest food import and second most valuable traded commodity only after oil, is rife with complex issues involving human labor, the environment, and international trade, all of which are succinctly laid out in the 2006 documentary Black Gold and in Daniel Jaffe’s Brewing Justice. According to Global Exchange, there are approximately 25 million farmers and coffee workers in over 50 countries involved in producing coffee around the world. Coffee producers, like most agricultural workers around the world, are kept in a cycle of poverty and debt by the current global economy designed to exploit cheap labor and keep consumer prices low.

The magnitude of the matter is staggering and one might wonder the best way to get a good and fair cup. Fortunately, one Bay Area roaster stands out for its commitment to quality, environmental sustainability, and social responsibility. Founded in 1995, San Rafael-based Equator Coffees & Teas has justifiably earned an outstanding reputation as coffee purveyors and roasters and is far ahead of the curve in advancing sustainability practices that encourage productive relationships and an empowered chain of supply. 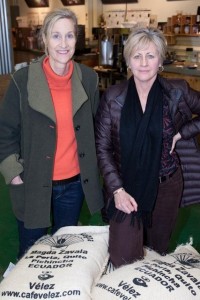 Co-founders Helen Russell and Brooke McDonnell procure coffees from growers who practice responsible land stewardship and ensure superior quality through artisan blend development, efficient small-batch roasting, and cutting-edge brewing technology and training. Over half of Equator’s coffees are certified Organic, Fair Trade, Rainforest Alliance, or a combination of all three. Named America’s 2010 Roaster of the Year in Roast Magazine’s highly competitive challenge, Equator triumphed over 40 of the country’s best coffee roasters for their special blend of quality, sustainability, and business innovation.

Russell and McDonnell see their work as part of a global community in an often over-inflated industry. They forge direct relationships with growers, purchased their own farm in Panama (its Geisha varietal will be harvested in 2012) where they support the local economy, and offer microcredit loans to their farmers, impacting the lives of growers worldwide as well as the long-term supply chain.

“We have a deep respect for the farmers’ work that translates into paying a fair price for our coffee, supporting farm projects and focusing on delivering a quality cup that does justice to their efforts,” McDonnell said. 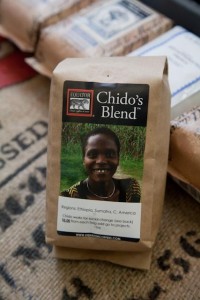 The company’s latest project works to increase food security for orphan girls in Africa. Through sales of Equator’s Chido’s Blend, the company supports the work of Chido Governo, a young Zimbabwean woman who teaches orphaned girls how to grow food using compost created from coffee processing and other agricultural waste. (Coffee waste is ideal for growing mushrooms, an upcycling project providing food security for orphan girls in war-torn countries.) Chido is now training 2,500 women in more than 100 villages in Ghana. Green Coffee Buyer David Pohl recently returned from Ethiopia and wrote about his experience there.

As it turns out, good business is good business: Russell and McDonnell have won numerous awards for achieving 10 to 20 percent annual growth over the past 12 years (this in one of the greatest economic down turns in recent times): Revenues now exceed $5 million. “We are in a business of relationships and they are formed over a well-brewed cup of coffee,” Russell said. “We do this for our growers, our employees and their families and to leave a legacy for roasters in the Bay Area.”

Equator’s commitment to closing the gap between bean and cup, its specialty coffee blends, and its unique, long-term relationships with growers and businesses set it apart. The team has quietly built their empire over years, quickly winning over Thomas Keller, who for the past 12 years has exclusively brewed Equator drip coffee at The French Laundry and since opening Per Se. “Equator provides such exceptional coffee because they are completely engaged at every step of the process and always focused on quality,” Keller said. “They are fastidious about sourcing, roasting, packing, delivery and training, instilling in our staff a sense of what is important about a great cup of coffee.”

Traci Des Jardins of Jardinière and Elizabeth Falkner of Citizen Cake are longtime fans as well. And for those in the know, Equator is on the menu at Arizmendi, La Boulange, and Bouchon bakeries (its latest foray opens in March at Rockefeller Center in NYC, in the former spot coveted by Dean & Deluca). You can also buy your home brew locally at Bi-Rite Market, Rainbow Grocery, Berkeley Bowl, Whole Foods, and even on Facebook—the company was one of the first to get wired via online sales.

This April, you’ll be able to get your fix on the fly, when Equator opens its first retail café at Napa Farms Market in SFO’s Terminal 2. The 4,000-square foot marketplace, designed by Baldauf Catton von Eckartsberg Architects, the masters behind The San Francisco Ferry Building Marketplace and the Oxbow Public Market in Napa, will feature Equator front and center. Bay Area devotees will soon be able to sip and support Equator in a new spot, location TBD. In the meantime, to learn more about the coffee trade, you can go here.

Originally published on Inside Scoop SF