Getting Into the Weeds With Urban Farmer Willow Rosenthal | Civil Eats

Getting Into the Weeds With Urban Farmer Willow Rosenthal 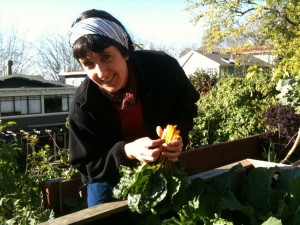 The aptly named Willow Rosenthal grew up around trees in Sonoma County in a community that farmed its own food. Raised by hippies who didn’t have a lot of money, she nonetheless ate well. She also learned how to grow her own food by working on an organic farm and for a local nursery.

She came to the Bay Area in 1997 knowing she wanted to do social-justice work; an internship with Food First and volunteering with the Organic Consumers Association followed.

When she moved to West Oakland, Rosenthal was immediately struck by the absence of greenery, how much vacant, unused land there was, and the lack of grocery stores. She had landed in a community bounded by three major freeways that is also home to a busy port and extensive industrial pollution. People in this predominantly low-income, African American and Latino neighborhood had nowhere close by to buy healthy, affordable food. The area had plenty of corner liquor stores and fast-food joints, but not a single full-service supermarket.

An idea took root. Rosenthal decided to put her farming skills to good use and began gathering community support for a produce plot. In 2000, Rosenthal founded the non-profit food security project City Slicker Farms, after scraping together enough funds to purchase what would come to be called Center Street Farm.

Today, City Slicker Farms has seven urban farm gardens, produces more than 7,000 pounds of produce a year, and has built over 100 backyard gardens for residents of this neighborhood, which has struggled for decades. City Slicker also operates a weekly farm stand where people pay on a sliding scale under the inspired categories “free spirit,” “just getting by” and “sugar mama/daddy.”

After eight years running City Slicker on a shoe-string, Rosenthal, who suffered serious injury from police at a 2003 anti-war demonstration, stepped aside as the director of the group, though she remains on the organization’s board. In November, City Slicker was awarded $4 million in state bond funds for a community market farm and park at a 1.4 acre vacant lot in West Oakland, greatly increasing the group’s ability to grow and distribute food in the community; plans call for a large edible garden and orchard, a chicken coop, beehive, dog run, tot lot, and open space.

A pioneer of the urban farming movement, Rosenthal is featured in the recent Farm Together Now, which last December Michael Pollan called “his favorite book of the season”.

The 39-year-old has joined forces with her friend and fellow urban gardener Novella Carpenter to write a how-to guide, The Essential Urban Farmer, due out next year. Rosenthal works one day a week in the backyard produce garden she built for North Berkeley resident Sophie Hahn, a former City Council candidate active in community affairs, who is working on an edible garden initiative.

When not tending gardens, Rosenthal works as a teaching assistant at the Berkeley Rose School and is earning a teaching credential from the Bay Area Center for Waldorf Teacher Training.

We spoke this week at Hahn’s garden, which features root vegetables, leafy greens, herbs, and chickens, and is in walking distance from Rosenthal’s own Berkeley home.

Was it hard to give up the reigns at City Slicker Farms?

I never thought about it in those terms. It wasn’t “mine,” it has always been a collaborative effort. City Slicker belongs to the community and I’m glad I was able to shepherd it through to its next phase and knew when to leave with grace. The day-to-day management of running a non-profit is exhausting. I’m grateful that we’ve accomplished what we set out to do and that the work continues. 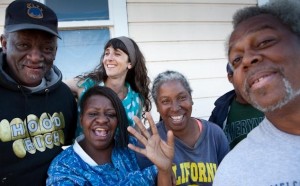 In the past you’ve said you didn’t want to just grow food for wealthy people, and now you are. How do you feel about that?

Well, we all end up doing things we say we’ll never do, right? My point really is that everybody should have access to healthy organic food. I  needed a job while I’m back in school. And I know how to farm. So I put up a flyer near where I live and Sophie saw it and hired me. The beauty of what she’s doing is she gets it, she really walks the talk. And while it’s not cost-effective for her, she’s doing this garden and paying fair wages to farmers because she believes it’s the right thing to do from a health and environmental point of view.

I like that I can walk into Berkeley Natural Grocery and I don’t even have to ask, I know all the produce there is organic. Same thing at the Thursday Farmers’ Market. And what an innovator and trailblazer The Ecology Center is; the place acts out of the highest good. Its programs and people are impeccable.

I love the natural beauty here. When I lived in West Oakland I would come to Live Oak Park just to see trees. I find being in a beautiful tree-filled place is good for my health, energy, and mood.

And I love the food at Saul’s — I used to come to Berkeley just to eat there — I’m Jewish, so it’s familiar comfort food for me.

Who are your local heroes?

Daniel Miller at Spiral Gardens was really my first inspiration for farming in an urban setting. I reached out to him early on. Joy Moore is another person I’ve crossed paths with and her energy and integrity is something else. She’s sheer, well, joy. And selfless. And, of course, my good friend Novella Carpenter: She’s just out there showing people what can be done — growing food and raising farm animals in an urban setting, which isn’t easy.

I want to inspire the younger generation through farming and garden education.