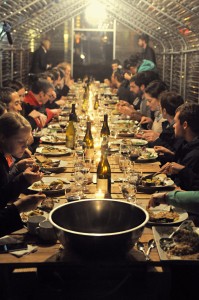 Ellen Gustafson is beaming. She’s sitting at the center of a long table inside a greenhouse at the center of San Francisco’s Hayes Valley Farm and she’s surrounded on both sides by an assortment of guests representing the Bay Area food movement. Every now and then someone will get up and make a toast. The food is locally and organically produced and perfectly prepared and the table and greenhouse have been designed and built specially for the event, but it’s the toasts that have Gustafson smiling. This is the kick-off dinner for the 30 Project, Gustafson’s latest brainchild, and every toast is a new opportunity to hear stakeholders in the food world—from community leaders and authors to artists and business owners—put forth their vision for the food system of the future.

“It’s working!” she says, after a handful of people have gotten up to speak. “I had this idea, but I didn’t know if people would actually do it. And they are!”

Gustafson, a former UN World Food Program employee-turned social entrepreneur, is probably best known for her work on the FEED project, which she co-founded with George W. Bush’s niece, Lauren. The pair raised millions of dollars to provide meals for people in the developing world through sales of burlap bags emblazoned with the word FEED.

More recently, Gustafson has become known for a talk she gave at the TED conference last spring. If you’re at all interested in food and you spend any time at all online you’ve probably seen it; she starts off by saying, “When I’m hungry, I’m really pissed off,” and goes on to draw a connection between global security and food security while addressing the polarity of today’s food system in an eloquent, disarming manner. Now, Gustafson has left her role at FEED to do more speaking on the food system and to invite others to do the same.

Which brings us back to the evening’s toasts. The idea behind the 30 Project dinners is a simple one; Gustafson and her team of collaborators plan to host dinners for 30 people in 30 cities (around one dinner a month) over the next few years. But the number 30 has a deeper significance, as well. It was around 1980 (or three decades ago) when the first genetically modified crops became patentable, Gustafson pointed out. That was also around the time when high-fructose corn syrup became available on the market and other changes, such as the increasing consolidation of agriculture, really set the stage for the systematic challenges we’re facing today. “I’m making the case that our food system has been in its current state for almost 30 years,” she told the group. “We can have a better food system 30 years from today if we all sit down and talk about it.”

While Gustafson’s approach takes cues from the grassroots, she also hopes to leverage corporate interest (her CEO was most recently in marketing at PepsiCo., and representatives from Annie’s Homegrown and Safeway were both present that night). Although the 30 Project plans to use media outreach, help network its participants and convene a summit, the dinners themselves are a corner stone of the group’s strategy. And the result is perhaps as much about cultivating an  aesthetic and serving delicious food as it is about concrete steps toward systematic change.

The greenhouse and table that were built for the event were the product of C-Lab and Architecture for Humanity (and donated to Hayes Valley Farm after the event) and looked like something from the pages of Dwell or Sunset magazines. The meal itself was prepared by established chefs, each representing a unique segment of the Bay Area culinary scene: Leif Hedendal, Laurence Jossel of NOPA, and  the pastry team at Chez Panisse.

The visions put forth around the table were inspired and varied. Bob Corshen from Community Alliance with Family Farmers spoke about the importance of recognizing farmers and the traditions they carry forth, People’s Grocery’s Nikki Henderson spoke about community self-determination and food justice, Co-Fed founder Yoni Landau talked about finding connection through food, and Farmer Jane author Temra Costa addressed women in the food system. If the group present has anything to do with it, the year 2040 will see a populace well-armed with an abundance of knowledge and respect for food production—not to mention safer, healthier food that is accessible to everyone.

Near the end of the evening, Dana Harvey, executive director of Mandela Marketplace, a small community grocery store in West Oakland, stood up and made this poignant addition, “I hope, in 30 years we see a dismantling of corporate control over our food.” Harvey’s vision, and the questions it raised—about how to make real change in an increasingly privatized world when so many of the most viable solutions (e.g., farming without patented seeds or synthetic fertilizer ), seem to resist corporatization–lingered a little longer in the cool March air than the other statements.

Yet, one not need be explicitly anti-corporation to crave a revamped food system. Or that appears to be the assumption Gustafson and the 30 Project are working under. The night’s guests, themselves, represented a full continuum of beliefs, but few could argue with the idea of making space for mainstream participation in the food movement. It’s a task so large, it might only be possible through the work of the same woman who convinced the nation that a tote bag made of burlap could be fashionable.

The next 30 Project dinner will take place in San Diego at Valley Site, a farming training program for veterans in San Diego. Visit the 30 Project site to plan your own dinner.