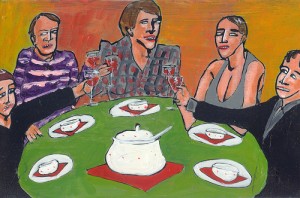 The story of the modern family dinner has been on the table, so to speak, for a while. Time published an article on the statistics behind family dinner in 2006. But in the wake of the passage of the Healthy, Hunger-Free Kids Act I’ve noticed a new emerging wave in the good food movement that focuses on family dinner.

A few new non-profits and cookbooks are drawing attention to how family dinner can be the engine that drives the good food movement: our growing health crisis, the quest for a robust regional food system, the affordability and the access difficulties–all these issues manifest themselves at the family dinner table. Could there be a more significant expression of food’s importance than an intimate group of people sitting down together to share nourishment?

If you look at that image in the Time article, you see the smiling, white, nuclear family enjoying a multi-course meal. (Sure, I’ll give you that it’s probably ironic.) What’s new about the current dinner movement is that we’re finally moving past this ideal and getting real about the challenges of feeding a family–and while we’re at it, we’re also changing our notion of what a family can be in the first place.

I don’t need to tell you about the statistics myself–for every issue in family life, from academic performance to health to drug use, family dinner is a solution. What’s new about family dinner talk, though, is the focus. For the most part, proponents of family dinner are not looking at this ritual through idealized lenses, but are instead acknowledging and meeting head-on the of the challenges that keep us from eating dinner, at a table, all together.

Bill Mawhiney founded the nonprofit Time at the Table just last year. Through his organization he hopes to help people with many of the challenges–time, cooking skills, lack of tables even–that keep families from eating together. But he is also interested in expanding the definition of family dinner to something more inclusive, that greater numbers of people can identify with.

“The idea of family is open to interpretation. Family is what you mean in your heart,” Bill says, and he would know. For three years he was a guardian to a troubled teen, now 21 and living independently. Bill’s dinner epiphany came from a dinner party with friends. He had moved away from his roots in the Midwest and settled in New York City, and as a single guy he sought to create a new family (he now has a partner of five years). While hosting a dinner party with friends he suddenly realized, “Never once did we turn on the TV and never once did we leave the kitchen table. Why don’t we do this more often? I did this as a kid. Now we’re all eating around the TV, and we’re eating crap, and it just snowballs from there… This is where my mission needs to head, where I need to focus my energy.”

Bill is especially interested in reaching out to single people with roommates, college students, and single parents.  He recently did a workshop in a Kansas City assisted living space for people with disabilities. The residents live in a dorm-like setting with individual apartments. When Bill came in he noticed that the posted menu for the residents featured Hamburger Helper for four different meals. Realizing how far the residents were from enjoying whole-foods cooking (“But we like Hamburger Helper,” they told him,) he designed a recipe that mimicked a favorite Hamburger Helper dish but used fresh ingredients. And with grocery budget is $65 per person every two weeks, he’s shopping with the residents at Walmart. He believes in meeting people where the are.

“There’s lots of great information [on the importance of family dinner] out there, but you don’t really see the story of families and what they struggle with: time, money, motivation. We know what families struggle with, but we don’t know how to handle those struggles.” In addition to workshops, Time At The Table is gathering solutions in the form of recipes, shopping lists, and videos.

Laurie David’s new book, The Family Dinner, is taking on those struggles, too. Previously known as an environmental activist and producer of An Inconvenient Truth, David is now becoming famous for having gotten her ex-husband to the dinner table. In fact, it’s her divorce that makes The Family Dinner such a powerful book; the ritual kept her family afloat through the crisis of divorce.

Laurie emphasizes that family dinner doesn’t have to happen every single night, and it doesn’t have to include a three-course meal. What’s most important is that the family have “ritualized access to each other.” Hers is a no-guilt approach, but she still makes it clear that if you really want to make family dinner happen you have to make it a priority.

I thought of Laurie David when I read Peter Wells’ farewell column for Cooking for Dexter. He lamented that he worked too much (responding to e-mails features prominently) to make family dinner happen. “In some circles, it has become kind of cool lately to talk about those of us who don’t manage to cook for our families as an abstract but urgent societal problem.” If I could get him in the same room with Laurie I imagine she’d give him some of the same advice she gave me.

“If you can’t do dinner, find another ritual that brings you around the table together, like breakfast or a bedtime snack. It’s about creating happy, cozy, family moments, where you’re reminding yourself ‘this is why it’s so good to have kids.’” As for those kids, even if they’re at the age where dinner is more chaos time than cozy, Laurie urges parents not to wait. “They’re in training. They will be teenagers someday, and that’s when you’ll really need the ritual in place.’” Her book is filled with ideas for making dinnertime meaningful for kids of all ages.

Grace Freedman, a public health researcher, founder of EatDinner.org, and mother of three, takes issue with the practice (common among professional families) of holding one dinner for the kids and a later, separate dinner for the parents. “If you get into the habit of feeding kids on a different schedule than the parents or different foods than the parents eat, that can be a habit that undermines family dinner.” She adds that everyone sharing the same food can pull you out of the “kids’ food” trap and encourages more experimentation “I council not to fight over the food, but just to offer it. I think there’s something about sharing a meal that has cultural value. It’s okay if not everyone likes everyone likes the meal every night.” (It’s true, my son doesn’t love every meal I cook, and yet he has not starved to death.)

Parenting media editor and writer Jenny Rosenstracht might point Peter Wells to the book Spousonomics: Using Economics to Master Love, Marriage & Dirty Dishes. The authors recently wrote a paradigm-shifitng post on Jenny’s blog about managing dinner for busy families. Jenny herself is working on a book titled Dinner, A Love Story. “What led me to focus on family dinner was the fact that family dinner was getting the short shrift in the conversation! It’s almost always positioned as a chore, a dreaded inevitability, a major source of stress. I wanted to shift the tone and show how much fun it could be, too. How valuable. That’s why it’s a love story!”

How do we get from unhealthy habits to a love story, especially with families who work nights or who have poor access to healthy, affordable food? Health and hunger organizations are working on the big picture of access and affordability, but people like Bill Mawhiney and Grace Freedman are helping families deal with the food system we have now–table by table.