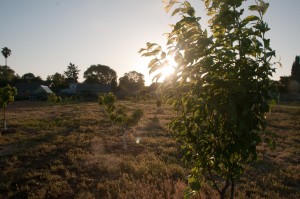 Silicon Valley is a shockingly inequitable community with a sad legacy of pollution and shortsighted land use decisions. With more superfunds per acre than anywhere else in the country, the high-tech industry has made this valley home to many of the country’s top one percent of earners. It’s also the same industry that has polluted our lands and waterways.

Daily reminders of both poverty and excess are everywhere—in homes, schools, and gathering spaces. Vulnerable families, who find their kids given the short end of the healthy living stick, suffer incredible health disparities—not surprising when you see the junk food being marketed and sold in schools, the distinctive lack of affordable fresh food, and the unsafe outdoor environments without green space.

Farms and gardens present an elegant solution to a big, intractable problem. Our country needs green jobs, healthier schools, and access to fresh, affordable food for all. From Brooklyn to Berkeley, urban farms provide all three—and they are popping up faster than radish sprouts. Still, these spaces and their solutions are teetering on the brink of disaster because of one core issue that the food movement has yet to address: permanent protection of urban lands for community use.

Here is how we address it. A conservation easement donation is a process structured by the federal government, designed to encourage the donation of the development value of a parcel. It allows substantial tax benefits to the landowner, in exchange for permanently restricting the use of the land. In effect, it takes developers’ dollars out of the equation. An easement constrains a property by dedicating it to a certain use (such as agriculture or open space) in perpetuity, so that the public benefits, both now and in the future. Both private and corporate landowners qualify for substantial tax deductions that are usually equivalent to the lost “value” granted by the easement donation.

It is very rare that a landowner would preserve land without any financial gain. You can’t exactly blame them: there are college funds, retirement plans, and family security tied directly to the value of that land. Urban land value is primarily calculated by the profits that can be made by developing that land into condos, strip malls, or parking garages. Agricultural use can’t compete, even though small parcels bring the greatest connection to food and green space directly into a community.

Traditional land trusts focus on rural land, because donors are primarily concerned with the number of acres preserved, and because urban preservation is often about the “viewshed” not the foodshed—preserving the expansive green hillsides above our region’s many million dollar homes. But new coalitions like the Sacred Community Land Trust, based out of Oakland, are wholly focused on urban community benefit–targeting small urban plots that connect families directly to the source of their food.

Here in California, Governor Brown’s recent proposal to eliminate state funding for the Williamson Act is not the tightening of a belt—it is the cinching of a noose. The Williamson Act, which exempts landowners from property taxes when they pledge 10 years of agricultural use on their lands, has been a keystone of small farm creation in California. Already in a life or death struggle, California’s remaining small family farms will be strangled without the Williamson Act’s protections. For California’s small-scale agriculture to survive, we need to work actively with landowners to protect their lands through conservation easements. We are in a now or never moment.

Back in 2007, when we were out planting the first cover crops at Full Circle Farm, a neighbor approached. Standing next to the beautiful, black, newly disked soil, he shared his memories of the plum orchards that once covered the fields. He was born here in Sunnyvale, California in what was once known as the Valley of Heart’s Delight. His childhood was spent running through fields of snowy white trees in the spring, and enjoying the taste of a ripe, stolen fruit in the summer.  When he got older, he worked as a picker and pruner, giving him a lifelong taste for simple, hard work.

In 1963, the orchards were demolished to make way for “progress.” He and his neighbors held hands and cried as the bulldozers plowed the (I kid you not) blooming white trees into the earth. He never thought that orchards would be planted here again.

The sad truth is that someday the orchards at Full Circle Farm could be plowed under too. The many orchards, gardens, and urban farms remaining in Silicon Valley are at terrible risk. When the financial interests of landowners change, leases just don’t hold water.

Today, we need to create the legal, economic, and community structures which permanently secure land for urban agriculture and we need to save our last remaining working farms. It is time for Silicon Valley to see to it that our land is preserved for community food, and to create a primer that allows other communities to do the same. In order to make urban farmland protection a priority, we need to create a knowledge base that will allow any group of dedicated food activists, in any community, to permanently protect their growing spaces—no legal degree required.

Without permanent places to grow, learn, and celebrate, the slightest economic upswing will destroy the urban farming movement in its infancy. Here and across the nation. All communities will suffer, but who will be hit first and hardest? Communities of color, those with the least economic resources, and those traditionally disenfranchised by the interests of wealthy landowners. It is on our collective shoulders to make sure that does not happen.

Based on an opinion piece by Liz Snyder and Hank Herrera, previously posted on MercuryNews.com