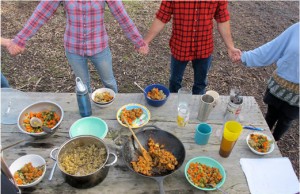 Say you’re a college student ready to eschew the standard pizza-burrito-pretzels-beer diet and start eating more whole, sustainably produced foods. Say you want to take it a step further and work to make healthy and ethical food widely available on your campus–without the gourmet grocery store prices. Well, you might consider starting a co-op.

“There are so many students learning the theory behind food systems who are itching to put it into practice, and co-ops are the way to do it,” says Enosh Baker, a recent UC Davis ecology graduate and a regional organizer with the Cooperative Food Empowerment Directive (CoFed). Baker and his cohort of mainly unpaid organizers see campus co-ops as the answer for a few convincing reasons.By cutting out the middleman, using volunteer or member labor, and hooking into university resources such as subsidized rent and student entrepreneurial funds, co-ops can radically reduce overhead and offer sustainable foods at prices even students won’t scoff at. Co-ops also serve as working classrooms and events spaces, and, as the CoFed team sees it, introduce concepts of food sovereignty and food access to an audience whose adult lives are still taking shape.

CoFed started after a group of students at the University of California, Berkeley successfully organized to channel funds from a UC fee referendum into the creation of the Berkeley Student Food Collective, a new store at the edge of campus. The two groups are no longer affiliated, but the process of forming the collective spurred CoFed founder Yoni Landau to start working toward a national support network and resource-sharing model for students looking to start co-ops on campuses all around the country.

Around a year later, a team of student leaders are creating organizing hubs in six key areas–Northern California (Baker’s jurisdiction), Southern California, New Mexico, Massachusetts, Philadelphia, and Maryland. Each leader is working with students from 10-20 schools.

When students contact CoFed organizers about organizing a co-op on their campus, they’re given a concrete list of tasks to undertake. “We tell people the first step is to organize a core team of students. From there we provide them with a lot of resources,” says Baker. CoFed also gathers students together for workshops and strategy-sharing. In June they’re planning to host six simultaneous retreats, intensive experiences that will arm dozens of students with the ability to write a business plan, do bookkeeping, organize other students, and build a power map of their own campus. 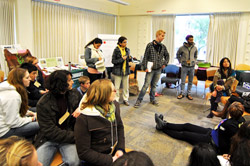 Why exactly is the idea of the cooperative business, a conceptual centerpiece of an earlier time, making such a comeback? Baker believes the stakes have been upped. “When the co-ops in the early 70s were getting started,” he says, “There was some knowledge about the early impacts of the green revolution, but [industrial food] was still relatively young. Our generation has born witness to what’s happened since, and the situation is much more dire.”

Although they’ve been peripherally involved in the recent formation of a co-op at the University of Washington, CoFed hasn’t been directly responsible for the launch of any new project yet. But the June training is likely to lead to a number of successful new student co-ops in the 2011/12 school year.

At UC Davis, students like Kase Wheatley are hoping to be part of this first round. Wheatley and a handful of others are envisioning a café and store that also has a community supported kitchen element, which will offer pre-made prepared foods like soups and cooked grains in a box for the week. “It’d be targeted at freshmen as an alternative to the Sodexo-run dining services on campus,” says Wheatley. So far they’ve recruited around 40 people and they’re in the process of tapping into a new fund set up to provide seed money for young businesses on campus.

“UC Davis is in the center of California agriculture and we source less than 25 percent real food,” he adds. “We can do so much better.”  Like many of the groups aspiring to start co-ops, the Davis collective relies on the Real Food Challenge definition of real food: “Food which truly nourishes producers, consumers, communities, and the earth.”

As Wheatley sees it, a co-op at UC Davis has the potential to become a source of pride for the school–this might be what sets today’s co-ops apart from their 70s counterparts. “Sustainability is such a big issue on campus right now; it’s something students are starting to look at when they consider which college they’re going to.”

Enosh Baker is optimistic about the possibilities of the student co-op movement, but he says the challenges are not insignificant. Students, by nature, are a transient population, so it’s tricky to build any kind of organizational structure around their fluctuating commitment levels. “They’re also starting businesses in the food sector,” he says, “Which has the highest rate of failure of any sector.” And, because the co-op model is designed not to make a profit, attracting investors requires clear messaging about the larger purpose at hand.

The real challenge, says Baker, “Is to broaden people’s horizons and prove that co-ops are worth it–that businesses that will provide community wealth and have a role in changing the face of the food system are worth it.”

Learn more about the CoFed effort on their Web site.