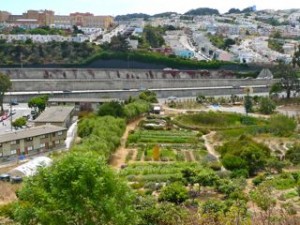 On February 17, 2011, the San Francisco Planning Commission passed a resolution approving a new urban agriculture planning code that would allow a range of urban gardens and farms to be located throughout the city. The new code creates an agricultural use category with two sub-uses (Neighborhood Agriculture and Urban Industrial Agriculture) that represent different scales and intensity of food production.

The Planning Commission’s action is an important step toward integrating various scales of food production into San Francisco’s landscape, creating certainty about where and to what extent urban land can be used to grow food. San Francisco residents are environmentally conscious and the Bay Area is where the word “locavore” was coined, yet even the most fervent sustainable food supporters can have NIMBY tendencies when urban farms sprout near their homes. The code change will hopefully create consistent expectations and ensure that gardens and farms can locate throughout the city and improve–not detract from–the quality of life for which San Francisco is famous.

If enacted by the city’s Board of Supervisors and signed by the Mayor, as anticipated, the city’s planning code would for the first time clearly define the status of urban agriculture in San Francisco by identifying where small and large scale farms can be located, letting property owners, urban farmers, and ordinary people know exactly what kinds of agricultural uses are allowed in any given place.

Neighborhood Agriculture is any use for food or horticultural production that occupies less than one acre. It includes but is not limited to home, kitchen, and roof gardens. The use of a site for food production may either be “principal” or “accessory” to other uses, such as a private home. These smaller growing spaces must also comply with the following standards:

·      Sales and donation of fresh food or horticultural products grown on site may occur between 6:00 a.m. and 8:00 p.m.  People are allowed to sell produce from their garden/farm but cannot create a storefront in or make commercial improvements to their home that turn it into a defacto grocery store.  They cannot sell value added foods like jams or baked goods.
·      Compost areas must be set back at least three feet from structures on adjacent properties.
·      If fencing encloses the farmed area, it must be wood or ornamental and comply with a section of the planning code that regulates fences.
·      Mechanized farm equipment is prohibited in residential districts except during the initial preparation of the land, when heavy equipment may be used to prepare the soil. Landscaping equipment designed for household use is permitted in residential districts. All farm equipment must be screened from sight.

Urban Industrial Agriculture uses describe farms that are one acre or larger, or smaller farms that cannot meet the physical and operational standards for Neighborhood Agriculture. This more intense use is principally permitted as-of-right only in industrial districts. In all other districts, creating a farm one acre or larger requires conditional use authorization, which is granted only if the project is deemed necessary, desirable, and compatible with the district.

The proposed zoning changes were widely supported, though urban agriculture practitioners and supporters raised a few concerns: (1) that the fencing requirement was onerous and unnecessary; (2) that the fee for obtaining a change of use (currently $300) was prohibitively high for smaller growers; (3) that selling value added food is an important source of revenue and an appropriate activity on an urban farm; and (4) that urban soils may not be safe. In approving the code changes last week, the Planning Commission called for further consideration of these issues.

Another concern was raised by the San Francisco Public Utilities Commission (SFPUC), which supplies the city with drinking water. Staff at the commission noted that large-scale urban agriculture would increase water use, despite the fact that a programmatic Environmental Impact Report for SFPUC in 2008 limited the amount of water consumption through 2018 and required that any increases in water use be met through conservation, recycling, graywater, rainwater harvesting, and city groundwater. Given that the expansion of urban agriculture in San Francisco will require that more alternative water sources be developed to meet the increased demand for irrigation water, SFPUC recommended adding requirements that urban farms use water-efficient practices.

Stay tuned for any fine-tuning that may happen at the Board of Supervisors.