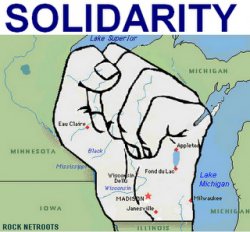 Food and politics often come together in peculiar ways.  It’s not that their coming together at all is unusual – far from it.  Civilization and politics are both a direct result of agriculture.  But these days food’s impact on political discourse can lead to some odd sights, such as free pizza being delivered to protesters in Madison, paid for by sympathetic activists in Egypt.

In a story first broken by Meredith Shiner at Politico, Madison landmark Ian’s Pizza got a call from a person in Egypt ordering pizza for the protesters in the capitol building around the corner.  Ian’s put out a tweet about it, and since then according to the article the little pizza place has delivered over 300 pies and given away over 1000 slices thanks to the support of people in 48 countries (last count) and all 50 states.  So shines a good deed in a weary world.

All this was begun by a single concerned Egyptian, who had just played a part in toppling a decades-old regime via protests that centered on–among other things–food prices.  Similar complaints led to similar results in Tunisia, and are now boiling over in Bahrain, Yemen, and Libya.  Here in the US the protests are about labor rights, but they too are beginning to spread, notably to Indiana where a (now former) Assistant AG called for the use of deadly force against the protesters.  There have been similar protests–though admittedly not as big yet–here in my home state of Iowa and in other states.

Not that the protests in Madison and elsewhere are about food supplies, but in so much as the Governor there is chipping away at the collective bargaining rights of the state workers, so he is doing it to all unions, and thus all workers.  Those who oppose the unions do not see this.  Witness the tea party counter-protester in Madison last Saturday who told the press he hadn’t been there earlier in the week because “unlike the union people” he couldn’t just blow off work and had to wait until the weekend–a weekend he has thanks to the very union he had just come to counter-protest.

Labor rights have a direct connection to food supplies and always have.  From farm workers to slaughterhouses to transportation to building those trucks and tractors, America’s thirst for cheap food has come at the expense of those who provide it and the enrichment of a relative handful of wealthy executives.  Farm employment in my part of the country has dwindled as farms have enlarged, and even those farms that do require large amounts of human resources are getting those hands from often underpayed, undocumented workers.

There have been a few success stories (witness the Coalition of Immokalee Workers), but for the most part our drive to lower the percent of our GDP spent on food, even while we triple the percent spent on health care,* has given us a nation where one in three children born after 2000 will develop diabetes.  One in two among minorities.  Cheap calories make unhealthy people.  There has to be a better way.

Ian’s Pizza may have inadvertently taken a small step towards that better way.  Granted they are indeed capitalizing on this circumstance, and there’s certainly nothing wrong with that.  And granted, pizza cannot often be construed as a healthful food (though sometimes it can).  But rather than constantly putting our national efforts into making food cheap enough for all our poor to be able to eat, why not expend at least a little of our efforts in making it possible for people to have the financial strength to buy good food?  Unions help make that possible.

They are no panacea, of course, but when you put your feet up or go out to your garden or out for pizza this weekend, thank the unions.  The employer-based health care system that the tea party fought so hard to protect?  Unions began that.  Social Security and Medicare?  Unions again.  Child labor laws?  Unions.  It’s not so hard to believe maybe unions would have a role to play in making our food system Good, Clean, and Fair.