Serving With the Sun | Civil Eats

Serving With the Sun 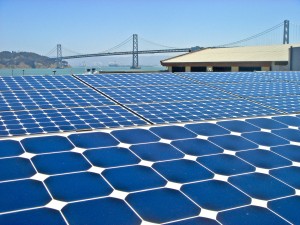 I’ve heard stories of making granola bars under the heat of the sun, and I’ve seen advertisements attempting to sell $250 solar ovens. But developed and developing countries alike are proving that a scaleable solution for widespread use and availability of the sun’s heat has the potential to greatly affect our daily cooking practices and the concepts behind food production. In America, restaurants are experimenting with solar panels for operational use, even though the cost is still high for harnessing the power of the sun. And in some developing countries, solar cooking has come to mean survival–its value as an energy resource is vital to human sustenance.

In San Francisco, The Plant Organic Café has installed solar panels on its roof for sustainable energy usage. “We use the power of the sun to cook your food,” The Plant advertises as its slogan, and the restaurant draws a diverse crowd for its specialties like the “signature” Plant burger (bright magenta vegan patty, house made with packed beets, bulgur wheat, and lentils). The 6-kilowatt system, covering between 400 and 500 square feet, costs approximately $75,000. It supplies the restaurant with 25-30 percent of its electricity needs—a steady start for a promising alternative energy source. The restaurant also received an $8,000 rebate under the GoSolarSF Program. Financial incentives, it seems, may prove to be the jump start establishments need in order to start thinking about going solar.

But despite solid efforts to create a sustainable restaurant space, The Plant met with unforeseen design complications in its application process to becoming LEED certified. The U.S. Green Building Council that offers the certification program takes into account a variety of initiatives when reviewing applications: site construction, materials and resources, water efficiency, energy, and atmosphere. There are currently very few small buildings that have met all benchmarks to be certified LEED. The price of certification has been another obstacle. The Plant’s development plans for becoming certified proved expensive, but co-owner Matthew Guelke says that he would certainly try it again. “It takes a couple of years to pay off, but it’s an ethical, environmentally-positive stance we like to take.”

There are still a few small restaurants that are LEED certified. These include the Founding Fathers Restaurant in Washington D.C. which claims to have “high-efficiency water and energy usage,” and the Red Stag Supper Club in Minneapolis which couples LEED certification with local and organic cuisine. Red Stag owner, Kim Bartmann, tells The Daily Green: “The Stag opened using 70 percent less water than a typical restaurant, and 50 percent less energy—greatly reducing our operating costs.” Surprisingly, many other LEED certified restaurants are franchises of fast-food chains. According to The Daily Green, only 38 restaurants have received LEED certification, and 40 percent of those (about 15 in all) are chain restaurants, including nine Starbucks, two McDonald’s, a Subway, and an Arby’s.

Across the world in eastern Chad, solar use tends toward necessity rather than trendiness: The Iridimi refugee camp, run by the Jewish World Watch and KoZon, has been helping refugee women find alternative methods for cooking to avoid the risky task of finding wood and water outside the camp. 14,000 cardboard and aluminum foil cookers are used daily to feed 17,000 refugees.

In other regions of the world, solar cooking has developed as a means to reduce firewood consumption where wood is expensive and scarce. The Villasceca Solar Restaurant in Chile functions solely on solar energy. With a $10,000 research grant from the United Nations Development Programme, the Association of Solar Artisans of Villaseca started the Solar Restaurant which has been serving dinners of fresh bread, meat, and flan to about 70 people a day since 1989. The restaurant uses metallic sheets to reflect solar heat into the oven interior.

While there are limitations to solar cooking (longer cooking times, a cap on mouths fed a day, limited menu items, and shorter serving hours), perhaps this cooking method can be viewed for its positive reach. Under the beating hot sun in Cuba, Joe Froese served up solar-cooked pizzas to tourists on a beach as early as 1995, and in India, The Ladakh Project is spreading solar cookers in a region that gets “roughly 320 days of sunlight a year.” As solar cooking becomes more mainstream, we may learn that a calculated approach to food preparation allows us to waste less food while cooking more sustainably, abiding by the rules of the sun.

Heather Hammel is a student in the politics department at Princeton University and the author of the food blog Soufflé Days. She is currently an intern at Seedling Projects and the Good Food Awards. Read more >