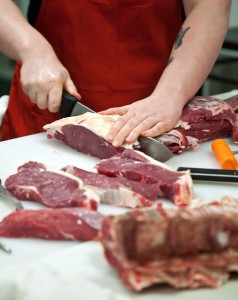 The Portland Meat Collective (PMC) has its origins in a bavette, dined on in a steakhouse in Portland, Oregon, which led founder Camas Davis to France. Following two months of pure contact with knife and animal, cutting and slicing with a family of butchers in France, Camas now strives to teach Portland her approach to butchery, through classes and interactive training.

Surrounding her in Portland is a prevailing consciousness about food and its sourcing. Due to the varying tastes of the community, Camas has persisted in broadening the scope of course offerings and locations. Initial butchery courses attracted patrons from diverse backgrounds even people outside of the food milieu–and classes range from the basics of pork butchery to the artisanal technique of charcuterie. Davis believes that conviviality is inherent in butchery. Homeless shelters, youth program centers, and culinary schools are among the multitude of places where students receive instruction, often taking on the role of the teacher or assistant.

Volunteer work is an alternative payment for course tuition. For the meat scholars that support class instruction, the program is free. Students may elect to audit a course—and not take meat home—to save half the tuition cost. Regardless of age, expertise, or financial means, the courses foster an atmosphere of commune and exchange for everyone, allowing patrons to meet more than their meat. 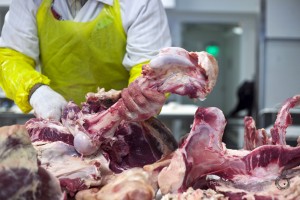 When the organization was launched, the established meat-buying model permitted the inception of the classroom program. Eventually, strong student demand persuaded Davis to grow the model for community purchasing, and PMC is now piloting a meat CSA. Large meat cuts are obtained directly from producers for delivery and storage in the PMC kitchen. The CSA’s aim is to influence meat consumption practices by promoting purchases of large cuts from recognized producers that can be shared. Information, such as producer profiles and meat background, will be openly accessible to members through the CSA website. From point of purchase, to preparation and consumption, Davis’ model presents a personal and comprehensive food consumer experience.

Among patrons’ individual evolutions, Davis has witnessed the rise of consideration and concern for ingredients and preparation. Students’ perspectives and dietary choices are slowly being molded by new interactions. Without even expressly conceiving of it, the collective has helped to make comfort and familiarity with meat the norm. With this normalcy comes conviction that meat is a valuable commodity, commanding moderate and respectful consumption. At the collective, distance and ambiguity around food origin is non-existent, while community education, closeness, and clarity abound.

Gianna Banducci is studying the realm of gastronomy through the Food Culture and Communications Master program at L'Università di Scienze Gastronomiche. She currently lives in the Piemonte region of Northern Italy. Read more >