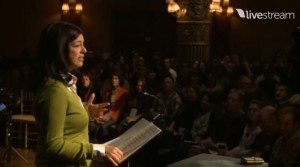 Last weekend at TEDxManhattan, over twenty speakers covered a wide range of issues under the mantle Changing the Way We Eat. While the TED and TEDx events have focused on food politics before (you can see some of our favorites here), this was the first TEDx event dedicated solely to the issue.

TEDxManhattan focused on three aspects of the conversation: identifying the issues facing the food system, looking at the work being done now to remedy them, and looking at the new models an ideas emerging.

Hatched by the Glynwood Institute for Food and Farming, the event featured speakers like Curt Ellis who discussed FoodCorps, a farm-to-school service program; Laurie David, who talked about the power of the family dinner; Brian Halweil, who focused on food as the solution to our problems; Melony Samuels, who spoke about contagious urban gardening and her campaign against hunger in Bed-Stuy, Brooklyn; Cheryl Rogowski, who discussed the constancy of change and learning on her farm; Britta Riley, who focused on crowd-sourcing R&D (what she calls R&DIY) for her project Windowfarms; Ken Cook, who used lovely visuals to talk about the upcoming Farm Bill and where farm subsidies are being paid out; Josh Viertel, who spoke about building a movement focused on policy, and the importance of thinking, seeing and doing in equal measure; and many more.

Soon the videos will be available to watch individually (and I’m sure some will go viral). But meanwhile, you can still watch the event in its entirety here, here and here (or read liveblogging by Derek Denckla here).

Bryan Walsh from TIME Magazine covered the event, using it as an opportunity to argue that the food movement has the potential to rescue the environmental movement from its current abyss. He writes:

Even as traditional environmentalism struggles, another movement is rising in its place, aligning consumers, producers, the media and even politicians. It’s the food movement, and if it continues to grow it may be able to create just the sort of political and social transformation that environmentalists have failed to achieve in recent years. That would mean not only changing the way Americans eat and the way they farm — away from industrialized, cheap calories and toward more organic, small-scale production, with plenty of fruits and vegetables — but also altering the way we work and relate to one another. To its most ardent adherents, the food movement isn’t just about reform — it’s about revolution.

I highly recommend you read the whole thing.

Showcasing the diversity of ideas within the food movement, TEDxManhattan is further proof that that movement is becoming more unified. And it promises to become an annual event, which is good news for those who seek out new voices and new ideas for how to tackle big problems facing our food system.

Featuring delicious food and drink by Mary Cleaver, City Bakery, and others, the attendees of TEDxManhattan were also well fed. And how lucky we are–because if food is the solution to our problems, the revolution will be delicious.