For Fair Food, Even the Big Guys Need to Play by the Rules | Civil Eats

For Fair Food, Even the Big Guys Need to Play by the Rules 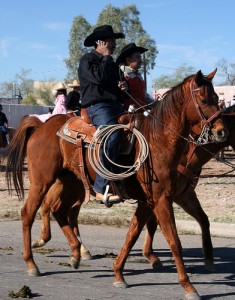 On Valentines Day, while most people fretted about dinner reservations or flowers, a coalition of livestock producers, agriculture groups, and consumers took time out to show a little love for fair food by participating in a national call-in day to the White House. Over 2,000 confirmed calls were placed throughout the country to the White House to ask the Obama administration to finalize and implement fair livestock marketing rules.

In St. Paul, Minnesota, an activist named Cathy took the day off from her job, set up an information table in her local co-op and asked 75 people to call the White House on behalf of fair food. She has seen family and friends who were farmers suffer because of bad federal agricultural policy.

In Chicago, Floriole Café & Bakery and the Dill Pickle Food Co-op hosted call-in events with members of the local food community. They placed approximately 80 phone calls to the White House.

In Vermont, students at Vermont Law School in South Royalston—many of whom are members of the Food & Agriculture Law Society—organized a four-hour call-in at the student union. They want to change the Farm Bill to better support local farmers and local food networks.

But it wasn’t just consumers and activists calling for action. The National Farmers Union sent out alerts to their chapters, and other allies, including Food & Water Watch, Western Organization of Resources Councils, Farm Aid, R-CALF, the Land Stewardship Project in Minnesota, Missouri Rural Crisis Center, RAFI-USA, National Family Farm Coalition, the Center for Rural Affairs, Food Democracy Now! and others are all working together to urge President Obama to implement Fair Farm Rules.

But what exactly are these rules and why are they so important?

While walking through the aisles of the supermarket might give us the feeling that we have many options because of the sheer volume of products on the shelves, the sad truth is that most of what’s available to us has been predetermined by a food marketplace that is far from fair. Industry giants who dominate the marketplace dictate the type of meat you buy and the producers who supply it. A lack of real competition among meatpackers and processors continues to squeeze out independent small-and-medium-sized livestock producers in favor of larger, corporate operations—also known as factory farms—who consolidate the industry.

USDA has the power and they’ve had it since 1921 when Congress enacted the Packers & Stockyards Act to address market manipulation, price fixing, and other unfair practices that dominated the meatpacking industry. Unfortunately, USDA had yet to finalize the rules of the road to fully enforce this century-old law.

In the late 1990’s, even though the U.S. Department of Justice described the beef-processing industry as “highly concentrated,” they did little to change it. Mergers and takeovers consolidated the industry in the hands of a few big companies and literally changed the face of agriculture in the U.S., as these industrial behemoths now dominate the landscape.

You can see evidence of this right now by looking at the Food & Water Watch Factory Farm Map, particularly the small number of processing plants and slaughterhouses, as compared to the massive numbers of factory farms. The top four firms slaughter four out of five beef cattle. This market concentration has driven down the price farmers receive for their cattle to the point where many producers have been forced out of business. And don’t think for a second that the money they save is passed along to the consumer—it’s not.

Back in 2008, during debates over the Farm Bill, livestock producers and consumer groups pressed USDA to strengthen the enforcement of the long-ignored Packers & Stockyards Act. It took two years, but USDA finally proposed a new and updated set of livestock rules. Unfortunately, due to Congressional delays and public comment periods, these rules have yet to be implemented. Without strengthened rules, the meatpacking and livestock industry remains dominated by the corporate giants of agriculture, leaving the independent producers behind.

That’s what the national call-in day for fair food was all about—asking the current administration to nudge USDA and finalize these protections for livestock producers.

Link Reinhiller, a rancher from Hazen, North Dakota was also a call-in participant. “The livestock call-in day sent the message directly from actual producers and farmers to the White House. It’s the grassroots they are hearing, not the big money people. I think this action gave the clear message that these fair farm rules are needed to fix a century of lax enforcement of the 1921 Packers & Stockyards Act. Farmers and ranchers need these rules and they need them today.”

Reva, South Dakota rancher and Chairman of the South Dakota Stockgrowers Association’s marketing committee Vaughn Meyer wrote an excellent article for Agweek about the proposed rules. Of their critical importance, Meyer said, “With livestock production accounting for more than 70 percent of agriculture revenues, the final version of the rules will play an important roll in safeguarding agriculture as well as the sovereignty of our nation.”

People who care about healthy food don’t always understand the complexity of the rules and regulations that govern the way farmers get their products to the marketplace. While it isn’t exactly exciting dinner conversation, these rules are vital to improving the conditions for producers who supply us with healthy food. Along with the Farm Bill, they are the tools we need to make positive changes in the food industry, thus making good food available and affordable for everyone. Right now, we need to restore some fairness to the livestock industry by finalizing the rules and eliminating the anti-competitive practices that only benefit the big players in agriculture.

We cannot shop our way to a fair farm system. Consumers need to make their voices heard on these important issues. Tell your Representatives and Senators to demand fair competition. If you want your food to be produced by farmers rather than factories, now is the time to weigh in. Everyone needs to play fair, even the big guys.

Photo: Rural America calls on Obama to make markets fair for independent producers, by Lance and Erin via Flickr