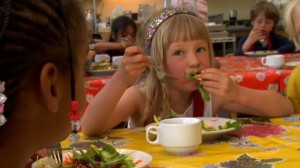 On the big screen the audience at Pacific Film Archive in Berkeley were greeted with cinematic images of children contentedly nibbling on fruit, tucking into salad, and choosing produce at a school’s farmers’ market.  But after the viewing, some adults provided a counterpoint to the rosy pictures showcasing Berkeley’s much-lauded School Lunch Initiative.

John Muir 5th grade teacher Stephen Rutherford was hands down the most critical. He talked about long, slow lines for lunch at his elementary school, the challenges for little fingers using swipe cards, the untended salad bar, the rush to eat, the vast amounts of waste, and a tense cafeteria environment.

Some of his concerns echo those raised by parents commenting on a recent Berkeleyside story on Lunch Love Community. “The day-to-day reality of feeding kids doesn’t resemble what you see on this screen,” said Rutherford. “We all had a vision of what school lunch could be and at my school it’s still very sad.”

Joy Moore, a cooking and gardening instructor at Berkeley Technology Academy, a small, alternative to Berkeley High School, said her students often get overlooked on the lunch front.

And a long-simmering resentment—that King Middle School, which houses Alice Waters’ Edible Schoolyard, the new Dining Commons, and the district’s central kitchen, unfairly receives more resources than other schools—boiled to the surface.

This discontent with the reality of Berkeley’s program reveals just how many obstacles school districts face in trying to improve school nutrition for all its students.

Still, amid the sniping and genuine frustration there was, well, a lot of love for a program that has garnered global high fives for its efforts to improve school food. 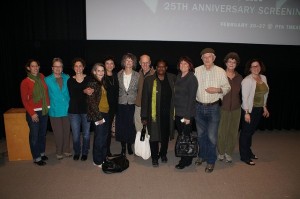 BUSD’s executive chef Bonnie Christensen good-naturedly responded to criticisms. She strives, she said, to make school food even and equitable across the district. A career culinary professional who comes from a fine-dining background, Christensen unapologetically admitted that she and her staff face enormous obstacles, including a shoestring budget, to turn out wholesome, tasty food every day. But, she argued, most of the time they do just that.

B-Tech has gotten short shift, she conceded, and she and her staff are working on ways to improve food service there. One real challenge: Equipment brought into the school to enhance meal service has been stolen in the past.

Christensen also acknowledged difficulties in John Muir’s cafeteria, noting that she spent an entire week at the school earlier this year trying to iron out problems. At King, the staff are able to serve lunch in just seven minutes, she said, and added that for a school lunch program to succeed at a site it requires the commitment and cooperation of staff from the top down.

Here’s what everyone seemed to agree on: The program is a vast improvement, if an imperfect one, on what former BUSD nutrition services director Ann Cooper inherited. At the time the lunch menu consisted of chicken nuggets, corn dogs, pizza pockets, and other highly processed fare.

Christensen, herself a BUSD parent, described a program which began with pioneering parents seeking a healthier eating environment for their childrenas a work in progress.

Moore drew knowing laughs from the crowd when she acknowledged that the success of the program came down to relationship building that grew out of years of interminable meetings. (Moore’s advice to others trying to bring about change in school food: serve something to eat at such events and you’ll have taken a first step towards building alliances and creating community.)

Four of the mini films in a series by local filmmakers Sophie Constantinou and Helen De Michiel were shown, including a new segment Feeding the Body Politic, in which former Berkeley School Superintendent Michelle Lawrence, who had dismissed a school food policy as unimplementable nonsense, describes her a-ha moment.

Early in her tenure, a student from Longfellow Middle School died during the summer break from complications related to adult-onset (formerly known as Type II) diabetes, a disease that can often be prevented or controlled through diet and physical activity.

That’s the kind of wake-up call playing itself out in American communities across the country which has helped sparked the current school food revolution. And it’s what motivates someone like Bonnie Christensen, whose work day starts at 4:30 a.m, to get out of bed every morning.