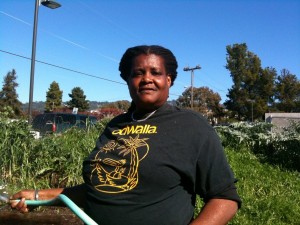 Retired City of Berkeley health outreach worker Joy Moore, 59, is anything but retired.

A long-time local food activist, Moore has played a key role in community efforts to reform school lunch in the Berkeley Unified School District, co-founded Farm Fresh Choice, which brings quality, affordable produce to people of lesser means, and was a member of the Berkeley Food Policy Council, a coalition of community and city groups founded in 1999 to increase community food access and improve health for all the city’s residents.

One of the council’s projects: Farm Fresh Choice, which provides local, sustainable fruits and vegetables to residents in West and South Berkeley neighborhoods who may have economic, transportation, or cultural obstacles that prevent them from, say, shopping at Berkeley Bowl or frequenting the regular Berkeley Farmers’ Markets. The Ecology Center serves as fiscal sponsor for both farmers’ market options.

Nowadays, Moore can be found tending the school garden, talking up healthy eating, and serving fruit smoothies and sauteed greens at the other high school in town Berkeley Technology Academy (B-Tech), designed for students who struggle to succeed at Berkeley High. She also runs an after-school cooking program at the school her grandson attends, Claremont Middle School in Oakland.

In 2007 she earned a horticultural certificate from UC Santa Cruz and she currently takes classes at Berkeley City College, with the aim of getting a teaching credential. (In the 1970s Moore attended UC Berkeley and explored theater, womens’, and African American studies programs but did not graduate.)

A volunteer producer at KPFA radio and occasional guest host for programs such as About Health, she is also featured in the film-in-progress Edible City. You can view a clip of Joy Moore’s Edible City interview.

Moore lives in a downtown apartment and is board secretary for Affordable Housing Associates. We met near her home at the Royal Ground Coffee House and continued our conversation on a walk to B-Tech, where Moore checked on the garden.

This past weekend, Moore was a special guest at the Lunch Love Community big screen launch at the Pacific Film Archive at 2:30 p.m. Lunch Love Community, which features Moore, is a series of shareable short films (which will form the basis of a pending longer documentary) about the community effort to overhaul school food in Berkeley. 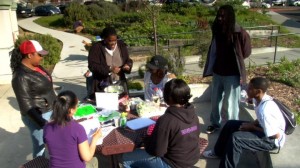 Why did you get involved in school food reform?

My daughter, who is now 36, was having dozens of seizures a day when she was younger, she also didn’t eat or sleep, and experienced behavioral problems at school.  Through a lot of trial and error I discovered that she had severe allergies to artificial colors, flavors, and preservatives. So I had to think very carefully about what she ate. When I cut out processed food her seizures subsided and her behavior improved.

But at the time, the medical establishment—which I’m wary of anyway—the school district, and MediCal tried to force me to put my daughter on Ritalin to address behavioral issues in school that they said were associated with Attention Deficit Disorder.

I never accepted that diagnosis and found a respected allergist, Ben Feingold, who supported my approach to deal with my daughter’s health concerns through dietary change.

When I saw what was available to eat at my daughter’s school–it was just terrible–I knew I had to do something to improve cafeteria food for all the public school kids in Berkeley.

How do you approach giving young people an edible education?

I’m trying to elevate the status of food and gardening in our culture. Good nutrition is associated with so much: I tell my kids it gives you muscles, strong nails, impacts mood, acne, energy—whatever it is they care about now—that’s how you reach them.

Everything we put into our mouth’s isn’t food. I want kids to know that and make smart choices for themselves. So I’m trying to raise the consciousness of all our children about food and health. My mission is really simple: it’s to get kids to value good food.

There’s nothing like biting into an organic peach and having that delicious juice dripping down your face and onto your neck. But many of our children, who only eat conventional produce–if they eat it at all–often haven’t had that experience. They’ve only known hard, tasteless produce. I try to change that.

What was your intent at the recent EcoFarm Conference panel you moderated on urban youth and food?

For people to see the positive things happening in all our communities around food and farming. When most people think of urban youth they think of crime, right? Violence, gangs, drugs. Here were examples of youth involved in food and gardening programs like Rooted in Community, Oakland Food Connection, and Urban Releaf all bringing about change in under-served neighborhoods. All young people of color. I did not have to look hard to find them. 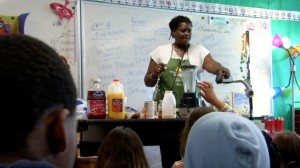 What’s good about working on food access issues in Berkeley?

The collaboration of so many people in the community working together to bring about change and make a difference. Farm Fresh Choice has always been a group effort. It was inspiring working with other parents like Eric Weaver, Marcy Greenhut, Beebo Turman, and Yolanda Huang on the city’s Child Nutrition Advisory Committee to help get rid of soda machines in the Berkeley schools and bring in farmers’ market salad bars.

What’s challenging about trying to make change in this town?

I don’t see many brown people running the programs for our people. And when someone like Alice Waters serves up barbecue at Berkeley High, as she did, and she makes shredded, pulled-pork tacos with no sauce—what I think of as frou frou food—there’s a tremendous cultural disconnect, particular with the African American students.

Some might decide to take it easy at your stage of life but you keep working hard. What motivates you?

The Berkeley Public Health Department did a study about 10 years ago that revealed huge racial disparities in life expectancy in this city. Fifty percent of brown people in this town die before age 75, compared with only 36 percent of European people, and many of those deaths are due to chronic diseases that could be avoided if people had access to nutritious food. I don’t want that for my grandsons. That’s what keeps me going.