Hearing The Call of the Land | Civil Eats

Hearing The Call of the Land 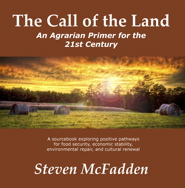 Let’s not confuse “agriculture” with “agrarianism” says Steven McFadden in his new book, The Call of the Land: An Agrarian Primer for the 21st Century. Then we might think more deeply about our relationship to the earth.

Our industrialized food system with its processed foods; confined animal feeding operations (CAFOs); long-distance distribution networks; chemical pesticides, herbicides and fertilizers; and genetically-engineered seeds (GMOs) is totally dependent on oil and technology. However, it overlooks our relationship with the land.

Basically, the book is a resource guide describing projects citizens, communities, farmers, churches, and even corporations have pursued as options to our industrialized food system. The book also provides information for readers who want to become part of a network for change.

Although Call of the Land makes for somewhat dry reading, its advocacy for an “agrarian ethos” that seeks an “environmentally sound, economically viable, and socially fair” way of life is inspiring. What this means is that we must be in right relationship with the land and organic farming is key. Its methods, even though they are labor-intensive and time-consuming, will result in wholesale social and economic reform that needs to take place in order to “heal the land.”

People are “healing the land” to make “sustainable oases” in their neighborhoods and communities because they are stepping up to provide their own leadership, gifts and talents rather than rely on government or some outside body to give them answers to our future.

“The best and possibly the only way to ensure a healthy, sustainable future is to create it,” says McFadden.

He also contends that if we choose agrarianism, we can “encircle the Earth with a sustainable culture of integrity, beauty and natural prosperity.”

Lofty words and visions but they could be indeed a means toward a more sustainable future and a closer, more authentic relationship with the land, Nature and each other.