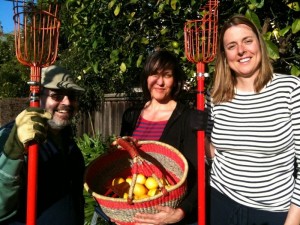 Driving around North Berkeley with Natasha Boissier is an educational experience; where others see a quiet residential area she sees streets lined with potential pickings and delights when she spots prospective bounty or familiar fruit.

Boissier is a part of a growing movement of urban gleaners who pick fruit from people’s yards (with permission) and donate this surplus produce to food banks, senior centers, and schools who can put this fresh food to good use.

Some residents view an abundant fruit tree as a problem but the 42-year-old clinical social worker sees a simple solution to excess bounty and a way to fill a community need.

Boissier grew up, in part, in Switzerland and remembers climbing her favorite walnut tree during her childhood. She’s turned her love of fruit picking into a kind of foraging philanthropy as the founder of North Berkeley Harvest.

Since the summer of 2007 Boissier and her loose-knit volunteer crew (about 30 in all, around 10 regulars) has harvested a cornucopia of fruit including apples, pears, Asian pears, oranges, lemons, limes, plums, peaches, figs, nectarines, apricots, persimmons, feijoas, grapefruits, sour cherries, walnuts, quinces, and loquats.

Word spread quickly about her gleaning for good effort after local media coverage and a nod in a New York Times story on backyard bounty finding its way to food banks. She has expanded her reach beyond Berkeley to include neighboring El Cerrito, Albany, Richmond, and parts of Oakland too.

Last year North Berkeley Harvest picked 3,602 pounds of fruit from 43 homes, many the group visit every year. During peak picking season volunteers meet about once a week.

She lives in North Berkeley with her partner and two young children. We met this week first for fruit foraging and later for lunch at Au Coquelet Cafe. 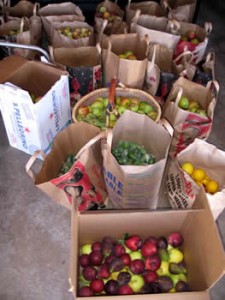 How did you get started?

I was walking in my neighborhood while on maternity leave with my newborn son and I was struck by how many fruit trees there are here, how abundant they are, and how much of their fruit is allowed to drop and rot. It was a light-bulb moment: Picking this unused fruit seemed like a natural way to address waste and deal with hunger. So I went home and wrote up a flyer. That’s how North Berkeley Harvest came into fruition.

Do you have standards for the fruit you forage?

I taste test and only pick fruit that I would eat myself. I harvest fruit that hasn’t been sprayed or fertilized with any chemicals. It’s perfectly fine if the fruit comes in funny shapes, that’s how it is in nature, but it has to taste good.

What’s the most unusual use for the fruit you pick?

We harvest grapefruits but the ones here in Berkeley don’t taste so good to humans. A woman from an animal sanctuary called PAWS collects them for her elephants. She says they eat them like bonbons.

How has this project impacted your life?

It has brought me tremendous satisfaction. I work at UCSF’s [University of California at San Francisco’s] Memory and Aging Center, counseling families dealing with dementia in their elderly loved ones. It’s rewarding work but it’s often very sad.

I’m also the mother of two young children with all the challenges that come with parenting. So sometimes I enjoy just going to harvest on my own. It’s a meditative, contemplative time for me. A very restorative hobby.

I particularly like picking fruit for seniors, many of whom can no longer climb a ladder or aren’t able to do physical labor anymore. They come out and talk with me while I work and I appreciate and respect their wisdom and experience, and hearing about the ups and downs of having lived life. These moments of connection have brought me–and I hope them–a great deal of unexpected joy.

Have there been other unforeseen benefits of this work?

Serendipity. A friend I lost touch with, Sarah Pyle, read about my work and contacted me; now she’s one of my most regular volunteers. And sometimes a resident will recognize one of the volunteers–from way back–and they’re so happy to see each other again. I love it when these kind of things happen.

Do you have a preference for where you pick?

If I have to prioritize during the busy harvest season I’ll choose to pick fruit from the homes of elderly residents, many of whom are treasures who have tended these trees for decades. There are some really old trees in town. 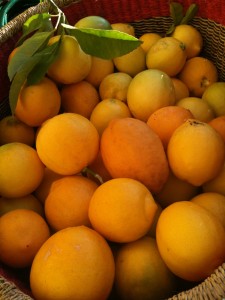 Do you have advice for others who want to forage fruit for donation?

Yes, it’s simple and straightforward. This doesn’t need to be a big, organizational undertaking. Write a flyer and put it in people’s mailboxes in your local area. Enlist family and friends for your initial harvest and start small. The only equipment you need is a ladder, a fruit picker–you can buy one at Home Depot for about $30–clippers, gloves, and some bags or boxes for the bounty. Identify some local groups that could use the fruit and get in touch in advance to find out what and how much they can accept (sometimes more isn’t better).

Have a contact person for your drop-off days but keep in mind these organizations are often staffed by low-paid workers or volunteers and there’s high turn over. They’re also very busy; so don’t expect a lot of accolades. Just deliver and go and know in your heart you’re doing good. I remember one resident at a shelter yelling at me: “Why are you bringing us fruit?” We’re grown men–we need meat!” I thought it was funny.

Have you met any interesting people harvesting?

There have been so many. One elderly couple come to mind: He’s a retired UC Berkeley expert on moss, she’s interested in lichen. I’ve been picking their apple tree for the last few years. I call her the Lichen Lady because she showed me her notebook full of these watercolor sketches of all the different lichen she’s seen in her travels around the world. They were just exquisite.

This is a place that celebrates people’s uniqueness. This town is full of intense, quirky, opinionated, and passionate people. I come into contact with some of them picking fruit. I call them the Berkeley specials. They keep things fun.

Do you have a preferred place where you like to donate?

My first stop is often the men’s shelter. I’m not sure why. They’re often last in line for services–I mean, of course, women and children first–but these men are often blamed for what’s wrong with them. I see them early in the morning standing out in the cold after enduring a night of who knows what and I want to give them a piece of fruit to offer a moment’s respite from their pain and suffering. That’s my hope: To provide something tangible, simple, and sweet in their lives.