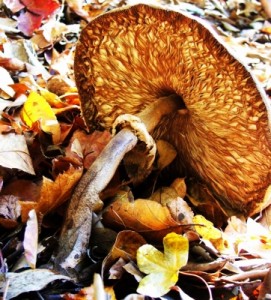 At the beginning of last December, the basement of Viracocha Gallery was brimming with some of the most exotic, rare, delicious, and even deadly mushrooms in the Bay Area. The astonishing array of fungi weren’t growing there–they were brought in by four pioneers in cultivating, cooking, and foraging mushrooms, who gathered to speak to a packed house for the last Kitchen Table Talks of 2010.

The talk began with a tasting of local mushrooms concocted by Millennium Restaurant’s Executive Chef  Eric Tucker. The audience savored a sampling of velvet pickled pioppinis, grilled oyster mushrooms, and a chanterelle spring roll in a tofu skin wrapper. They also learned why cooking mushrooms is more like cooking meat than vegetables. “The amino acid chains of mushrooms make them closer to the animal kingdom than the plant kingdom, which is why they caramelize like meat and give off a savory umami taste when cooked on high heat,” Eric explained.

While the audience enjoyed Eric’s delicious creations, mushroom expert and Merritt College horticulture instructor Ken Litchfield explained that mushrooms can be separated into four categories according to what they eat: saprobic mushrooms (live off dead stuff), parasite mushrooms (prey on the living), symbiotic mushrooms (live among tree roots and give as much as they take), and opportunistic mushrooms (some combination of the other three types).

Mushrooms that are commonly cultivated as food are saprobes. Humans are actually saprobes too. Parasitic mushrooms include cuitlacoche that grows on corn silk and cordyceps that eat out the brains of living things like caterpillars and ants.

Ken also explained that the edible part of the mushroom is actually just the “fruit” of the organism. The blob-like part under the fruit is the living organism, called the mycelium, which is like an apple tree that bears apples. Cutting off mushroom doesn’t hurt mycelium any more than picking apples would damage a tree. In many cases it actually stimulates more growth.

As the speakers talked, a steady stream of different wild mushroom varieties made their way through the audience including an Amanita muscaria, a bolete (Leccinum manzanitae) that grows on the roots of the Manzanita tree, a nameko, and the lion’s mane–also known as bears head.

From the wild world of mushrooms, the conversation turned to cultivation as Toby Garonne, owner and operator of Far West Fungi and David Law, co-founder, President, and CEO of Gourmet Mushrooms, shared with the audience how they bring delicious, high-quality mushrooms to the marketplace in two very different ways.

Far West Fungi relies primarily on human hands to create about 3,600 blocks made of red oak sawdust mixed with oyster shells, rice bran, and calcium. They are then pressure cooked and inoculated with mushroom spores. Garonne’s family has been cultivating mushrooms for more than 25 years and now sells eight varieties of mushrooms.

When David Law founded Gourmet Mushrooms in 1977, he and his partner were the first to cultivate shiitake mushrooms commercially in North America. Today Gourmet Mushrooms cultivates and sells seven types of mushrooms for the gourmet market and over 30 species for the health food market. Unlike Far West’s labor-intensive bag system, Gourmet Mushrooms employs machines to fill polypropylene bottles with sawdust, corncobs, and other feedstock, which they source around the country. Both Far West Fungi and Gourmet Mushrooms offer field trips for curious people who’d like to compare the two systems themselves.

While mushrooms can be separated into two categories, so can people: those who eat mushrooms and those who can’t stand them. But Chef Eric is finding that the latter category is shrinking as people sample more exotic types of mushrooms and realize how delicious they are. “Each mushroom has its own flavor profile. Bluets for example taste like hazelnuts.”

Toby agreed. “I still work farmers markets because I get to introduce people to different types of mushrooms. There’s a lot less fear of mushrooms now than there used to be.”

Here are some of Eric’s top tips for buying, preparing, and cooking mushrooms:

The future of mushrooms

In David’s words, “mushrooms are excellent at helping the human body cope with environmental exposure. As is well known in Chinese medicine, instead of treating symptoms, mushrooms work holistically to keep the body’s systems functioning properly in the first place.”

Toby agrees that the future will hold more medicinal uses for mushrooms. Far West is exploring the cultivation of reishi mushrooms for the medicinal qualities. But unlike mushrooms for cooking that flower quickly, reishis incubate for six months.

Eric predicts that as more people become conscientious about their environmental impact and consider eating less meat, they will discover the culinary delights of mushrooms. “People are becoming less mushroom phobic. There’s more awareness, more access to a wider variety of mushrooms being cultivated.”

David chimed in. “Not too long ago, button mushrooms were 99% of what was cultivated. They were the Folgers coffee of mushrooms. Just as consumers have become more sophisticated about the type of coffee they drink, they are getting much more adventurous about the mushrooms they eat and are seeking out a wider variety.”

But the popularity of mushrooms must grow alongside safe foraging. When asked about Bay Area foraging sites, Ken dropped a few hints: the Oakland Hills, Skyline Boulevard in Oakland, and the Richmond District of San Francisco. He strongly encouraged beginners to go with an experienced guide or a group like those organized by the Mycological Society of San Francisco.