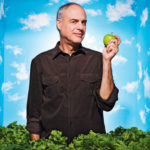 A week after penning his final article for the New York Times as The Minimalist, and just before beginning a weekly op-ed column and becoming a regular Times Magazine contributor, Mark Bittman spoke to Civil Eats about his vision for a saner and more delicious food system.

The four main issues in food right now are sustainability, nutrition, getting people in the kitchen to cook, and regulation and policy. Until a few years ago, I spent almost all of my time working on helping people to learn to cook—now I’m spending more time now working on and thinking about the others. Obviously the changes at The Times are a part of this.

It’s fine to talk about how terrific food is, to be interested in and focus on wonderful food, how it’s made, how’s it’s cooked, all the joy it can bring. The simple fact is that’s not all there is to it. Not everyone has access to wonderful food, so to focus exclusively on that is short-sighted. We need to look at policies, many of which were put in place before any of us were paying attention (or born, for that matter). Nutrition is clearly important also, as is sustainability. Silent Spring and Diet for a Small Planet aside—how far ahead of their time were those works?—many of these issues are new to many of us. Now, global warming—which in a way came out of nowhere—and peak land, peak water, peak oil, and peak food are all on our minds.

So those of us with a platform must use it. There is no more important work for me to focus on, and to see whether anything I can write or say can have some kind of impact.

A generous person might say that to some extent I’ve helped salvage the loss of home cooking over the last generations. For the first 10 or so years of my career, very, very few people were writing about good home cooking. (There still aren’t as many of us as I’d like to see.)

Those of us trying to make it fun, easy and accessible now have an opportunity for a bigger platform then we’ve had in the past. It’s important to point out that any attempt to improve the food situation in the United States must involve people cooking for themselves; only by starting with real food and preparing it outselves can we make progress.

I don’t check any blogs routinely; I rely on aggregators. Arts and Letters Daily. Twitter. Links from wherever. I read The Times every day, and I try to read the WSJ and The Guardian—mostly, though, I get distracted by links and wind up all over the place. All of this leads to some fun reading.

And I’m not reading fiction. Obviously an anti-answer but every time I try I’m finding difficulty locating the relevance. I wouldn’t argue this; I feel badly about it. But that’s how it is.

I’m currently on a mountain climbing jag. There’s a book by a Times colleague named Graham Bowley called No Way Down; insanely exciting. I think it has something to do with marathoning, which I do. But though marathoning is stressful, it’s not dangerous; there’s some dividing line in will when it comes to us and mountaineers.

I’m reading a biography of Thelonious Monk. I read the food stuff that comes along that I think is important to read. The Coming Famine by Julian Cribb was the latest; I’m about to start Hot.

I’ve worked at and with people at The Times for so long, and I’m married to a Timesian, so a large part of my community is people there. And I couldn’t be happier about that.

There’s a community of food people who are interested in politics and policy, and I feel very collegial about them, and some of those have become friends. And, there’s a running community I’m a part of; which is terrific in New York.

I also have two kids and I’m pretty close to them. And I have about a dozen lifelong friends, and a bunch of people I’m just getting to know.

Besides work, besides family, those are the two big ones, I have three hobbies: I cook—it’s a hobby as well as work, I still love it, I fly small airplanes–not as often as I’d like—and I run. I’m committed to all of that.

I think I covered this above. But I now have two new and important jobs, so I’d have to say my new goals are to be successful at them. I’m going to be writing three out of four weeks for The Times Magazine, and in that role I’ll have a pretty big portfolio; the idea is to find or create at least one fantastic recipe in each piece—not necessarily a “minimalist” one, but still one that people will be drawn to, will want to cook. But to do that I’ll have to meet new people, think in new ways, travel, and more.

And a weekly Op-Ed column? It’s a dream come true, so in a way you might say I’ve achieved a life goal. But now I have to become good at it. And frankly that makes me nervous as hell.

In food? I’d like to see a fairer form of taxation, subsidies moved from one place to another; a stronger FDA, a more sensible USDA (really, the USDA should be broken into two agencies, one for agribusiness and one for consumers); and emphasis and support of regional food and food grown at small farms, by farmers making a decent wage. Oh, and better treatment of farmworkers and animals. And, of course, an increase in home cooking and support for that. That’s already a lot, but I think we can make some progress towards those goals in the near future.

There’s currently some despondency among the world’s progressives these days, and though it’s understandable it has to be combated. The Tea Party does not have a monopoly on anger, on demonstrating, on making demands; progressives need to do all of those things. If it starts with more letters or more progressive talk shows, that’s a start. We need action to keep from despair; we need activity, and with it will come a sense of empowerment. Shopping at farmers’ markets and growing our own food is nice, but this isn’t a back-to-the-land movement—at least not for most people—this is a how-the-hell-are-we-going-to-make-big-changes movement. We have enemies, mostly in big corporations, and we have to figure out how to force them to change their ways. A detailed manifesto of this would take some time to put together, but it’s possible.

Of course two years ago, many thought Obama was going to make a big difference, but regardless of what you think of the President’s or First Lady’s efforts it’s become more clear than ever that if citizens want change it has to come from the ground up. Only we can push the government and the corporations to make change; no one is going to do it for us.

If I had to single out one person it would be Marion Nestle; she continues on an almost daily basis to inspire everyone who’s doing interesting and important things in the food world. There are a hundred other people I know who are important; there are thousands I don’t know, but hear about.

There are a lot of people whose work I like, and even envy, mostly for their analytic skills and ability to articulate things—for the most part they’re journalists and academics, both of whom have critical roles to play. People on the ground in the industry are also important–farmers, of course, but also people in food service—I’d single out the food service company Bon Appétit here (not the magazine!) who are starting to see the light. And even a few chefs.

It’s inevitable; it’s that or steady decline. The real question is “Does change happen because we win some important battles, or does it happen because the country or the world experiences some unforeseen disaster wakes us up?” I’m not rooting for disaster, but I’d guess we see either significant change or disaster—or both—in the next 20 years; food-wise, scary things are right around the corner. Typically, though, Americans need bad situations to bring about significant change.

I don’t know if the movement really exists yet; it’s just starting. It would be great if there were some loud, clear and consistent voices out there. Michael Pollan has become a force to be reckoned with, and you can tell that because he’s regularly attacked by the food industry–how great is that? Oprah, of all people, could’ve been a voice, but she caved in. Maybe she’ll give Civil Eats a hundred million bucks, which would help.

I might say that I believe Josh Viertel is doing a good job with Slow Food USA—he’s really turned it around, made it a voice for change—but that’s just beginning also.

We just need more and more people fighting for food policy that benefits everyone. Right now the so-called movement feels like a few thousand people talking about it to each other—I mean, really, who’s reading this interview? Not that it isn’t worth doing, but how do we get these notions to a broader public? We need tens, hundreds of thousands of us, making noise in public. We need a new anti-war movement, one that’s not only anti-war but pro-food and, of course, pro-justice in all arenas. This is not a small thing!

Do we need WalMart and the First Lady working together? Maybe that doesn’t hurt. But we need to build community, and two things that do that are CSAs and real co-ops, and here I’m talking about community-run supermarkets. Imagine, for example, a co-op board saying “We’re going to have a small cereal aisle and a small soda aisle; we’ll carry that stuff because some of our members want them, but we want to focus on whole foods.” And note the case here: I’m talking about whole foods and not Whole Foods!

In the 70s, I worked as a community organizer. It seems I was saying the same things: we need a bigger voice, we need more activity. It remains true; but as important as it was then to fight against the war, to fight for racial and gender and economic justice—well, gee, guess what? The same issues remain important. Food is a big one, but it’s all the same struggle; it’s a struggle for power. If this is a democracy, let’s run it. If it’s not a democracy, let’s fight it. Only by acting that way will we be moving towards real food, good food, for everyone. And I might note that when I say “everyone” I mean everyone—not just Americans but humans.

It depends on my mood. I couldn’t plan it in advance. At times there’s nothing better than a fried egg on bread with butter, or I could ask my dear friend Jean-Georges Vongerichten to cook for me or I could go shopping and cook. I don’t have a pat answer and I just don’t know. I hope I never have to plan it.