A Film that Explores The Economics of Happiness | Civil Eats

A Film that Explores The Economics of Happiness 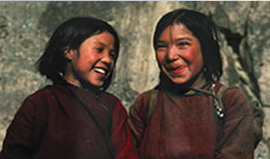 The new documentary screening around the country The Economics of Happiness says everything it should say. Ambitiously, it attempts to explain the many downsides of economic globalization, while offering actual alternatives that the viewer can get behind, and (for a movie just a little over an hour long) it does this concisely and without too much dreadful hyperbole or schmaltz. For this I am thankful. All too often, environmental themed movies rely on over-exaggerations, simplifications, and a preaching-to-the-choir sentimentalities–which result in a product unlikely to perform the educational (that’s entertainingly educational) role it was made for.

Director Helena Norberg-Hodge and her team use the case study of the Ladakhi people from the high-altitude regions of India, Pakistan, and China (whose traditional, sustainable, joyful, tightly-knit community lifestyle has been disintegrating since their introduction to the products and values of modern global capitalist culture) to illustrate their criticism of globalization, without overly romanticizing the Ladakhis or failing to address pro-globalization arguments.

The film’s analysis of the negative effects of globalization is spot on, citing eight main outcomes: mounting unhappiness in the industrialized world; feelings of insecurity for those who are not leading industrial-world lives; unsustainable use of resources; climate change; loss of meaningful livelihoods, especially farming for those in the “developing world”; increasing inter-group conflict; handouts to big businesses; and a false accounting of progress. The film contains effective explanations for how corporately-controlled global trade causes these results, including Hodge’s brilliant metaphor of how our “arms are so long we don’t know what our hands are doing.”

I have reservations regarding the use of climate change as an discursive tactic for getting people to make societal change toward sustainability. That being said, these other effects are clearly perceptible to the average person. With even a little effort to look at the world as it is, whether through scientific studies or personal experience, a reasonable American could see that these effects are real, and by watching this film could be convinced that they are a direct outcome and corollary of global capitalism.

The solution the film offers–economic and political localization–is one that we’ve heard for some time and with substantial frequency in the sustainable food world. Refreshingly, the film even includes a critique of the “buying our way out of the mess” argument which too often circumscribes the limits of sustainable foodies’ activism. And so I can heartily recommend this film as an activist tool, for introducing emerging or tentative foodies to the larger economic context of local, sustainable foods (and how to actually create more sustainable systems in general).

I do have one issue with the film, which isn’t really so much about what it says as what it doesn’t cover (and–as a filmmaker–I know this can be due to limitations of time, capacity, and/or the need to focus a film on one audience). That issue is that this film, like so many others coming from the environmentally-aware left, doesn’t ask the hard questions of how to actually leverage large-scale change. The film mentions the influence of corporate capital on our political system (which continues to be depressingly evidenced in all sections of government), but offers no ideas for how to counter this. It offers alternatives to the false accounting mentioned earlier, that of Genuine Progress Indicators (GPI) or Gross National Happiness (GNH) instead of the grossly inaccurate Gross Domestic Product (GDP). But how to actually get governments to implement those measures, when those in charge are completely enthralled with and beholden to the ideologies of endless growth and “free” markets?

Something else kept haunting me as I watched the film: “the masses.” Globalization is no doubt the hegemonic ideology of our time, and the masses (at least its vocal, politically active members like Tea Partiers) have bought the line, practically without reservations. I believe that the biggest question for the anti-globalization (or better, the pro-localization) movement is: how do we change this? Can people be convinced to break from ideologies that don’t serve them? Can “everyday” Americans (those who this film claims to be at their unhappiest level of the past 60 years) be convinced that localization is a preferable alternative? More importantly, perhaps, can they be convinced that it is actually possible, and not just a hippie pipe dream?

The sad reality is that these questions are much easier to ask than to answer. I ask them not to try to seem like I have it figured out, but to honestly plea for continued conversation from those who would like to see humanity and the planet “saved.” We know the problems, and we think we know the (physical) solutions. Now, how do we get from here to there? I have a feeling that, at minimum, it will involve a lot of education. And for that, this movie is a great start.