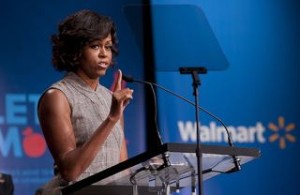 Because Walmart is the largest force in groceries, it is widely assumed that these new voluntary standards will be met by a bevy of suppliers and food producers extending beyond the retail giant, which on its own attracts about 140 million American shoppers each week. The impact that Walmart’s standards have on the marketplace is hard to overstate.

As Michael Jacobson, executive director of the Center for Science in the Public Interest, told the New York Times, “A number of companies have said they are going to make voluntary reductions in sodium over the next several years, and numerous companies have said they are going to try to get trans fat out of their food. But Wal-Mart is in a position almost like the Food and Drug Administration. I think it really pushes the food industry in the right direction.”

“Those two moves by Walmart ultimately should save thousands of lives each year that might otherwise be lost to heart disease or stroke,” Jacobson added, in a statement from CSPI Thursday.

Though Walmart’s pledge to reformulate its brand name products gained the most media attention yesterday, keen food politics observers believe the corporate heavyweight’s commitment to reducing the price of fruits and vegetables is the most radical part of the new plan, which is being dubbed the “nutrition charter.” Walmart says it will save customers $1 billion annually on produce alone and work to “dramatically reduce or eliminate” the price premiums on healthier processed foods.

“The idea of making fruit and vegetables more affordable could actually make a dent in the obesity problem by helping Americans to eat healthier,” writes BNET’s food industry guru Melanie Warner. “Too bad neither Walmart nor Obama seem to want to address the root causes of why whole foods like fruit and vegetables are often more expensive than comparatively unhealthy, processed foods.”

Walmart executives insisted they would not squeeze produce growers or hurt small scale, local farmers, but would accept lower margins and improve efficiency in the supply chain. When asked specifically about the impact on their efforts to boost locally sourced produce, the company’s VP of sustainability, Andrea Thomas, said local food could save the company money.

“There’s a lot of things through the supply chain that add costs. If you have fruits and vegetables traveling long distances that actually adds costs,” said Thomas, during a Q&A with reporters. “With local farmers, we can supply [directly] great products to our stores, the quality is great and they don’t have to travel as far so we save money.”

Overall the food and nutrition community welcomed the initiative, though some expressed skepticism about the company’s intentions and the implementation of the plan. Walmart will work with the Partnership for a Healthier America–a foundation dedicated to mobilizing the private sector, NGOs, and thought leaders to partner with the First Lady’s Let’s Move! campaign–to issue public progress reports.