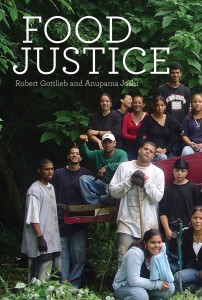 You’ll never look at food the same way again. That is the unspoken promise of the book Food Justice, by Robert Gottlieb and Anupama Joshi, respectively the director and farm to school director of the Urban & Environmental Policy Institute (UEPI), at Occidental College in Los Angeles.

Published in October 2010, Food Justice takes the reader through a narrative analysis that relates the struggles and triumphs of food system change in the United States and abroad. Food Justice is about how, what, and where food is grown and processed, and who gets it.  It’s about the pieces of our history that have come to shape the lives of the world’s hungry, its minority and migrant populations, and our food cultures, and what individuals and organizations are doing to change it.

But even as victories are won in the tomato fields of Florida, ending conditions of modern-day slavery for migrant farm workers, and in the schools of New Orleans, as students fight for healthy, locally-sourced meals, can we answer the question Michael Pollan couldn’t when President Obama asked him, “Is this a movement?” (pg 79).

This simple question, posed throughout the book, is the point from which the authors weave the web of food justice issues, revealing an answer that is at once complex yet accessible.  The authors set out to uncover the common language and unifying themes that define and encapsulate the move to transform the food system.  They argue the need to work united at all levels–from seed to plate–in order to effect change.

With this broad, yet crucial foundation, the authors launch into part one–an intuitively laid out, historical analysis of food injustice.  From the flight to suburbia to the building of corporate food empires, what becomes clear is how these modern-day monuments of American (and increasingly global) culture have impacted the ability of people to justly grow, produce and access fresh, affordable food.  Globalization, the movement of corporations abroad and “local” and “organic” marketing ploys further complicate and confuse the consumer, but are here laid bare.

In part two of Food Justice, the authors plant the seeds of inspiration.  We are told the inspiring story of the Nuestras Raíces organization, for example, whose growing crew is pictured on the front cover.  Faced with poverty and food insecurity when jobs in the once prosperous town of Holyoke, Massachusetts, moved overseas, this largely Puerto Rican community tapped into its farming roots and created a community garden. More than a decade later, the organization has increased its impact through the use of a 30-acre farm, farmer training, youth empowerment programs and small-business incubation.

Like Nuestras Raíces, similar groups have formed to tackle not only food insecurity, but farm worker rights, environmental degradation, economic viability and social policy.  In showing what has come before, the reader is given a road map to what can be accomplished and how we might, by way of an all-encompassing food justice movement, get there.

This book has something for everyone–the farmer, the college student, the foodie, and those just beginning the journey to understand where their food comes from and why it matters.  My only caution to readers is that the mass of information provided through the multitude of stories may become overwhelming. That said, this book’s grand sweep of food justice from the early 1900’s to today is like no other on the shelves, offering food for thought and plenty of opportunity for further research.

A tell all narrative that clearly elucidates the issues and what we can do to reshape the food system, Food Justice is a must read for everyone who eats.  So, is this a movement?  Read Food Justice and find out.