In the Lower Ninth Ward, Rebuilding a Community Starting with the Soil | Civil Eats

In the Lower Ninth Ward, Rebuilding a Community Starting with the Soil 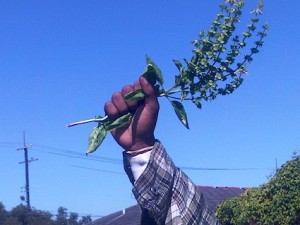 Community is at the center of the good food revolution, and the Lower Ninth Ward section of New Orleans is home to one of the more extreme examples. Five years after Hurricane Katrina broke the levees–flooding the neighborhood and forcing its residents to decamp elsewhere–the area, largely frozen in time, has become home to a thriving community of urban farmers aiming to improve the quality of life of its residents.

I was in the neighborhood recently on a tour arranged by the Community Food Conference, a four-day event in October offering panels on different aspects of food policy. My tour guide, Jenga Mwendo, grew up in the Lower Ninth, but was living in New York City when Katrina hit.

“I quit my job, sold everything and moved out to New Orleans with the intention of finding some way of being a contribution,” she said. Mwendo had purchased a house in the Lower Ninth as an investment property just weeks before the storm, and so began by rebuilding it. Next, she decided to figure out who owned the abandoned properties near hers. “I decided that I was going to single-handedly revitalize my block,” she said.

Statistics reveal that only 25 percent of residents have returned to rebuild. As a result, abandoned houses dot the neighborhood, services and infrastructure are sorely lacking, and there is a lot of land. This has made the Lower Ninth prime for urban agriculture–which, for Mwendo, has been key to rebuilding and bringing together the community.

Through her work, she has brought back to life an existing garden, started a new one, and created the Backyard Gardeners Network, which connects gardeners to resources and to each other. She also helped facilitate the planting of 175 fruit trees. [You can read more about her work in an interview I did with her recently for Grist.]

“The more people that I spoke too, especially the elders, the more I realized that [agriculture] was really an integral part of the history of the Lower Ninth Ward,” she said. “This whole process has been an opportunity for me to reconnect with my past and know New Orleans in a way that I never knew it before.”

In communities of color, where one in two people is now predicted to become diabetic in their lifetime and where there is often a strong history of agriculture, community gardening projects can have a huge impact–especially in places like the Lower Ninth, which doesn’t have a single grocery store. “I see the gardens as opportunities to come together, work together, and do things that are going to be beneficial for our neighborhood,” said Mwendo.

Nat Turner also made his way to New Orleans from New York City in the wake of Katrina. First he came as a history teacher bringing his students there for volunteer projects, and then later he became a resident and founded Our School at Blair Grocery, a school housed in a former grocery store.

“There were kids falling through the cracks, so I said, let’s start an independent alternative school,” said Turner. Agriculture is used as a tool to help students, who have dropped out of traditional school settings, develop work skills.

As Turner tells it, the idea of using food as a teaching tool was originally about providing access to produce. “People in the neighborhood want bell peppers, okra, and shallots,” he said. So he built vegetable beds, chicken coops, and greenhouses where the students participate in a sprout-growing operation for local restaurants.

In addition, he saw that there was a need to create jobs. “There is nowhere for black teenagers in New Orleans to find a job,” said Turner. “There is probably a 70 percent unemployment rate in our neighborhood.”

Each day at Our School, in addition to studies geared toward passing the GED exam, students plant, harvest or deliver sprouts grown in their greenhouses to restaurants all around the city. The farm’s model is inspired by Will Allen–a Milwaukee, Wisconsin urban farmer who builds intricately diverse growing systems that provide fish, vegetables and rich compost year round to residents. Through their work, students learn business skills–and get to rub elbows with famous local chefs like John Besh of restaurants La Provence, Lüke and August. After he took a tour of the school recently, Turner said, Chef Besh said that he “wants to buy everything that we can possibly grow for his restaurant.”

The school benefits from around $2000 per week from these restaurant sales, which helps subsidize local sales, and the students take home a stipend of $50 per week along with other benefits like paid cellphone bills. As a result of this work, three blighted lots in the neighborhood have been turned into productive farmland. And they are expanding–having just received notice of a three-year, $300,000 community food project grant from the USDA which will allow them to increase their growing capacity, take on more students, and pay for building repairs.

Both Mwendo and Turner agree that the government has a role to play in improving the quality of life in the Lower Ninth. “It would be really nice if they could release some of those federal dollars around fresh food retail outlets in under-served neighborhoods,” said Turner, who is also looking for the government to make it easier for groups like his to access blighted land.

Volunteering for an afternoon at Our School, I found myself standing up to my ankles in rotting fruits and vegetables, cardboard, and coffee grinds at the giant compost pile that would become a new farm field in the spring. Four of Our School’s students–all boys–and one teacher explained the difference between “green” matter and “brown” matter (the green matter being the food waste, containing nitrogen, and brown matter the cardboard and wood chips, containing carbon). All four of the students were different sizes and ages, and all worked diligently together to complete the project.

Indeed, composting seemed like an apt metaphor for the changes happening in the Lower Ninth. Instead of standing by to watch a neighborhood slowly disintegrate, urban farmers are breaking down food waste into a productive medium in which to grow. While the stand-off continues between business owners who wait for the population of the neighborhood to increase, and people who wait for amenities like grocery stores and schools to open before they move in, activists like Mwendo and Turner will continue to grow community at the grassroots: starting with the soil.