To Eat Or Not To Eat: Wyoming’s Right To Choose What’s In A Spoonful | Civil Eats

To Eat Or Not To Eat: Wyoming’s Right To Choose What’s In A Spoonful 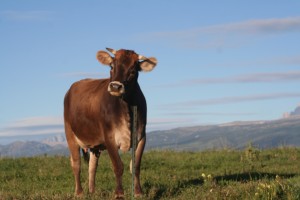 Good food practices are alive in our world today. We roam farmers markets to find new recipes for familiar produce. We know that once we have seen a farm operation that treats its animals with respect that the meat produced there is the meat we want to serve at our dinner tables. And, we learn from annual potlucks, where a well-guarded family recipe makes its only public appearance, what community culture really means. In Wyoming today, 2011 marks a crucial time in state history, when citizens are fighting for their right to eat free.

Many assume that there’s an unwritten but generally accepted contract between a producer and a consumer which guarantees that one’s purchase is of the best possible quality. When food outbreaks prove this supposed truth to be false, large food corporations swiftly handle the problem, in order to maintain power. This route seemingly protects the health of a consumer without stifling large licensing programs.

But since the 2009 Food Safety Laws were adopted, the state of Wyoming has endangered small producers, banned potlucks, and made it illegal for an individual to drink a glass of raw milk from his neighbor. If Campbell County Representative Sue Wallis has any say in fighting the law, the state may witness improvements for farmers markets and maybe–just maybe–win the right to drink a glass of raw milk without being considered a criminal this year.

In April 2010, the Teton County health department demanded that a local raw milk product be removed from a hybrid organic and conventional grocery store. Paradise Springs Farm, the Idaho dairy in question, is located about 25 miles from downtown Jackson and maintains the cleanest milk in the state, according to state inspection standards. The farm also adheres to Demeter’s biodynamic requirements. The current Wyoming Food Freedom Bill would facilitate distribution to knowing raw milk consumers but would not enable retail outlets to carry the product on a store floor. The new bill does not address interstate commerce at all. Raw milk availability, regardless of the bill, is still unsure.

The Food Freedom Bill has changed significantly since Wallis first authored it in the 2010 session as an individual bill with a number of co-sponsors. “The bill sailed through the House, but was met by stiff resistance in the Senate Committee because the Department that regulates food inspection took it upon themselves to inform every meat processor in the state that the bill, which in our opinion has absolutely nothing to do with their business in any way, shape, or form, would cause the federal government to pull Wyoming’s designation as a meat inspection service that would not meet USDA standards since it would allow for the sale of un-inspected meat between two private individuals,” she explained.

“This created a situation where it was obvious we needed to spend more time on the bill. The Senate committed tabled the bill with the suggestion that it be taken up as an interim topic for study. That is exactly what happened and it was assigned the number one priority by Management Council as to what the Ag Committee should look at over the interim. The result was a total of three separate bills sponsored by the Ag Committee: HB 8–Wyoming Traditional Food Act, HB 11–Wyoming Food Freedom Act, HB 17–Raw Milk.”

Though these bills can be tracked online, many individuals feel food advocacy in general will lose some of its grounding when and if Michelle Obama is no longer in front of the camera talking about school lunches. But from Wallis’ perspective, “for the bulk of Wyoming consumers, Michelle Obama and Jaimie Oliver have little, if any, influence whatsoever. Wyoming consumers for the most part have a very clear view of how food is produced in this country, and they know that the food they see being raised, grown, and harvested by their neighbors is high quality. They want access to that high quality food, and quite frankly have little trust in the gigantic corporate interests in other states that produce food behind closed doors and by questionable means.”

A great deal of Wyoming’s food advocacy gained momentum in April, when the Teton County public health department took incredibly extreme measures to carry out Food Safety Rules. Gag ads for potlucks hosted by the public health department even appeared in Jackson Hole’s local paper through the summer. “It becomes a bit hard to ignore or dismiss when so many good, honest people are standing up and speaking out and demanding the right to buy food from who they want, and that has been produced in a way that they approve of,” said Wallis.

But the Wyoming Food Freedom Act addresses more than just access to your regional producer: it’s asking for legislative support to encourage development for small time producers. This is the central issue for Wallis. The problem with the current food safety rules is that they don’t encourage business development for small producers; instead, they lean towards dependence on products available through large-scale distribution.

“This is what I see as the central problem with the regulatory environment we have today,” she said. “These regulations should not be labeled Food Safety Rules, they should be labeled the Big Business Protection Act. For instance, why is it safe for a livestock owner or a hunter to have their animal processed at a custom processing shop, but not safe for that meat to be sold to someone through a commercial outlet? If it is safe for one, it is safe for the other. So obviously, the only difference is that costs are much higher, and inspectors get fully employed but the food is no safer because of it.”

Wallis continued, “I think that the political environment is ripe, especially in Wyoming, for wresting back our fundamental rights in regards to how we feed ourselves. I predict passage.” She isn’t necessarily being optimistic—she’s realistic. Wyoming citizens are getting fed up with their liberties being hindered, especially in a state with an incredibly strong agricultural inheritance and a state motto that claims ‘equal rights.’”

Robert Harrington, director of the Casper-Natrona County health department, claims that while examining the risks in opening the “flood gate” on regulation in reference to the Wyoming Food Freedom Act passing, “we keep getting sidetracked with the assumption that somehow nonprofit status makes an event immune from contamination.” But has anyone died from a purchase at a farmers market or even got sick? The department of health maintains records of all of the food borne outbreaks in the state of Wyoming. There are zero outbreaks associated with farmers markets, and only a tiny number associated with any sort of church or nonprofit function.

The first Senate Agricultural meeting on consumer liberties took place yesterday. Topics debated: the promotion of purchase and consumption of fresh and local agricultural products, development of the agricultural economy, and encouragement of agri-tourism. These good food practices would provide Wyoming citizens with unimpeded access to healthy food from known sources and encourage the expansion and accessibility of farmers markets, roadside stands, ranch and farm based sales, and direct producer to end consumer agricultural sales. Is it altruism? I think not. Hopefully, these liberties stand for a change in policy.

Victoria received her MFA in Creative Writing from UNLV. You can follow her new blog at http://tradingdiamondsfordairy.wordpress.com. Read more >